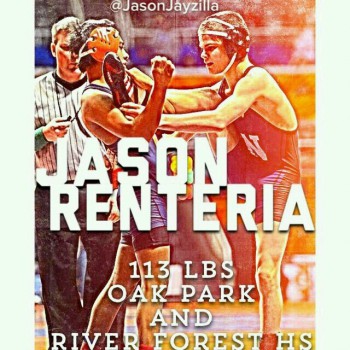 Back in September we saw a recruiting first for Tom Brands, as he picked up a verbal committment from junior wrestler Kaleb Young. Even a month later when Alex Marinelli switched his verbal from Ohio State to Iowa, he would qualified as the earliest verbal in Brands history.

Today, Jason Renteria blew both of them out of the water as the sophomore from Oak Park River Forest announced his intentions to wrestle for the University of Iowa. Our own Tony Hager broke the news:

Jason Renteria Ranked 10th on Soph big board, Ranked #1 in WIN magazine has committed to the #Hawkeyes

I am proud to announce that I will further my athletic and academic career at the University of Iowa #gohawks pic.twitter.com/L9h3qe9mp4

Jason is from OPRF and is projected at 125lbs. Was 2nd place last year at 106lbs. Super 32 Middle School Champ #Hawkeyes

All of this should be good news because if Renteria’s ranking holds he would guarantee at least three straight years Brands has landed at least one top ten recruit (#10 Mike Kemerer – 2015, #8 Alex Marinelli – 2016). When you take into consideration that Brands doesn’t appear to be done adding recruits for this year, Brands is setting himself up for multiple top recruiting classes. While rankings can be just a number, it is also important to remember that the number is based off of the talent level of the recruits brought in.

Another important item is the high school that Renteria attends, OPRF. Not only is it current Hawkeye Sammy Brooks old stomping grounds, it annually produces top end talent, including multiple D1 All-Americans and top recruits over the past few years. Iowa has now officially tapped one of the best wrestling clubs in the nation (Young Guns in PA), and two of the nations’ prominent high school programs (Marinelli’s Graham OH is the other top high school program).

Iowa fans should be excited to watch Renteria’s career develop, and they can get their first chance to watch him post-verbal this weekend at the Super 32 tournament.