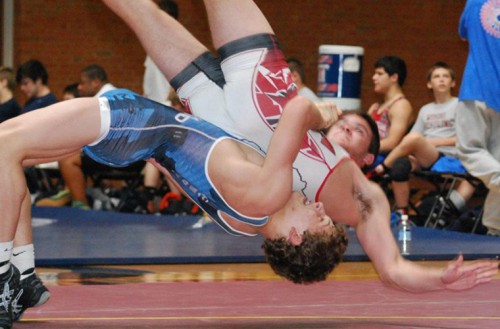 As we mentioned on the holiday, UNI received some fantastic news that Georgia state champion Taylor Lujan had committed to Doug Schwab’s program. I got the opportunity to talk with Taylor and his mom, about his commitment.
I asked his mom: Iowa is quite a trip from where you live, what was it about Schwab that made you feel so comfortable about your son deciding to move and wrestle in Iowa?
We have known Doug through our club program, The Compound, for more than 5 years.  We have developed a nice relationship with Doug and know that Taylor will be happy and well taken care of at UNI.  My husband and I came along on Taylor’s official visit and fell in love with the place and the coaching staff.  We couldn’t be more pleased with his decision to spend his college career at UNI with Coach Schwab and his team.
How did you first become involved with the sport of wrestling?
(Now Taylor’s responses) I got started in wrestling back in 4th grade when I was at school and they were giving out pamphlets. On the inside it had all the sports the county offered for everyone, and wrestling got my attention. I remember my dad telling me stories about how he use to (wrestle) and (he) was a all-American in college. I brought it home and and asked if I could wrestle, and my dad said I could.
What other schools were you looking into, before you chose UNI?
I was looking at Minnesota, Nebraska, West Virginia, Rutgers, Missouri, Arizona state, and Penn State.
So why the Panthers?
UNI felt like home to me. I really liked how it was a old town, and how they’ve been wrestling in the same building for the past 50 years. I loved how close the team was it really felt like another family when I was there. It was a lot different from any other college I had been to in the best kind of way.
Schwab bring a ton of intensity and energy to everything he does, what are your thoughts on him?
I think Schwab is a great guy! He doesn’t just care about you as a wrestler but he does as a person also. I like how fired up he gets in the wrestling room. He’s the kind of coach that I think will out-work any other coach.
What weight are you looking to wrestle in college?
I think I’ll be a 174 pounder.
You will be traveling a long way from your home state to where you will be competing in college, what helped you make that decision to move so far?
Nothing really, I just kind of figured I’d have to move far from home if I wanted to wrestle. I was never bothered by the thought of it.
What wrestler/coach are you most excited to work with in the room?
I’m excited about wrestling with everyone in the room.

Anything else you want future Panther fans to know about you?

Panther train!
***
There are A LOT of great comments in there and if you are a Panther fan you have to be excited about what he is saying. When a top 25 recruit from another state starts considering UNI, usually it’s enough to take notice. What Schwab brings to UNI is one of the hardest things to replace at any program, intangibles. The word get’s thrown around often, but think about how wrestlers don’t want to come to UNI just because of him. They want to come to a program in which Schwab has molded his team into a family. A family that wrestlers wan’t to be a part of.
Panther fans, it’s time to get fired up! Schwab has got the Panther Train a rollin’ and at this rate nothing is going to stop him from having one of the top programs in the country.

2 thoughts on “OVERTIME with Taylor Lujan”