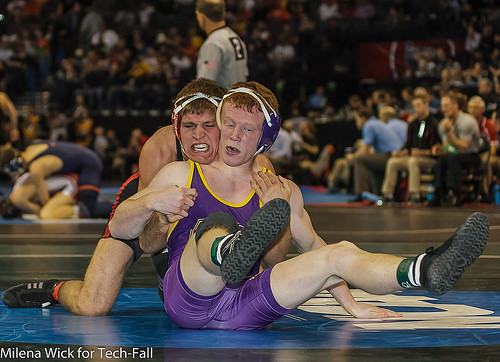 Ross: Here at IA Wrestle we are proud to announce that we have added another contributor in Nic Ryder, specifically for the University of Northern Iowa. You may have seen Nic’s first contribution to the site here. Nic is going to give his thoughts on the 2014-15 Panther squad and I think our readers will really enjoy the insight that Nic brings to the table. Today he is previewing the second half of the lineup, and we’ll post the first half tomorrow. Without further ado, let’s talk Panthers!

It’s Cooper Moore’s job to lose for UNI. The redshirt sophomore from Minnesota has some great accomplishments – MAC Champion, NCAA Qualifier going 1-2– but I think if you’d ask him he would say that he still has work to do. An early-season win over Steven Monk from North Dakota State really set Moore on the right track, but he lost twice to Monk over the rest of the year. I see Moore a little like I see Dylan Peters; very, very good, but not yet great. He has to prove himself to be a top contender at 165 nationally. If he can face (and beat) some good competition in Las Vegas, like ISU’s Michael Moreno, Iowa’s Nick Moore, Virginia’s Nicholas Sulzer, and then beat a good wrestler in Dylan Palacio in New York later this year he’ll be a force come March. Despite the MAC being weak at 165 he will have the opportunity to wrestle top opponents throughout the year. Moore will be pushed though, Curt Maas from Medford High School in Minnestoa will be after Moore all year. Maas placed in 6 of the 7 open tournaments he was in last year, winning the William Penn Open. I wouldn’t be surprised to see him out in a few duals this year, maybe even a conference meet or two, but he’s going to have to work his tail off to get Moore off the top spot.

MAC Outlook – The MAC has very few quality contenders at 165. Harrison Hightown from Ohio is probably the only real competition that Moore will have in-conference, and Moore beat him twice last year, once by fall, and in the MAC championship 11-5. Outside of Ohio the next best wrestler the MAC has is Jordan Gagliano, who went 3-3 in the MAC last year, but did not wrestle Moore. Moore is the class of this weight, and there’s no reason why he can’t repeat.

So the big decision here is whether or not Cody Caldwell will move up to 184 or not. Caldwell took 4th at the MAC Championships last year and qualified for the NCAA’s. He lost both matches he had against the MAC’s top seed Bill Curling from Old Dominion, and again both to Ohio’s Cody Walters, who was the MAC Champion and the 8 seed at the NCAA’s. The Panther went 7-5 in conference last year and 17-15 overall, and he’ll have to improve on that if he wants to keep his place, as both Kyle and Erik Lux have their eyes on him. Kyle wrestled mostly at 184 last year in open tournaments and few conference duals, but I would expect him to try to get back down to 174 and challenge for the top spot, as 184 seemed a little too big for him last year. His little brother Kyle might be ready though, expect him to be in the mix as well. It would surprise me if we didn’t see somebody else at 174 other than Caldwell at some point during the year, but we can’t rule him out of the mix at 184 either. After looking over 184 for the Panthers, I would look for Caldwell to bump up.

MAC Outlook – As I mentioned earlier, Walters is the top of class in the MAC. The junior is looking to repeat as champion, and improve his seeding in the NCAA’s. The MAC received 5 bids last year, and that might go down a one because of Curling’s graduation. However with Mike Ottinger (Central Michigan) and Mike England (Missouri) still in the mix the conference should still get at least 4 spots, which I think puts UNI right in the mix no matter who takes over the top spot. I’d expect UNI to make the NCAA tournament at 174 again this year.

Once again, this is where we make the decision on Caldwell. Whoever takes over here has some big shoes to fill. Ryan Loder had been the rock that the rest of the squad was built around. Unfortunately Loder’s career in purple and gold fizzled out; he was out most of last year recovering from back surgery, taking 2nd in the MAC and bowing out one round before becoming an All-American.

I think I like Caldwell at this weight. Like I said before I think Erik Lux might be a little bit more comfortable at 174, and the only other real option here is AJ McBroom, who (oddly enough) pinned all his opponents in his victories (6) but he also lost 6 matches on the year. Chase Shedenhelm is the only other 184 pounder on the roster, he went 4-10 last year, but I’ve never seen him wrestle. If I’m forced to name a starter here (which I suppose I am) I’ll take Caldwell here, and then Kyle Lux at 174.

MAC Outlook – Jack Dechow from ODU is the class of 184 for the MAC. He returns after getting 4th at the NCAA’s last year, beating the 4th seed Max Thomusselt of Pittsburgh. He lost a close one to Jimmy Sheptock (Headlock Sheptock!), then went on to beat Kevin Steinhaus from Minnesota to advance to the 3rd place match. He dropped a 5-4 decision there to Gabriel Dean of Cornell. He’ll be back this year and will probably have good shot at making the finals since the top two in the nation are out, and only 4 of the top 8 return. Missouri’s John Eblen was Dechow’s only conference loss last year but he wasn’t in the MAC tournament. If Eblen can stay healthy he might be Dechow’s best competition.

The MAC got 5 auto spots for the NCAA’s at 184 last year, and even if it goes down one with Loder gone, that leaves 4 spots for Caldwell and the Panthers, and I think they get it done. I don’t see Caldwell getting any lower than 3rd in the conference tournament, and depending on how much muscle he has gained I could see him challenging Dechow for the top spot.

This is probably the weight that UNI needs the most help at, or where they can show the most improvement over last year. Basil Minto took most of the bumps last year, going 3-7 in conference and 15-13 overall. Minto didn’t look like he was comfortable working a “Schwab style” match in the duals I saw him in. That is to say he wasn’t attacking, and wasn’t always working for those extra points, and that’s not a knock on him, I just don’t think it’s his style. The Panthers have a second guy waiting for the full-time spot and that’s Jared Bartel. Bartel wrestled last year in the MAC championships, placing 6th, after Minto was the dual guy the entire year. Seems like an odd situation, but I would look for Bartel to be the starter from day one, unless Minto has really changed up his strategy.

MAC Outlook – The MAC has returning NCAA champion J’Den Cox from Missouri returning, so whomever the Panthers put out there has their work cut out for them. The freshman Tiger ran through the conference last year, only losing once to Ohio’s Phillip Wellington. Cox’s only other loss was to Iowa State’s Kyven Gadson in sudden victory. With the MAC only getting two spots last year and Cox and Wellington being at the top it’s tough to see UNI getting a guy to St. Louis at 197 this year.

Heavyweight Blaize Cabell looked strong (at times, very strong) and quick last year in his new role at 285. He wrestled well and wasn’t afraid to go after a shot or two in a match, especially against bigger opponents. While he didn’t have the success that Peters or Colon did, Cabell wouldn’t back down from a tough opponent. After losing in the quarter finals in the MAC tournament he wrestled back through two matches to claim 3rd place and qualify for the NCAA’s.

He had to face number one seeded Tony Nelson from Minnesota in the opening round, and Cabell put up a good fight; going neutral in the third after Nelson got up from underneath in the 2nd. Cabell couldn’t put a full shot together though and lost 1-0 to the national runner-up, who went on to pin his next two opponents in the tournament. Cabell went on to lose in the first round of the wrestlebacks to Joe Stolfi of Bucknell, but I believe that the experience of wrestling the number one guy and getting to the NCAA’s will motivate Cabell to get stronger and more technically sound for the coming year. I like Cabell to be the starter the entire year for the Panthers.

MAC Outlook – The MAC champion, Jeremy Johnson from Ohio, graduated last year, which frees up a spot at the top of the conference. 2nd place finisher Devin Mellon, from Missouri, was a little bit more consistent last year than Cabell was, but Cabell owns the head-to-head, beating Mellon 6-5 at last years dual meet. These two will be the top of the class this year, with Matt Tourdot from Old Dominion behind those two.