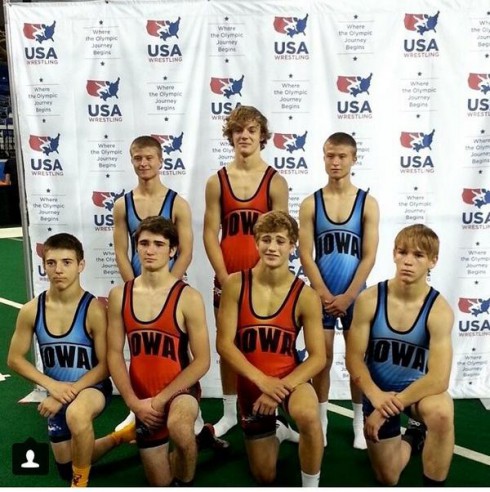 Team Iowa had a pretty good Cadet Greco tournament, as they landed 7 Fargo All-Americans, though that medal round wasn’t pretty as Iowa lost all of their matches to end on a bit of a sour note.

Drew West(106) opened his finals match up with 5-0 throw, but from there was unable to get anything else going. Timmins picked up a takedown, and a big throw of his own to take the lead and from there he sealed it with a pin. Bryce West(113) also led his match off with a big move, before ending the first period down 8-6. Bryce was able to tie the match up at 8-8, before losing 18-8. Anthony Sherry (152) lost his match 11-0 to finish second.

It wasn’t much better on the backside, as Nathan Lendt (106) and Ryan Leisure were victim of pins. Billy Higgins (138) was trailing 8-0, when he hit a four point throw to make it interesting, but in the end he lost by fall as well. Tristan Johnson (145) had a rough go in his match, as he was hit for a five point and four point throw before being pinned.

A couple things to note before these young men take the mat for freestyle. Three finalists ranked 2nd among states (behind Illinois with five, and Minnesota with four). Ryan Leisure had a great run, after losing his first match of the tournament, he strung together eight wins in a row to reach the consolation finals. I was really impressed with his performance. And that’s not to take away anything from Higgins, Lendt, and Johnson, who also lost early on, and had to battle back to make the stand as well.

Thanks to All-American Billy Higgins for the AA photo: