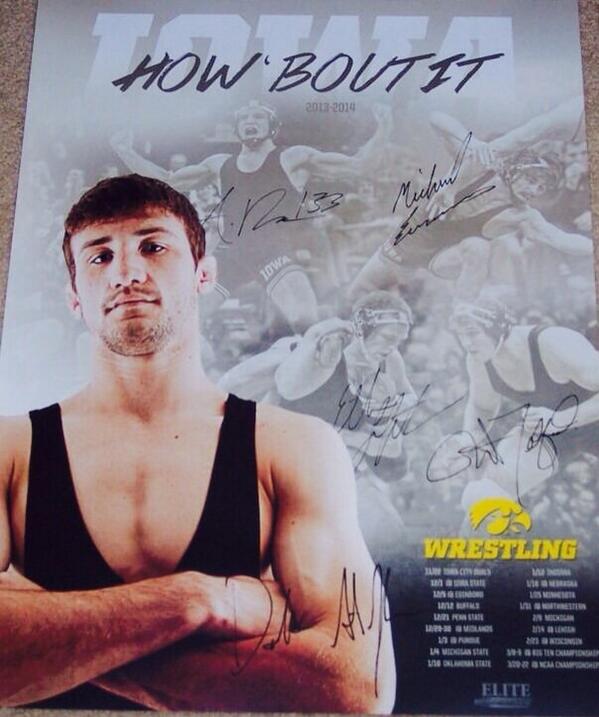 We had the opportunity to sit down with Derek to answer some of the fans questions from Twitter.

@hagertony is doing an #IOWAswag giveaway! Retweet this tweet to be entered. At 5000 followers we'll pick a retweeter pic.twitter.com/NmA44GLGPu

Just a few months after joining the University of Iowa elites of becoming a four time All-American (the first under Tom Brand’s tenure as head coach – and the 18th Hawkeye to hold such honor) North Dakota State University announced that the former Iowa City West prep will be joining Roger Kish’s staff as an assistant.
Who got you started in this wonderful sport?
“My dad introduced me into wrestling in the first grade.”
You have wrestled under quite a few Iowa greats, do you think they impacted your decision to coach?
“Yes, with having been around great wrestling for my whole life and learning from some of the best. I wanted to stay in the sport of wrestling and pass on my experiences and knowledge of the sport.”
What would you say would be the biggest thing you learned from Mark Reiland?
“To stay calm, relaxed and to just have fun. We both do those things naturally so it made to very easy to wrestle for Reiland.”
What would you say would be the biggest thing you learned from Brands?
“I would say it’s fight, not fist fighting, but no matter how bad you are getting your butt kicked/ beat you never stop fighting.”
Does Tony Ramos ever do his stare down at practice against you?
“We don’t typically wrestle and I am not so sure he does it in the practice room.”
There are ups and downs in college wrestling. What was your toughest loss and how did it make you a better wrestler?
“They are all tough and good wrestlers learn to make adjustments from one match to the next. Whether you are winning or loosing you are all ways making adjustments in your wrestling.”
You are known as a grinder. Have you ever been broken in the Iowa wrestling room and who was it?
“Everyone has been broken in that room at one point or another it’s part of the sport. It’s something that builds you as a wrestler and as a person. I am not so sure if I remember a time in particular but stepping in the room as a freshman wrestling guys like Brent Metcalf, Ryan Morningstar, Jay Borschel, Dan Dennis, Doug Schawb, etc. there were points where I struggled.”
Do you plan on continuing to compete in FS at all?
“Yes, I plan on competing next spring.”
Was there some reason in particular that sold you on the NDSU program?
“Roger Kish and Manny Rivera have a good thing going here at NDSU and I thought it would be a good fit. I felt it would be a great place to start my coaching career and there are some things that I could add to the program.”
What is one thing you bring to NDSU as a coach that no one else does?
“I think it would be a different mentally and mind set then they are accustomed too.”
Why did you decide to go into coaching?
“I felt that coaching would be a good fit and it’s something that I think I would enjoy.”
Thanks to Derek St. John for being a Hawkeye and wish you nothing but success in your college coaching career. Go follow Derek on twitter @TwitterlessDSJ. Tweet, share and like this page and maybe we can get DSJ to get a twitter account. Comments are encouraged below.