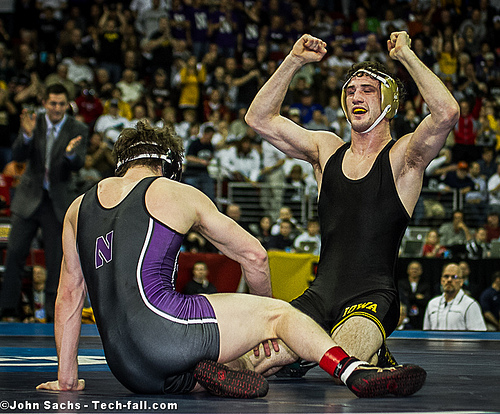 Just a few months after joining the University of Iowa elites of becoming a four time All-American (the first under Tom Brand’s tenure as head coach – and the 18th Hawkeye to hold such honor) North Dakota State University announced that the former Iowa City West prep will be joining Roger Kish’s staff as an assistant.

From the NDSU release : “I’m excited to join the North Dakota State wrestling program and to be a part of Coach Kish’s staff,” said St. John. “I look forward to building on the tradition and the success that have already been established here, and I know we will work hard to take it to the next level.”

St. John was going to join the Hawkeye Wrestling Club, but the opportunity to join the coaching ranks would be a tough one to turn down. This also has to bode well for recent commit Andrew Fogarty, who as the #36 recruit in the nation recently committed to the Bison. Projecting as a 165/174 wrestler in college, he will now have the opportunity to work with one of the great middle weights Iowa has produced in the last few years.

Props to Andy Hamilton on Tweeting the news :