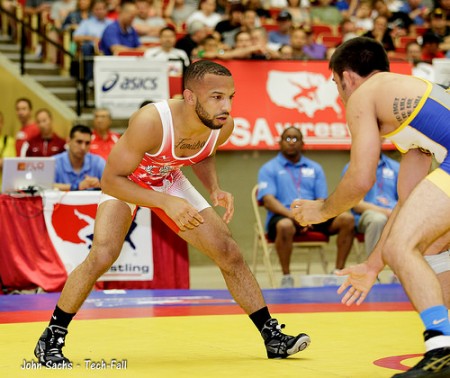 Kevin Jackson and the Cyclone Wrestling Club added one of USA’s best lightweights to the fold this past week, as Angel Escobedo announced his commitment. Escobedo is coming off a disappointing World Team Trials, which saw him exit in the consolation bracket due to injury.

Escobedo wrestled collegiality for Indiana University after winning four state titles for Griffith High School. While at Indiana Escobedo captured two Midland titles, three Big Ten conference titles, and a NCAA title. In 2010 Escobedo made the University Nationals team and finished second in the World Team Trials. In 2013 Escobedo wrestled for the U.S. National Team at 57 KG where he finished 5th at the World Championships.

It’s been a rough year so far for Escobedo as he looked to be one of the favorites to take home the 57 KG U.S. Open title, but in a quarterfinals match with Zach Sanders, Escobedo suffered a leg injury forcing him to default out of the tournament. Escobedo tried to mount a comeback to reclaim his spot on the National Team, but ran into the the buzzsaw Tony Ramos in the semifinals and dropped that match 2-0.

The addition of Escobedo comes at a great time for the Cyclones, as this week assistant coach Troy Nickerson announced that he was leaving for a head coaching position at the University of Northern Colorado. Along with Nickerson’s ability to recruit, he was the primary lightweight coach, so adding Escobedo as a lighter-weight work out partner helps soften the blow of Nickerson leaving. Adding another lightweight coach to the Cyclone Staff still would appear to be the ideal hire for Jackson, as Escobedo will be focused on his international career.