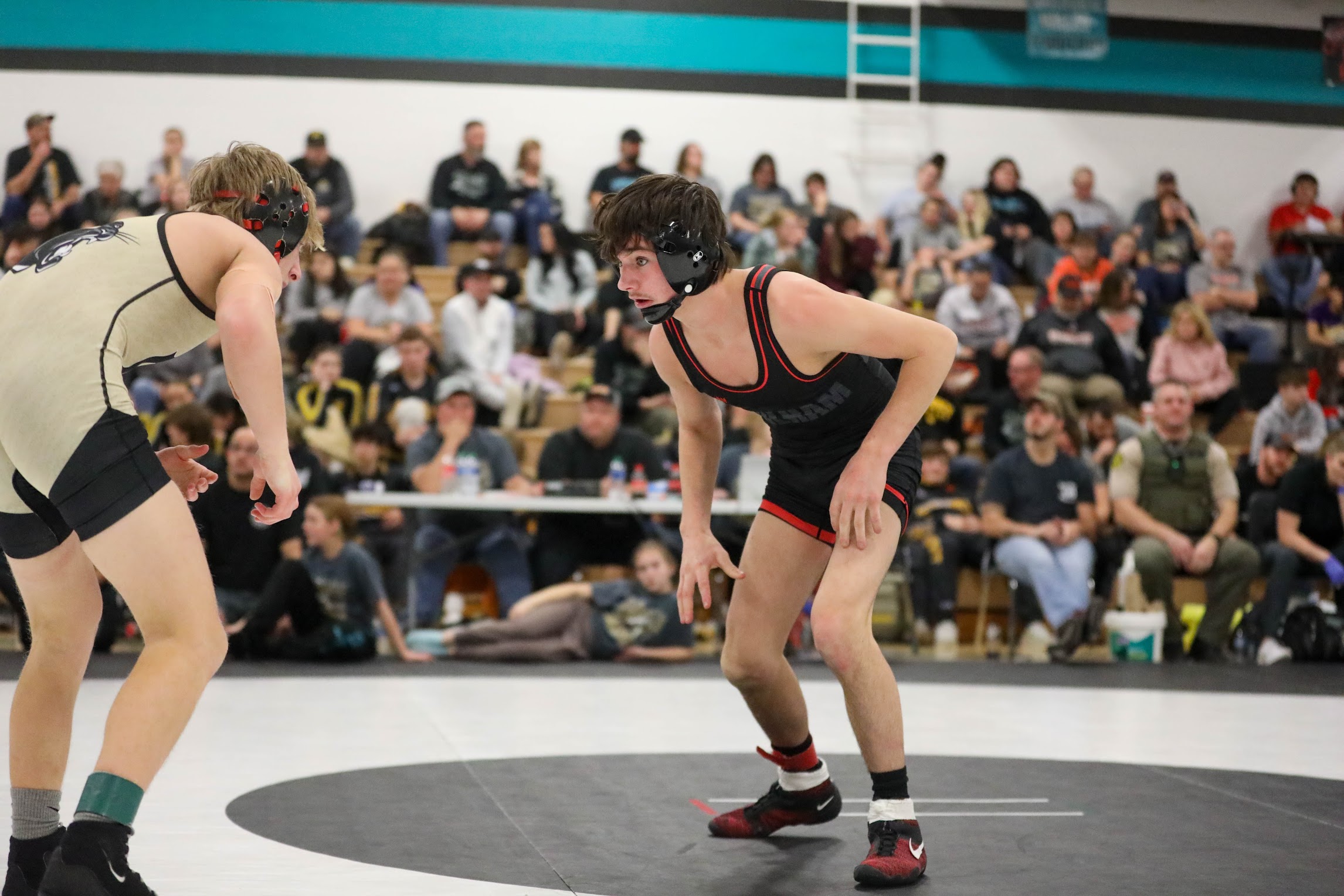 Jayden Rinken stays at #1 despite the loss to Hinz. Rinken has a strong resume with wins over 5 other ranked wrestlers. Shirk slides up to #2 after a win over Oldenkamp. Shirk’s only 1A losses are to Rinken. Hinz is still undefeated in 1A and even has a win over Rinken but a loss to an unranked 2A opponent in the finals of the Herb Irgens prevents him from moving up any higher. Bramman, Shaha, and Canoyer were all in the field at the John J. Harris and Bramman came out on top. He also had a victory over Canoyer the previous week. Sadler is still undefeated in 1A since coming back from injury, including a win over Delegardele who comes back into the rankings after a victory over Utterback. DeWitt falls out after a loss to Olsen of Iowa Valley. Eric Flores comes back into the rankings. He spent the beginning of the year at 113 but hasn’t lost since coming to 106.

Becerra took a loss up at 120 to Slaybaugh who he’s now 1-1 against. He was back down at 113 and won the John J. Harris. The next 4 all stayed the same as the only lossout of the bunch was Neighbor taking a loss to Ayala(3A). Lincoln Edwards comes out as he moved up to 120. Pollock is back and slots in at #6. He was ranked #8 before coming out due to inactivity. He has a victory over Maeder and common opponent over Etzel. Etzel did avenge his loss to Yoder(2A), but he also split with Luensman(2A) so he drops a little bit. He stays above Brase, who he got another win over though. Maeder moves up thanks to Munson and Swedin both taking losses to 2A opponents.

A lot of movement after the top 2 here. Paez and Slaybaugh both undefeated at 1A 120. Slaybaugh picked up a nice win over 1A 113 #1 Becerra. Brisker picked up a win over Helgeson so he moves above him. Smith comes down from 126 and wins the Herb Irgens last weekend. His only loss this season is to Brody Brisker at 126. Edwards comes up from 113 and slots in at #6. Walston drops after he took a loss to an unranked 2A opponent but stays undefeated in 1A. Larson debuts at #8 after a 3rd place finish at the Herb Irgens. His only 1A losses this year are Smith and Paez. He also has wins over previously ranked Munn and Krall since the last set of rankings. Borman and Guseman took losses to ranked 2A opponents. Stockenberger comes into the rankings after a win over Price. Krall took a pair of losses to Larson as well as a loss to a pair of 2A opponents.

Not a ton of changes as everything went pretty much to chalk. Rinken stayed undefeated and scored a victory over Reisz. Reisz bumped up to 132 and lost to Beaver. He falls a spot due to that. Munson moves to #2 as he’s still undefeated. Brisker took a loss to Reisz. Schmit lost to Brisker and Rinken. Harger slots in at #7 after coming up from 120. His only 1A losses this year are Reisz, Munson, and Slaybaugh. Friedrichs is still undefeated in 1A after a runner up finish at the Herb Irgens. Sachua took some out of state losses and a loss to Morrow who bumped up. Riley is undefeated since the last set of rankings. Michels lost to Munson. Nutt slides into the #12 spot. His lone 1A loss this year was at 132.

The top three are still undefeated in class 1A action. Valenzuela hasn’t lost since the last set. Dusenberry took a pair of losses to Arjes. Reed and Huck both lost to Koch(2A). Huck also took losses to Dusenberry and Arjes. Beaver took a pair of losses to Seuntjes so Suentjes comes back into the rankings. Beaver had a win over 126 #3 Reisz so he stays in the rankings. Brandenburg comes down from and slots in at #8. Stein and Cook are still undefeated in 1A but don’t have a signature win to move themselves any higher in the rankings.

Change here at the top as Bridgewater took out Neighbor. Bridgewater did take a loss to Harbaugh up at 145 but his resume at 138 is the strongest of the field so he’s the new #1. Allen stays put even after a loss to Robbins(2A). Holm still hasn’t lost to an in-state opponent. McMahon moves up to #4 as he’s undefeated in 1A and had victories over Boots and Veit since the last set of rankings came out. Boots’ win over Neighbor keeps him at #5. Hagen took a loss to Bridgewater. Meadows is still undefeated in Iowa. Knaack took a pair of unranked losses so he falls from #4 to #10. Trott comes into the rankings at #12. The returning state qualifier was active for the first time all season and has compiled a 7-1 record and bonused every in state opponent he’s had.

Mikey Baker comes down from 152 and is the new #1. He is the highest returning placer and has a similar resume to the rest of the top 7. None of them have wrestled each other and none of them have lost to anyone below them. They all have 1 or 2 losses to 2A opponents and have similar wins. Harbaugh took a few losses but also knocked off 138 #1 Bridgewater so he stays at #. Boyles comes out due to inactivity. Decker comes out as he moved up to 152. Wood took a loss to Harbaugh but moved up due to those above him losing. Koele and Nattress fall out after taking some unranked losses and White and Argo replace them. Radke comes back into the rankings after an impressive 2nd half so far. His only 1A losses are to Stortenbecker.

Kellen Smith cements himself as #1 with a pair of victories over Knaack. Klostermann, Prazak, and Brenden haven’t lost since the last set. Nelson just took 2nd at the Ed Winger, only losing to Tigner(3A). Munson comes down to 152 and takes a weird loss to a barely .500 wrestler but his resume is enough to slot him behind Brenden and Nelson who have the common opponent victory over him. Helton’s only 1A loss is still Brenden. Carolan came down from 60 and slots in at #8. Steinlage took a loss to Kinsella, who then moved down to 145 and just missed the top 12. Decker got a win over Gates so he slides above him. Irlbeck comes out due to inactivity.

Reisz and Lopez still seem to be on a collision course for each other as both are undefeated and destroying their competition. Broer defeated McGill so he moves above him. Kimball took a loss to Lopez but stays at #5. Peyton took a pair of losses so he falls a few spots. Huisenga and Milder both moves up because of that. McGeough comes into the rankings after a win over Peyton. Hansen took losses to Broer and Reisz but moves up due to others leaving the weight. McGill hasn’t lost since the last set. Thurn comes into the rankings at #12. He has a win over Peyton but an unranked loss keeps him from moving any higher.

Magayna is still #1 and undefeated against Iowa opponents. Clarahan jumps Nelson-Brown after Nelson-Brown took a pair of losses to 3A guys. Stiles took another loss to Street(2A) but also picked up a ranked win and avenged his loss to Armstrong(2A). Kohl comes back into the rankings after defeating Klostermann. He had a rough start to the season but since moving down to 170, Magayna is the only 1A wrestler to beat him. Thiry and Saul both took some losses so they fall to #11 and #12. They have strong enough resumes to stay in the rankings, but got jumped by Kohnen, Wilgenbusch, and Pugh. Lansing fell out after a few losses and is replaced by Evans who’s only 1A losses in the second half are to Magayna.

Bloker keeps the top spot but Hartz drops down from 195 and claims the #2 rankings. No one in the top 5 have wrestled each other yet and they just keep winning. Kelly took a loss to Kaden Shirk. Cowell took a loss to Hartz and Kuhlmann, who’s ranked at 195. Williams comes into the rankings after a major decision over Fernandez who fell out. Ballou and Waikel both came down from 195 as well and slot in at 8 and 12 respectively.

Big changes here as 25% of the ranked guys dropped to 182. Dewald and Glendening are still undefeated in 1A. Zuhl got a win over Blowe so jumps above him. With so much of the field leaving, Cox, Kuhlmann, and Tew slide up and into the top 12. Not much head to head here but Honnold did get a win over Tew and Green got a win over Cox.

Thiry still hasn’t lost in 1A. Knipp and Foreman each took a loss to top ranked 2A wrestlers. Ferguson beat Wright so he jumps him. Wright beat Davis so stays ahead of him. Hiland got wins over Smith and Lund who both were ranked last set but just fell out of the top 12. Wilkerson and Kessel went 1-1 after Kessel dropped down from HWT. Heitland and Hanna are undefeated since the last set. Roadcap debuts in the rankings at #12 after beating Lund at Kathman who ranked at 195.

No changes at the top. Fox and Smith are still undefeated. Smith picked up a victory over Ortner. Gregory took a loss to Ballard(2A) but stays at #4. Kessel moved down to 220. Goemaat took a pair of losses to unranked 2A and 3A opponents so he falls a few spots to #10. #5-#9 didn’t take any 1A losses since the last set of rankings. Jacobe debuts in the rankings after a runner-up finish at the John J. Harris. Jacobe is 1-2 on the year against Warner however Jacobe owns 2 common opponent wins over Warner.