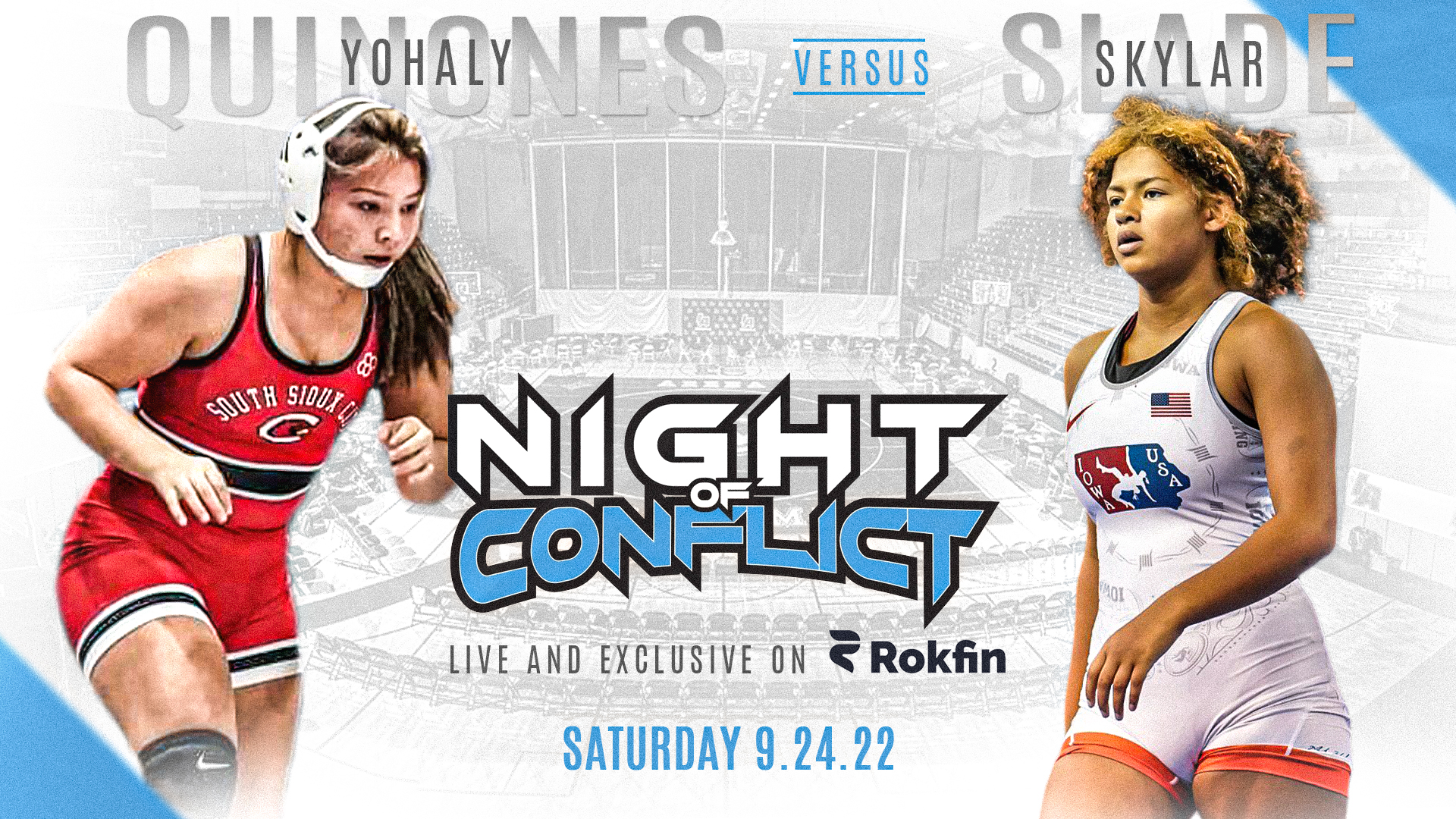 Yohaly Quinones is a senior at South Sioux City High School in Nebraska where she won a NSAA State Championship. Her high school coaches are Evan Bohnet and Jake Renken. She also is a member of the “Legends of Gold” Wrestling Club under Coach Terry PaK. She is a member of the Nebraska AAU National Team and competed at the National Scholastic Duals in Orlando, FL. Yohaly has been wrestling for five years and is tough in all positions but look to see her excel on her feet.  She would like to wrestle in college, she is looking for a program that is a good fit for her.

Skylar Slade will be a freshman at Southeast Polk under coach Dwayne Myer, but she already has a distinguished career. Just this past season Skylar has been a runner up at Fargo, Northern Plains Regional Champion, Iowa Freestyle State Champion, placed 3rd at Folk Style Nationals, won AAU State, and an AAU All American at the National Scholastic Duals. Skylar wrestles at Moen Wrestling Academy under Coach TJ Moen. She is a very dominate wrestler in all positions but feels her strength is in her top position. Skylar plans on wrestling in college and beyond. She dreams of a successful Senior Level career and Olympic aspirations.

Leah Chandler is a Junior at Chariton High School under Coach Jamie Cochran. She also in a member of the Chariton Wrestling Club. Leah was not able to compete at the IWCOA Girls State Tournament last season because of injury, but she did finish 3rd as a freshman. Leah has been on both Iowa AAU and Iowa USA Wrestling National Teams. Wrestling in both Orlando and Fargo.  Leah is a strong wrestler in all positions, but she has been very dominating in the neutral position. Leah is no stranger to IAwrestle events as this will be her second time wrestling in Night of Conflict. She plans to wrestle in college and right now the goal is to be a Hawkeye.

Destiny Krum is a sophomore at East Buchanan High School. She is coached by Dan Stifel. This past season she placed fourth at the IWCOA Girls State Wrestling Tournament. Destiny also competes for the Iowa AAU National Team. Destiny placed 2nd at the AAU Girls State Tournament She competed in both the Twin River Duals and the National Scholastic Duals. She is a very tough competitor in all positions, but she is a hammer in the top position.  Destiny would like to continue her wrestling career past high school.

Britney Rueb is a freshman at Scotland High School in South Dakota. Britney was a South Dakota High School State Champion (SD allows 8th grade athletes to compete at the High School Level). Her high School Coach at Scotland is Jim Kocer. She also is a member of “Legends of Gold” Wrestling Club and is coached by Terry Pack. Britney competes in all styles including Greco, she was either 1st or second at the South Dakota Triple Crown in each of the three styles. Britney has competed on SD AAU National Team at Twin River Duals. She would love to continue her wrestling career at the University of Iowa.

Sophia Shultz is a Junior at Raymond Central High School in Nebraska under Coach Harold Pester and Addison Kenning. As a freshman and sophomore her school did not have a girls’ team, so she had to compete 100% on the boy’s side. This past year she was one of eight girls in Nebraska History to qualify for the Nebraska State Tournament in the boy’s division. She was ranked as high as number ten in Class C against the boys and now holds the number one ranking on the girl’s side. She is a member of Georgi Ivanov and Ivan Delchev’s club “The Best Wrestler”. She also has had success with both NEUSA and Nebraska AAU as both Folkstyle and Freestyle Sate Champion. She does plan on wrestling in college but has not made a decision on where yet.