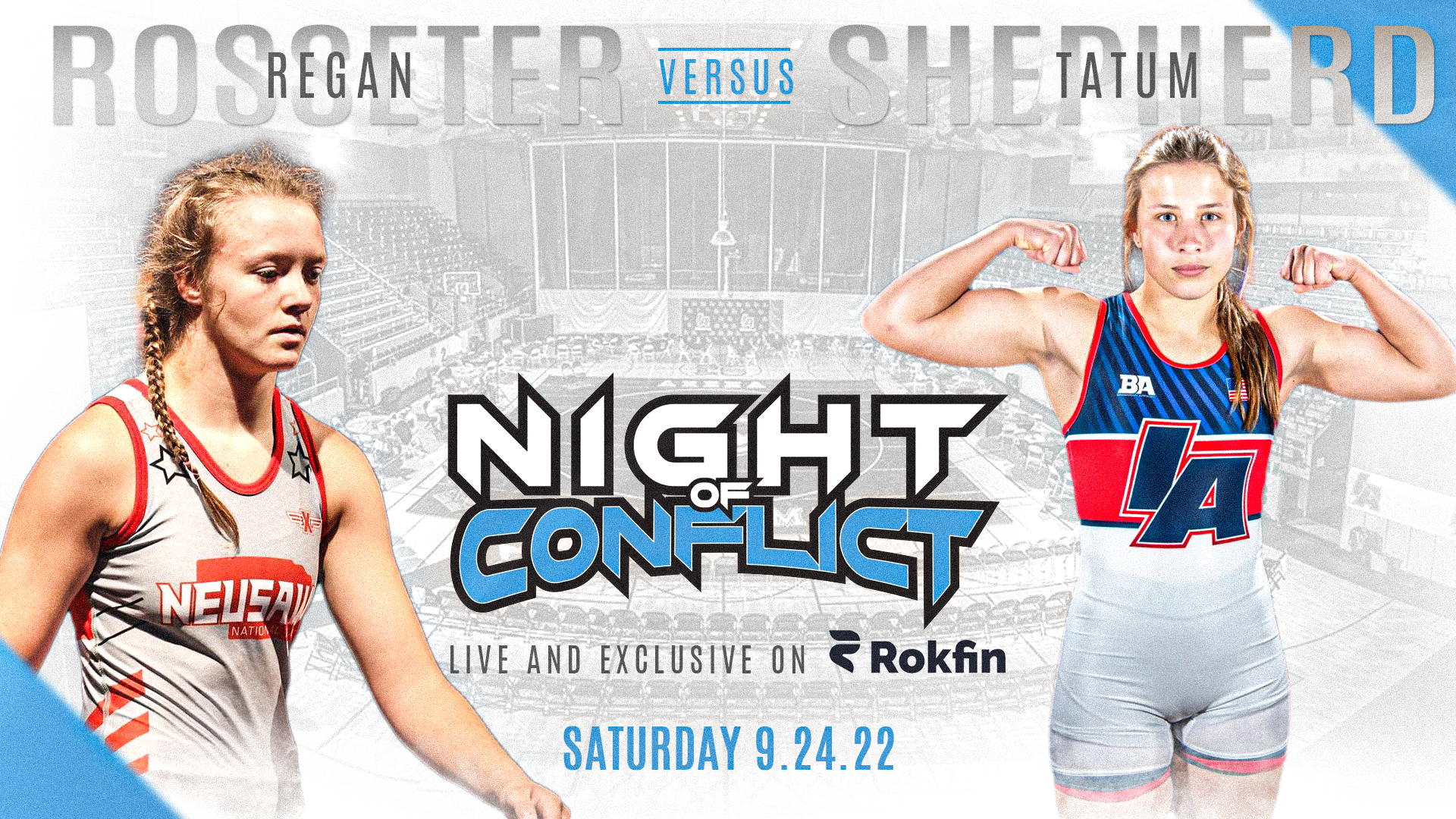 Regan Rosseter is a junior at Omaha Westside High School. She is Coached by Bob Mulligan. Last year she was a NSAA Girls State Champion. Regan is a member of the “Best Wrestler” Coach by Georgi Ivanov and Ivan Delchev. Regan was a Nebraska AAU State Champion. She is member of Nebraska USA Wrestling National Team. She placed at Fargo becoming a USA Wrestling All American. Regan is a solid wrestler in all positions. She would love to wrestle in college at the University of Nebraska, if they start a team.

Tatum Shepherd is a junior at Ridge View High School where she is coached by Troy Greder, Jason Shepherd, and new assistant coach Keagan King. Tatum is on track to being the first girl at Ridge View to have 100 high school wins. Last season she was a seventh-place finisher at the IWCOA Girls State Tournament. She also is a member of the BVWC at BVU under Coach Sean White. Tatum also competes on both AAU and USA Wrestling Dual Team Tournaments and has been an AAU State Place winner. Tatum is a wide-open wrestler and tough in all positions. She is undecided on wrestling on the next level.

Kendra Berglund is a sophomore at SGT Bluff High School and is coached by Clint Koedam. Being in the SBL room gives her great coaching and tradition. She finished in the blood round at the IWCOA Girls State Tournament and finished 2nd at the AAU State Tournament. Kendra is a solid wrestler in all positions but a hammer on top. She is involved in several extracurricular activities. She will definitely be attending college and if she finds the right opportunity, she will continue her wrestling Career. Currently she is ranked 8th in the preseason rankings.

Maycee Peacher is a Sophomore at Bennington High School where she wrestles for Alan and Craig Porkorny, Dan Parrish, and Josh Velasquez. Maycee is a NSAA State Champion. She also is a Nebraska AAU State Champion and a Nebraska USA Freestyle Champion. She attends “Powerhouse” Wrestling Club in Council Bluffs, IA under Coach Keith Massey. Maycee is a solid technician in all positions but loves to work from the top position. She would love to wrestle in college and aspires of wrestling for the University of Iowa.

Kiara Djoumessi is a junior at Wavery-Shell Rock High School. She is coached by Josh Meier and Alino Djoumessi. This past season she placed 5th at the IWCOA Girls State Tournament and was part of the State Championship Team. She is a member of the Immortal Athletics Wrestling Club and coached by Cruse Aarhus. She was very active in the off-season Placing 1st at 16U Freestyle State and 2nd in Juniors. She was a AAU Girls State Champion and part of the Iowa AAU National Team that competed at the National Scholastic Duals. Kiara achieved AAU All American Status at the Duals. Kiara is a very solid wrestler but excels in the neutral position. She would like to continue her education and wrestling career at the University of Iowa.

Moorea Brown is a senior at Center Point Urbana High School and is coached by Ferdie Astorga and Bruce Tweeten. Moorea placed third at the IWCOA Girls State Wrestling Tournament. She is also a member of the DC Elite Wrestling Club under coaches Dustin Coufal and Kal Alger. Moorea was on both the Twin River Duals and AAU Junior Olympic Dual Teams. This will be Moorea’s second appearance at Night of Conflict in Sioux City. Moorea has really worked on her strength training this past year and it has improved her wrestling in all positions. She does plan on continuing her wrestling career past high school but has not decided on where she will be attending.