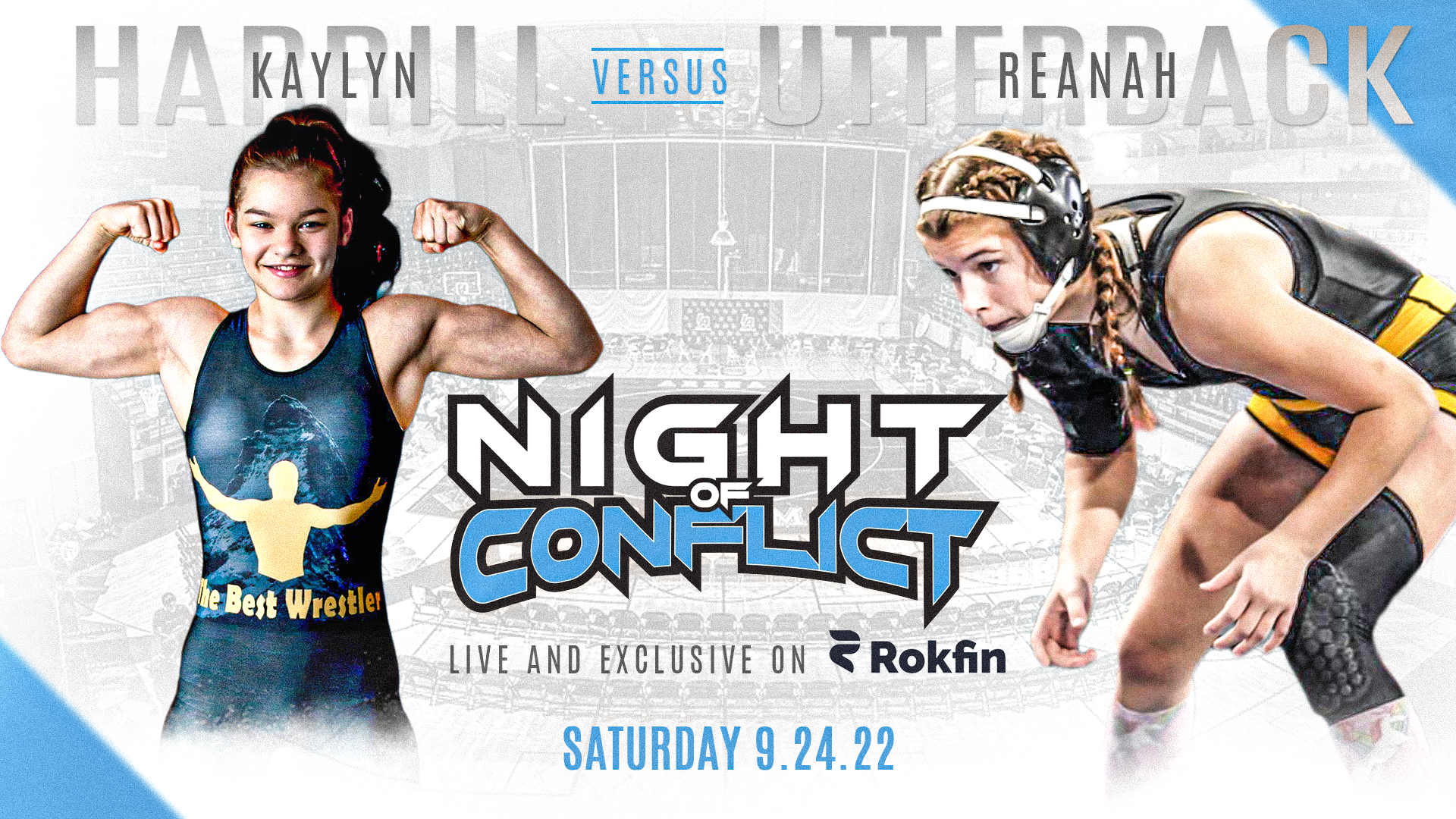 Reanah Utterback is a Sophomore at Sigourney High School and currently the No. 3 p4p top wrestler in the state in our girl’s FAB50 Rankings. She wrestles for Coach Ryan Vandenheuvel. Last season she was a State Qualifier for IHSAA Boy’s State Tournament and a State Champion at the IWCOA Girls State Championship. She goes to Sebolt Wrestling Academy with coaches TJ, Samantha, and Scott Sebolt. Reanah has been both an AAU and USA Wrestling State Champion and a member of both National Teams. This summer Reanah placed 5th at Fargo. Reanah is a very gifted wrestler and tough in all positions. She hopes to compete at a Power Five School and hopefully she will have more options to do so in the next two years.

Kaylyn Harrill is an 8th grader and attends St. Patrick’s Catholic School and will attend Wrestling Powerhouse Skutt Catholic in Omaha, NE. even though she is the youngest athlete competing in this year’s Night of Conflict, she is one of the most experienced. She has competed the with Team Nebraska at the National Scholastic Duals the past two years. She has also been the USAW 15u runner up in 2021 and 2022, USAW Preseason Nationals Middle School Champion, and Nebraska Freestyle and Folkstyle Wrestler of the year. Kaylyn wrestles for “The Best Wrestler” with coaches Georgi Ivanov and Ivan Delchev. She plans on continuing her wrestling career after high school in college.

Hannah Rogers is a Junior at Wilton High School for coaches Ben Burkle and Gabe Boorn. This past season Hannah was the IWCOA State Champion and returns the No. 1 ranked wrestler at 120 pounds. She is a member of Sebolt Women’s Wrestling Academy under coach Samantha Sebolt. Hannah is a solid wrestler in all positions but is particularly tough on top. In the “off” season she won a USA Wrestling State Title and was an AAU All American at Twin River Duals. Wrestling in college would be a dream for her and she would love to go to Oklahoma State University if they add Women’s Wrestling.

Adyson Lundquist will be coming back for her third Night of Conflict. Ady finished fifth as freshman, runner-up as a sophomore and third this past season at the IWCOA State Tournament for Southwest Valley. This upcoming season she will be wrestling for the coop team of SWAT Valkyries. Her high school coaches are Tiffany South and Matt Lundquist. She has found her way into Georgi Ivanov Ivanov and Ivan Delchev’s club “The Best Wrestler” for her club. Adyson has also been a member of both AAU and USA Iowa National Teams competing both in Orlando and Fargo. This summer she finished All-American status at Twin Rivers Nationals. You can expect a very skilled wrestler both on her feet and on the mat. She is planning on going to college for Exercise Science and Nutrition while continuing her wrestling career in college. She would love to give back and coach.