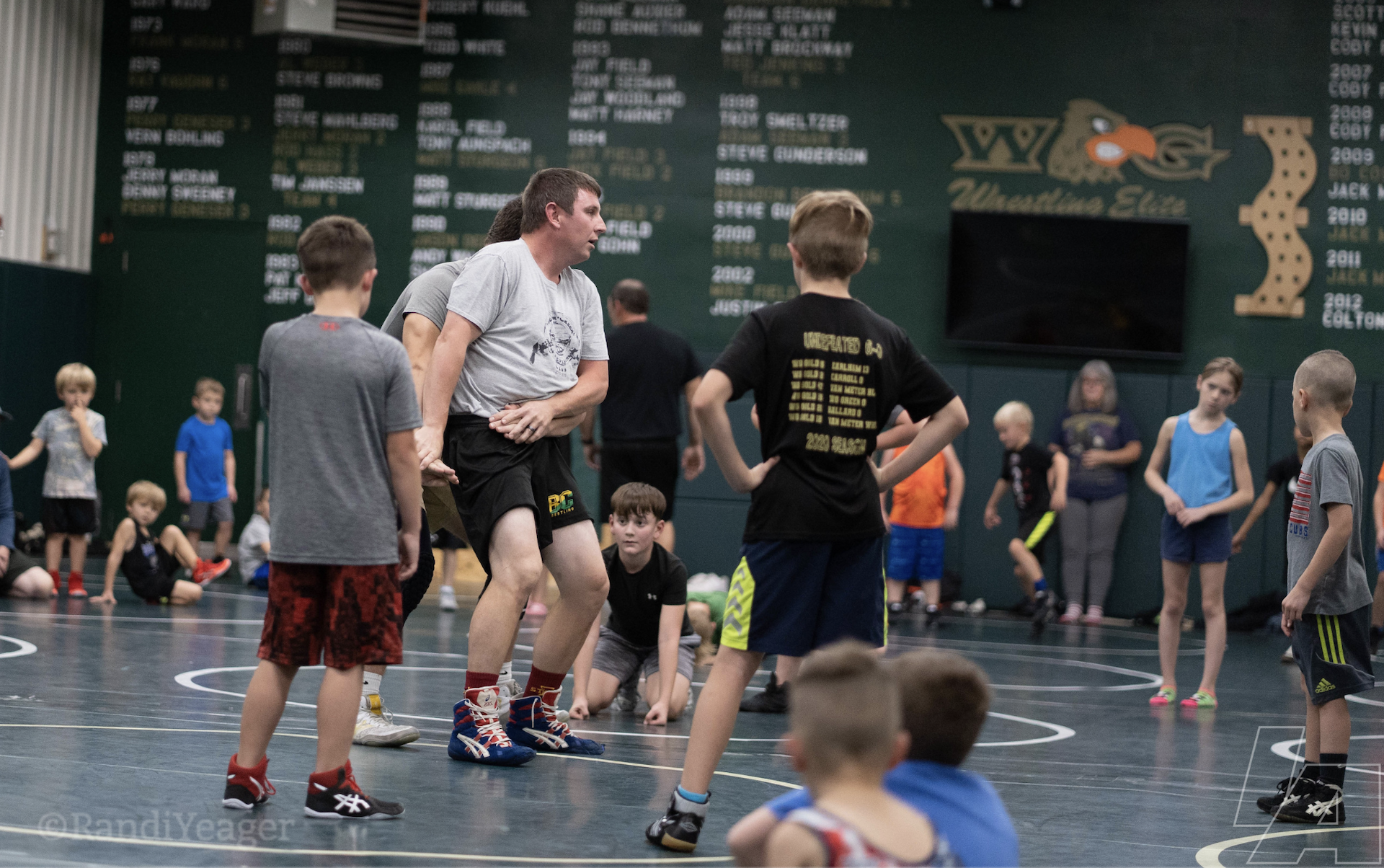 (Behind the Club Photos | Video)

Beaver Creek Wrestling Club sits in a Morton building just behind the Woodward Granger high school. Walking inside you’ll see the long hallway lined with wrestling bags, shoes and water bottles. At the end of the hallway you walk into the weight room the high school teams use and if you go into the door, you see a wrestling room full of kids excited to be with their friends and coaches volunteering their time to get the kids to fall in love with the sport of wrestling.

You can imagine the chaos that fills the room when you have as many kids in their club as they do. I was pretty impressed at the smooth transition when the younger, more novice wrestlers ended and the advanced group began. The younger kids left and the older kids were already there and ready to go, some starting to warm up with jump ropes while the younger group finished tug of war.

You get a wide range of kids through beaver creek, they’ve expanded two 4 nights a week of practice, two practice groups each night, and four different options for attending. B1, which they consider their beginner group, B2, which is the next step up and then advanced class, with the option of what they refer to as AAU practice on Wednesdays. They were also one of the first to offer girls only practice in the area. They have girls practices on Mondays and Wednesdays and have girls from the local area and all over the metro that come in to get better.

The coaches in this club pride themselves on the community that they’ve built and they should. Almost every kid I talked to from 4th grade to high school mentioned how supported they felt by their coaches and their communities. Less than $50 for the entire season and you can attend any of the practices and get a t-shirt. The coaches are at the tournaments coaching and truly love the kids they work with. They are making kids at all ages and levels fall in love with the sport of wrestling and there is nothing greater than that.

These local clubs need our support. They need us at their tournaments and to bring our kids in even when they’re maybe at more advanced clubs other nights. Our high school teams depend on our youth clubs to build the next generation of wrestlers and Beaver Creek is all in on making that happen for the local communities they serve.

Read further to find out more about the people making this happen and their goals for the club. You can find them in Woodward working to get better every week!

Tell us about your coaches:

Duane Harney, the founder of Beaver Creek Wrestling Club, Head coach from 1985-2012, also served as a Jr high coach, and as the Head coach for Woodward-Granger Jr High and Woodward-Granger High School from the years of 1991-2000. He was also a former ISU Wrestling club board President for two years. Duane received the Robert Roehler Award from the Iowa Wrestling Hall of Fame for his decades of dedication to the sport of wrestling in 2021.

Rick Sloss is currently the head coach and director of the Beaver Creek Wrestling club and has been since 2013. Rick wrestled for Perry High School and Ellsworth Community College. Rick began coaching with coach Harney in 2009, while spending three years learning from the best. In 2013 Beaver Creek had approximately 25 kids, as of November 2021 we have 160+ including 35 girls in our Beaver Creek Girls club. The girls club was founded in 2019! Coach Sloss currently runs the beginner groups of boys third grade and under, the pre-k and kindergarten group, and also the girls team. Coach Sloss doesn’t have a child involved in wrestling.

Quintin Moreno, Coach Q attended Glenwood High School where he was a 3-time Iowa High School place winner. He went on to attend North Idaho College and Dana College. Coach Q came on board in 2017 when the opportunity to take over the advanced group opened up. Quintin is currently the head coach of the advanced section of Beaver Creek and also helps with the Girls Club. Since his arrival every single aspect of Beaver Creek has improved. Coach Q currently has an 8th grade son, and a first grade daughter involved in Beaver Creek.

Tom Atkinson, Tom wrestled for Northeast Goose Lake in high school, then took his talents to Central College in Pella during his college years. While there Tom was the team captain for the 2002-2003 season. Tom began his journey with Beaver Creek in 2013. He has coached with us at every single level as his son moved through the ranks, he is absolutely the do anything coach. Here very soon, Tom will begin the journey over again as he has a very young son at home. Tom has a “lifetime” commitment to Beaver Creek. Tom currently has a seventh grade son wrestling.

Matt Brown, Matt grew up in Boone, Iowa and wrestled for the high school team. Matt began coaching with us in the 2017 season and has been an absolute asset to all groups! Matt is the Co-Head coach to the third grade and under wrestlers, and our Super Pee Wee group. Matt brings with him his amazing wife Melinda who handles the admin responsibilities for the club! Matt has 2 boys, Liam fourth grade, and Cooper in kindergarten.

Dr. Quentin Danner, Coach Danner was a 4 time Nebraska State qualifier finishing fifth, second, and fourth. He also helped his team to multiple top 10 finishes at the state tournament. After his days at Syracuse High School, he moved onto wrestling in college at Morningside College. Dr. Danner ended up at Cleveland Chiropractic College, and has since opened Revive Chiropractic in Grimes, Iowa with his wife Dr. Brea Danner. Coach Danner is the Head Coach for our AAU

practice while also helping with our advanced practices and leads the spring/summer Freco groups. Dr Danner began his coaching career with us in 2019 and made an impact since day one! Danner has one young daughter, and no children in the club.

Megan Kaszinski, Coach Kaszinski is the co-head coach of the Beaver Creek Girls Club. Megan is a member of the Iowa National Guard. She began coaching with us in the 2020 season and is a very important part of our girls program. Megan has 2 children in Beaver Creek, Owen 4 th Grade, and Kelsey third grade.

What are your goals for the club?

“I personally have a couple goals as a public club coach, and they are simple. My job is to get kids to fall in love with the sport of wrestling, while retaining them at the high school level. I also want to make wrestling as cheap as possible, money can and is a factor in every sport in today’s society, not at Beaver Creek. No kid should miss out on the sport of wrestling because of money! For those that we don’t retain, their time in wrestling will make them a better person in life, because once you have wrestled everything else in life is a little easier.”

What is the biggest challenge you face in youth wrestling right now?

“Challenges, that’s a tough one. Finding time and space for the kids. Keeping kids wrestling with their teammates and school friends. As a public club we have to deal with the draw of private clubs. I understand chasing practice partners, and the draw of the big name coach. Central Iowa is full of amazing private clubs, with amazing coaching staffs. To build a great public club, we need the amazing kids to guide the good kids, good kids to push the average, and the average to help the beginners. If the school based public clubs die out, wrestling will too. As a wrestling community we need to understand that. Absolutely join a private club, the more coaches the better, but still come “home” and work with your classmates and what will be your future teammates at the high school level, wrestling needs that bond, the bond of wrestling with the same group of athletes pre-K – 12th grade is powerful.”