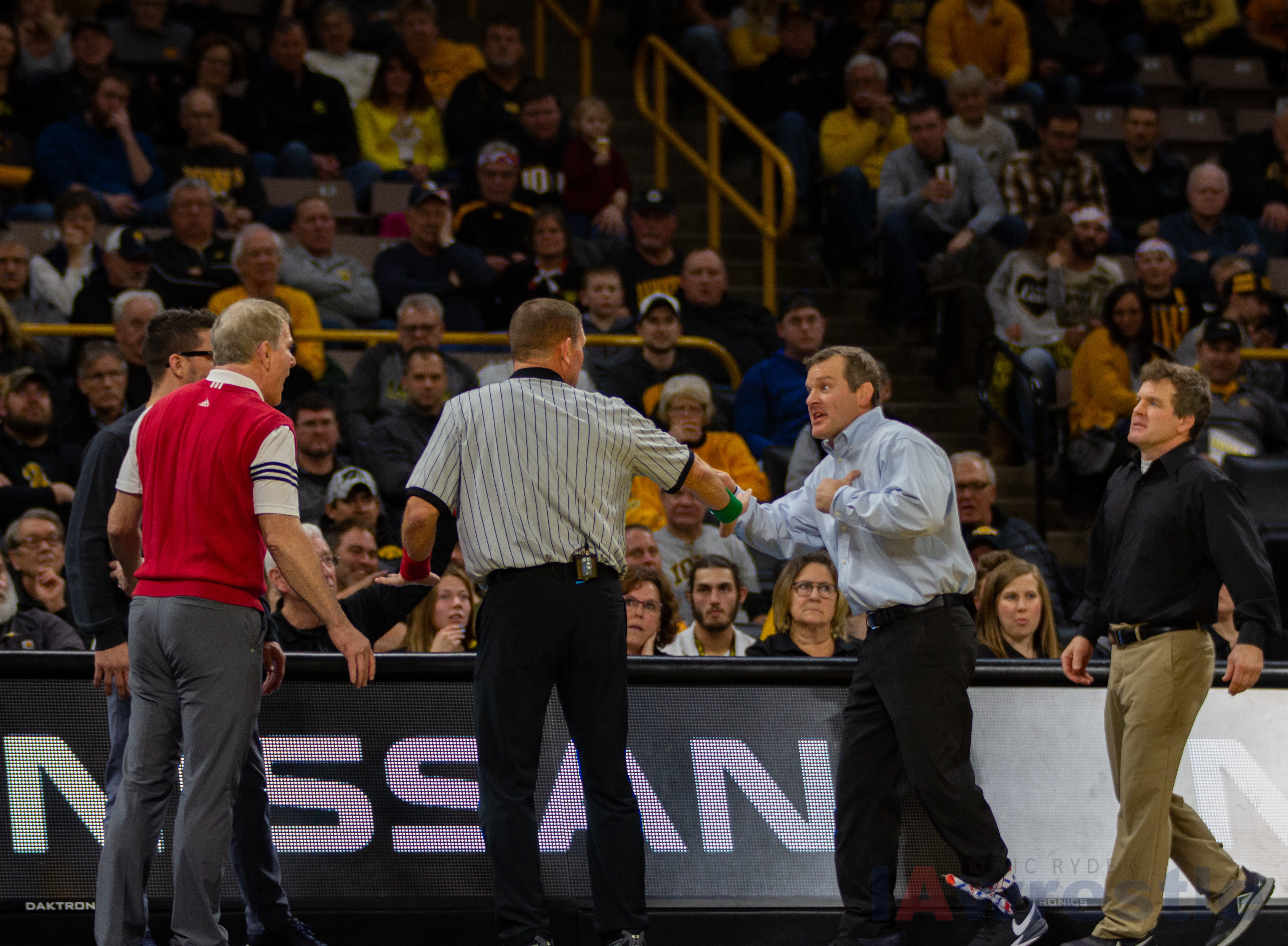 Iowa vs Nebraska is scheduled to get underway tonight at 8:00 PM CT

1st: Spencer in on a shot off the whistle gets the finish for a takedown as they go Out of bounds (OOB). Off the restart Lee gets a four point turn and Cronin fights off his back. On his second turn Lee gets the fall.

1st: DeSanto drops in on the leg and finishes take a takedown. Puts the boots in and flattens Thomsen out but after not being able to turn he releases. DeSanto gets right back in on the attack for a second takedown. Under :30 to go and DeSanto cuts and gets his third takedown in the period. 6-2 lead. Thomsen also warned for stalling.

1st: Red fights through the hands and gets a straight on double leg that he finishes for a takedown and runs out of bounds. Off the restart Eierman is out. Red in on an ankle again, Eierman looking to grab the ankle and fight off the shot. Stalemate. Eierman controlling the center but not able to find his offense. Period ends. 2-1 Red.

2nd: Eierman starts on bottom gets to his feet. Fights through the hands for an escape to tie. Eierman tries to change levels, Red fights it hard for a stalemate while Eierman looking for a go behind. Red in on another shot, Eierman gets a cradle locked up but Red rolls through after two nearfall and create a stalemate. Off the restart Red is out on his feet. Eierman on a single brings it all the way to shoulder but can’t finish at the buzzer. 6-3 Eierman.

3rd: Red out for an escape to start the period. Red takes a shot and hanging on to the ankle, Eierman is just about behind but can’t get his leg free. Now Eierman breaks the grip and has a takedown. Red warned for stalling late.

1st: Murin gets a takedown to open the match and Hardy is out quick. Lots of head-to-head, ear-to-ear wrestling after that. 2-1 Murin.

2nd: Hardy starts down and is out. Murin on a single on the edge but they go out. Both guys working for neutral but they can’t get much going. Period ends 2-2.

3rd: Murin starts underneath. He scrambles out to go up 3-2. Murin with some head movement and drops to the leg. Looking to come out the back door and is stalemated. Hardy looking to lock up in the body but bails out, Murin stays locked on and finishes for a takedown. Hardy warned for stalling. Hardy tries a roll but Murin is ready for it and finishes the ride.

1st: Young gets in on a single, brings it to his feet and trips for a score as they go out of bounds. Off the restart Licking up to his feet and mat return Young. Licking up again and is out. Another takedown for Young just under a minute to go. Licking gets out with just over :30 to go. 4-2 Young lead.

2nd: Young starts on bottom and Licking not only gives up the reversal but gives up four nearfall. Very luck to not be pinned. Young gives the escape to go to their feet. Shot by Licking and Young gets a cradle, Licking breaks the cradle but Young comes around for takedown, gets a turn for 2 nearfall. 12-3 Young.

3rd: Young underneath again, Young able to get out and reverses again. Licking gets the escape. Young shoots in head inside single. Stalemated. Young stuffs the head and gets a go behind takedown. Lets Licking up and looking for a score with under :25.

1st: Robb drops in on a leg and manages to bring it up to his feet, he pops his head and tries to finish on the edge. Refs look at it….no takedown is the call. Blood time on Robb. Marinelli drops down has the ankle, Robb slips out, Robb takes a bit of a sloppy shot but Marinelli counters to score a takedown and lead 2-0. The go out of bounds and off a restart Robb with a Granby to escape. 2-1.

2nd: Bull starts down and is out. Robb tries to shoot, but Marinelli fends it off easily. Marinelli drops in on a shot, catches the ankle and brings it to his feet and ultimately finishes for a score. Robb hits another roll and is out. Period ends 5-2.

3rd: Robb starts down, Marinelli had over 1 min RT to start the period. Robb gets out after about :25. Marinelli comes with another shot, looks like he catches an ankle, but Robb slips out. Robb warned for stalling. Marinelli backs Robb out and gets a stall call. Robb shoots off the whistle. Marinelli kicks his leg backs for the counter. Marinelli lowers levels and scores a takedown.

1st: Labriola drops in on a leg and finishes for a takedown. Kennedy fights out for an escape. Both guys working but no change in score. 2-1 Labriola.

2nd: Labriola starts down, up to his feet and has the escape. Labriola controlling the center, Kennedy takes a shot, trying to come out the back door, Labriola hanging tight, both scrambling and Labriola gets a takedown but Kennedy but its an immediate escape. 5-2 Labriola.

3rd: Kennedy starts on bottom works out for an escape. Kennedy with another shot. Has the ankles, but Labriola drapes over top and trying to force a stalemate. Kennedy turns into Labriola and the Husker finishes for a takedown. Kennedy out quick.

2nd: Venz starts down, breaks the hands and is out. Venz comes in with another shot and Brands counters again for his third takedown. Brands finishes the rideout and has just under 2min RT.

3rd: Brands goes underneath, Venz throws a leg but Brands goes switch to get a reversal. Venz gets to his feet for an escape. Brands drops in on a leg, head inside. Potentially dangerous. Brands in on another attack and he scores a takedown. Venz is out and Brands with another takedown.

1st: Scoreless first between the two.

2nd: Schultz starts down and gets the escape. Lots of head-to-head wrestling….1-0 Schultz.

3rd: Warner starts on bottom and is out to tie. Schultz takes a shot, gets extended and Warner looks in good position, now Warner is extended and Schultz breaks the grip for a takedown. Warner gets a late escape.

1st: Cassioppi able to get to a single and brings it up above his head for a trip finish and takedown. 2-0 Cassioppi.

3rd: RT officially locked after a super fast escape for Cassioppi. Lance drops in on the ankle, Cassioppi limps out.