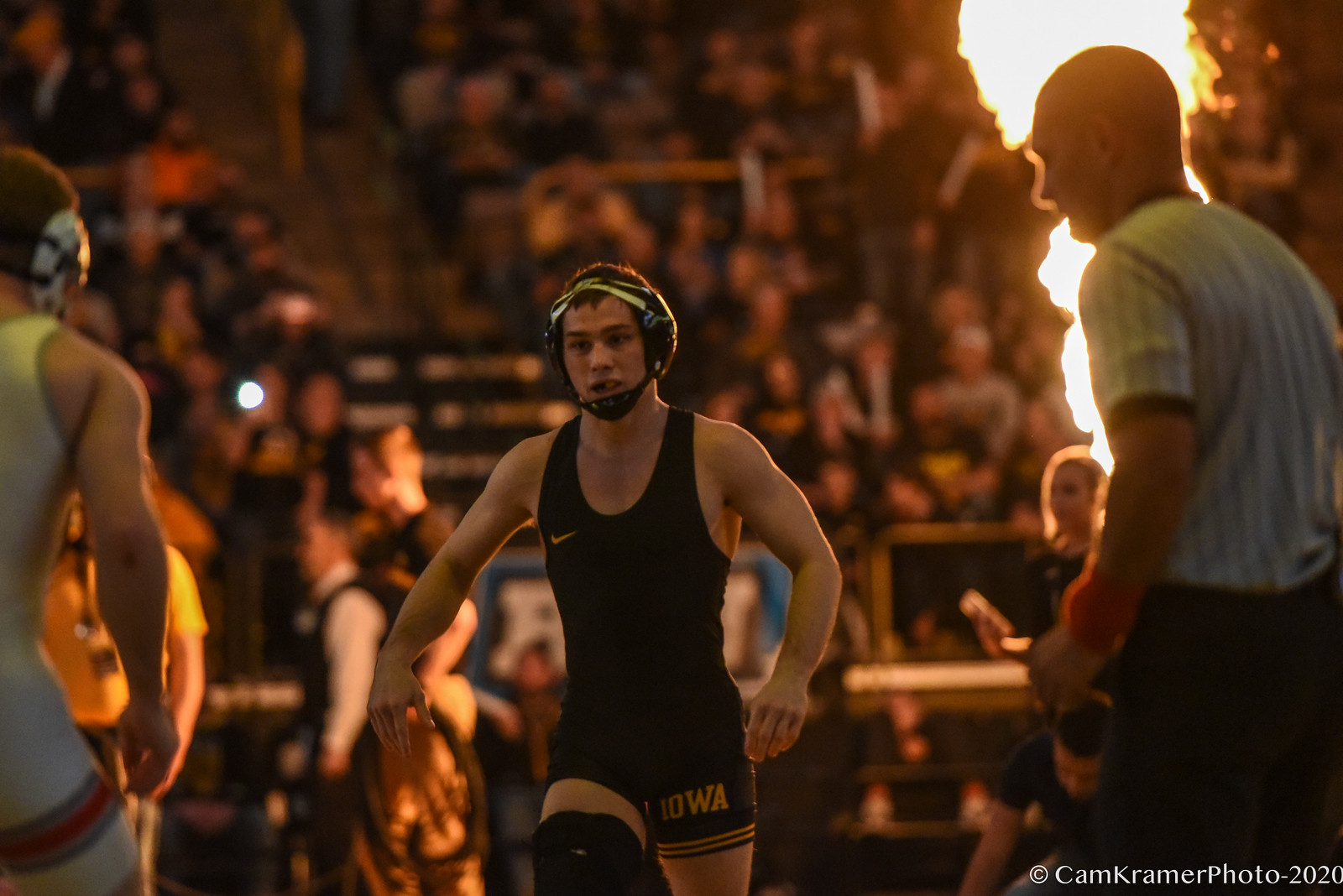 Are you going to try to do it again next year?

SPENCER LEE: Sure. How many multiple timers are there? Three?

SPENCER LEE: Four. My bad. My history is wrong.

Can you match Tom Brand’s passion? Talk about what the past 300 days was like, what the days were like.

SPENCER LEE: It’s been hard. As a team, we’ve come together. We know this is a big year for us. Like he keeps saying, unfinished business. We have guys that have chips on their shoulders. We had a great season last year. As you all know, the NCAA tournament is the pinnacle of wrestling. You don’t really feel like your season is finished unless you win that. I’m not going to say I didn’t deserve the Hodge Trophy, but I’m also the only one that won the Hodge that didn’t win a national title. Think about that, right? I mean, I’m hoping to win it next year, win the national title, earn it this time in my mind. Not to say I didn’t deserve it or whatnot. But in my head, it’s iffy because I might be the last one in Dan Hodge’s name. Wish I could have won it next year and shook his hand. Maybe he might have broken my hand. He’s pretty strong, right? He plays a big part in my life, too. We have pictures of me when I was, like, eight years old, Tulsa tournaments, Kickoff Classic, stuff. Really wish I could have seen him again. He signed a Sports Illustrated for me probably like four months ago, so that was really cool. Yeah, we’re excited this year. We’re getting ready and are going to put on a show. Be ready for it.

How are you going to balance your personal goals with the Iowa Hawkeyes with that of your country?

SPENCER LEE: Nothing changes. What’s next is the biggest thing. What’s next for me right now is we got Nebraska on the 15th. That’s what’s next. I’m going to do my best every time out, just like my teammates. Ultimately my goal is to be Olympic champion. I have to win a lot of matches before that is even possible. Then NCAAs, Olympic trials. If I win Olympic trials, in August Olympics in Tokyo. That’s one by one. You can’t skip, can’t take the easy way out. Got to take it the nice, easy, hard way, work your butt off, go out and put on a show.

Growing up, was this something you envisioned for yourself, winning this trophy? How excited are you doing it wearing masks?

SPENCER LEE: I mean, I never really thought about winning the Hodge Trophy. I pretty much only cared about winning four national titles. I knew it was a possibility to win in my freshman year. I think I had two techs, two pins. I won 5-0 in the finals, or 5-1 actually. I was pretty close to getting the OW that year as a true freshman. I knew it was a possibility, but I had losses in my record though, so I wasn’t able to be up for the Hodge Trophy. I had two losses that year. Have to go undefeated. Pretty hard to do. Got to be at your best each time out. Yeah, I mean, I saw I was able to do it. It was an honor just to be nominated. I’m humbled to have won.

You wrestled a long time. When did you first realize what the Hodge Trophy was all about? Who are some of those winners you might have emulated growing up?

SPENCER LEE: Obviously, Cael Sanderson. Did he win it three times? Crazy, man. He probably could have won it four, too, to be honest, which would have been — anybody else would have never ever done that. Him and obviously Dan Gable, Ironside, the other Hawkeyes that have won it. They’re idols to me. Just the way they wrestled, they were physical, ripped people off the mat. That Iowa style that Gable instilled into his athletes and stuff.

I mean, I don’t really wrestle like that. I like to put a lot of points on the board. I do it a different way.

Four national titles. Looked for a period of time like that wasn’t going to be possible. It’s old news now. What was your feeling when you found out you were going to have that opportunity?

SPENCER LEE: I mean, I wasn’t worried too bad because I believe in our administration. Whatever it would have taken, I know they would have done everything they could to have gotten me another year. I had two, maybe three redshirts I could have possibly taken. To lose a year having Olympic redshirt, normal redshirt, whatnot, would have been pretty hard on me just because other guys took Olympic redshirts, and I chose to compete for the University of Iowa. I wanted to win a national title. I promised President Bruce Herrald that I’d win him one. I know he’s retiring soon. Hopefully, he doesn’t retire before March 20th so I can adhere to that promise that I made as a freshman, so… I mean, I’m excited. I’m just glad I got this year. Next year we’ll worry about when that time comes, right?

Were you ever concerned how wrestling would have fit into the COVID thing? Were you ever afraid this was going to be canceled at all?

SPENCER LEE: I was just focused on myself, getting ready for the season. We were ready for the season in June. If they said, Hey, national tournament is whenever, August, get ready, we would have been ready. We’re just focusing on ourselves, listening to protocol. They know what’s best. The University of Iowa has our best interests at heart. We’re listening to them. Right now, we’re getting testing. We’ll be ready to go. I had no doubt in my mind they would do whatever is best for us. Had we not competed, that’s what would have been best for us and we would have trusted them.

Last season you had really good chemistry. How has that improved since March dealing with this together?

SPENCER LEE: Yeah, I mean, we’re like in a bubble, right? I wouldn’t say we’re closer because I don’t know how you get much closer than our team is now. We had to be around each other more because you can’t really go out and do anything. You’ve got to be smart. You’ve got to be prepared to take those I wouldn’t say risks, but it’s hard to not put yourself out there. We’re pretty much going from home to practice back home. Only time we really go out is if we want to go out to eat. Then we’re together. We’re still together. We know that’s what’s best for us because we don’t want to take any risks to hurt our teammates. We’re a family, so one person runs out, it’s not like he’s outcasted, right? He affects everyone. Everyone knows their place and their part. That’s to do the best they can, work as hard as they can to make sure they stay healthy, keep everyone healthy.

All Big Ten schedule, what does that mean for this team?