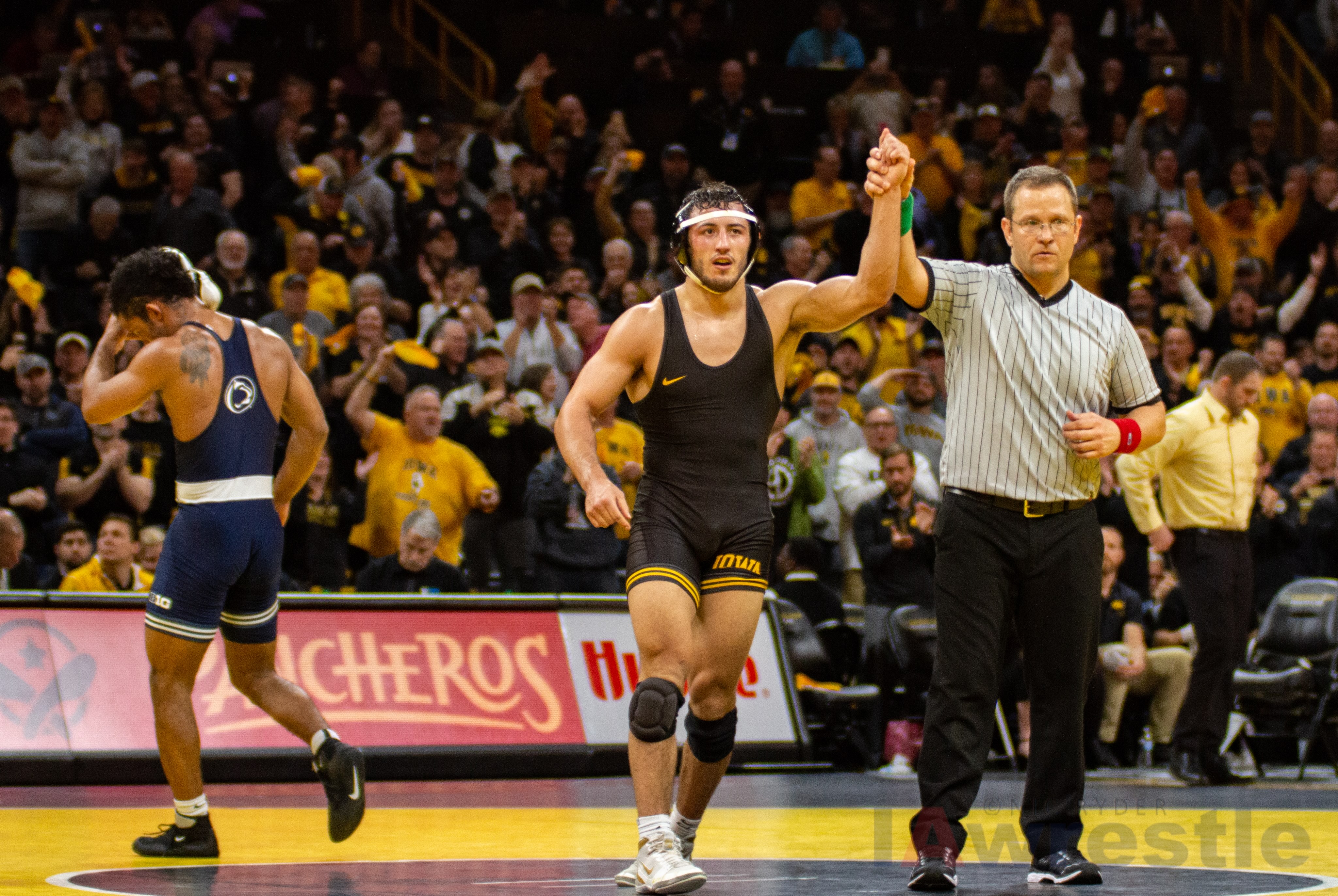 The Iowa Hawkeyes continued their lead at the 2020 NCAA championships thanks in part to a historic feat of having all ten of their wrestlers in a position to finish the tournament on the podium. It’s an accomplishment that has only been achieved by one other team (Minnesota) and with that the Hawkeyes now lead Penn State 114 to 89 for the top spot with NC State, Ohio State, and Wisconsin trailing a good distance behind those two squads.

Both Iowa State and Northern Iowa still sit in the top 20, with the Cyclones currently in 12th and the Panthers in 16th heading into tomorrow’s medal rounds.

Three members of the Iowa wrestling squad will advance to tomorrow night’s finals with Spencer Lee booking his third straight finals while Pat Lugo and Michael Kemerer will each be making their first appearance. Lee will take on NC State’s Jakob Camocho, who is one of the tournament Cinderella’s reaching the finals as the #10 seed. Lugo will have North Carolina’s Austin O’Connor in what will be a rematch of the 2019 Midlands finals. Finally, Kemerer will look to recapture the magic from the dual season when he faces Penn State’s Mark Hall, who he is now 1-1 against.

Of note Lee’s semifinal win extends a now 31 year streak where the Hawkeyes have had a NCAA finalist.

The three Hawkeyes coming out on the other side of their semifinals matches with a loss were Austin DeSanto, Jacob Warner, and Tony Cassioppi who will now be in a position to battle back to win third place. All three will compete in the consolation semifinals, assuring them a top six finish. DeSanto will face Penn State’s #5 Roman Bravo-Young, Warner will face #2 Noah Adams of West Virginia, and Cassioppi will take on #5 Matt Stencel.

Iowa also did some work on the backside as four of their wrestlers managed punch through to cap off the achievement where all ten of their wrestlers will end as All-Americans. Winning their Bloodround matches were Max Murin, Kaleb Young, Alex Marinelli, and Abe Assad who are all now guaranteed a top eight finish.

Of that group Marinelli was the only wrestler to win two matches on the evening, advancing him to the consolation semifinals where he will take on Stanford’s Shane Griffith. Marinelli can no longer place lower than sixth.

The trio of Murin, Young, and Assad all dropped their second bouts of the evening and will wrestle for seventh. Murin will face Virginia Tech’s Mitch Moore, Young will take on Oklahoma State’s Wyatt Sheets, and Assad will face Michigan State’s Cam Caffey for the second time this weekend.

It was a bit of a rough round on the front side of the bracket on Friday for the Cyclones with freshman David Carr going down to former NCAA finalist Hayden Hidlay in the semifinals. He along with junior Sammy Colbray will compete tomorrow morning in the consolation semifinals. Carr will take on Rider’s Jesse Dellacecchia, while Colbray will face instate rival Bryce Steiert.

With four wrestlers going in the Bloodround things were looking promising for Kevin Dresser’s squad but the team started the evening session 0-4 prior to Colbray’s victory. Ian Parker, Jarrett Degen, and Marcus Coleman will all end the tournament one win away from the podium.

Panthers will finish with two All-Americans

Following their surge in the morning session the Panthers took a few hits on the evening as both of their semifinalists will head to the consolation bracket to battle back for third. Returning All-American Bryce Steiert fell to the tournament’s top seed, Mark Hall of Penn State and will now have Iowa State’s Sammy Colbray.

Senior Taylor Lujan was not able to make it two straight years with a UNI finalist at 184 pounds as he was defeated by Trent Hidlay of NC State. Up next he will have Virginia Tech’s Hunter Bolen.

The other Panther competing this evening was Max Thomsen, who was downed by Minnesota’s Brayton Lee to end his bid of becoming a two-time All-American.