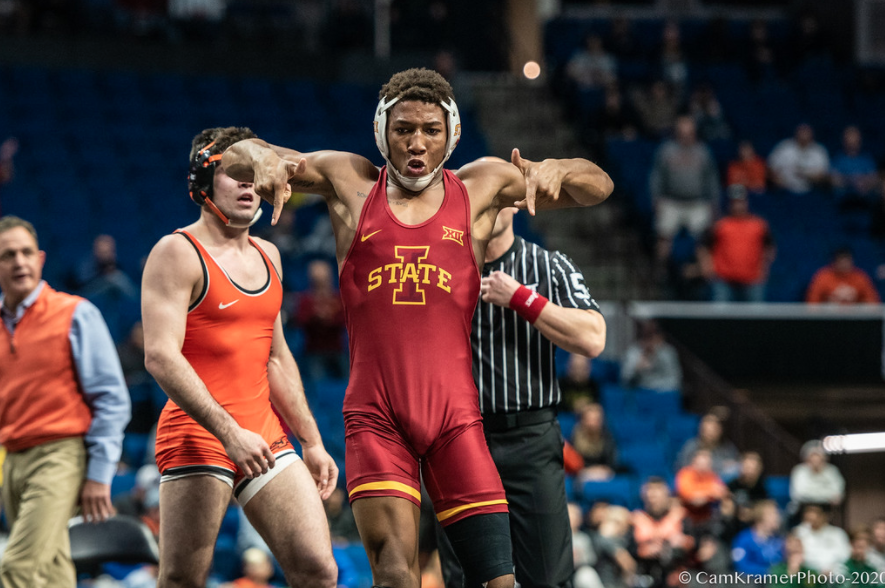 The Iowa Hawkeyes continue their perfect season with a strong performance in Session II of the 2020 NCAA tournament. Tom Brands saw all ten of his wrestlers pick up their second straight victories which will give his squad ten wrestlers in tomorrow’s quarterfinals. The wins extended the Hawks lead over Penn State to seven points as the top two teams have 30 and 23 points respectively. The Cowboys of Oklahoma State still sit in third place followed by Ohio State and Nebraska.

Kicking off the string of Hawkeye wins was Spencer Lee, who will take on Big Ten opponent #8 Michael DeAugistine of Northwestern tomorrow.

Austin DeSanto will go into the quarterfinals as an underdog as has #3 Chas Tucker of Cornell, who is the weight’s only undefeated wrestler.

In the season rubber match, it was Max Murin who came out victorious over Minnesota’s Mitch McKee to make quarters for the second straight year. He will face #2 Nick Lee of Penn State tomorrow.

At 149 Pat Lugo rolled into the quarters with a win over former Iowa State wrestler Colston DiBlasi, who is now at George Mason. Tomorrow he will take on #8 Jarrett Degen of Iowa State.

Heading back to the quarterfinals is junior Kaleb Young who will have #1 Ryan Deakin of Northwestern next. Last season Young really hit his stride and knocked off Deakin twice at the NCAA tournament. Mirroring 2019 these two also met in last year’s quarters.

Alex Marinelli rolled in his match and will face Wisconsin’s #8 Evan Wick. Since taking a loss to Wick as freshman Marinelli has rebounded to own the series against his Badger opponent winning all of the past meetings spanning last year and the current season.

Second seeded Michael Kemerer will have #7 Devin Skatzka of Minnesota following his second round win.

It was the third time was the charm for Iowa freshman Abe Assad, who managed to narrowly defeat Michigan State’s Cam Caffey to reach the quarterfinals. His opponent will be Big Ten champion #3 Aaron Brooks of Penn State.

Jacob Warner defeated Penn State’s Shakur Rasheed at 197 pounds and will have #4 Ben Darmstadt of Cornell in the next round.

And capping off the Hawks’ 20-0 start was freshman Tony Cassioppi was dominant over Ohio State’s Gary Traub to reach quarterfinals. He will take on #6 Trent Hillger of Wisconsin, who he already holds two victories over this season.

Cyclones with three in the Quarters

There is some optimism for Kevin Dresser’s team as they concluded their first day at the tournament with eight of their nine qualifiers still alive, and three of those wrestlers competing in tomorrow’s quarterfinals. Even more positvie news is all three Cyclone quarterfinalists are favored in their next match, which gives the team an excellent shot at landing multiple wrestlers on the podium for the second straight season. The team currently sits in sixth place, which is one spot higher than where they closed their first session.

At 141 Ian Parker advanced over Northern Iowa’s Michael Blockus and will now have a Big 12 finals rematch with #5 Dom Demas of Oklahoma. Likewise Jarret Degen advanced at 149 and will look for revenge against Lugo in the quarterfinals tomorrow. Earlier in the season Lugo defeated Degen in Hilton, but last year it was Degen who held the advantage, so the Cyclone will look to recapture that magic for this meeting.

Freshman David Carr made it three straight Cyclone wins on the chamtpionship side. Tomorrow he will face #11 Wyatt Sheets of Oklahoma State, who was his Big 12 finals opponent.

Two Cyclones dropped their bouts on the championship side and will look to rebound with wins tomorrow morning in hopes of keeping their All-America bids alive. The team’s bookends Alex Mackall and Gannon Gremmel both saw their championships run end and will have their first consolation matches tomorrow. They’ll join teammates Todd Small, who beat Northern Iowa’s Jack Skudlarczyk to stay alive and Marcus Coleman.

Senior Chase Straw saw his tournament end with a loss this evening.

Another team climbing up the team race ladder was the Panthers who sit in 13th place, up from 16th. The Panthers put two into tomorrow’s quarterfinal round and only lost one of their qualifiers.

The Panthers got their first quarterfinalist in 2019 All-American Bryce Steiert, who once against defeated Oklahoma State’s Joe Smith to reach the quarterfinals. Tomorrow Steiert will take on #4 Dylan Lydy of Purdue, who defeated the Panther wrestler in both the Cliff Keen finals and at the Midlands. Top-seeded Taylor Lujan will also compete in tomorrow’s quarterfinals where he will take on Big 12 foe Anthony Montalvo of Oklahoma State, who is the #9 seed.

Rebounding after first round losses were Jay Schwarm and Carter Isley at 125 and 285 pounds respectivley. The Panthers 133-pound starter Jack Skudlarczyk was eliminated following his oss to ISU’s Small.