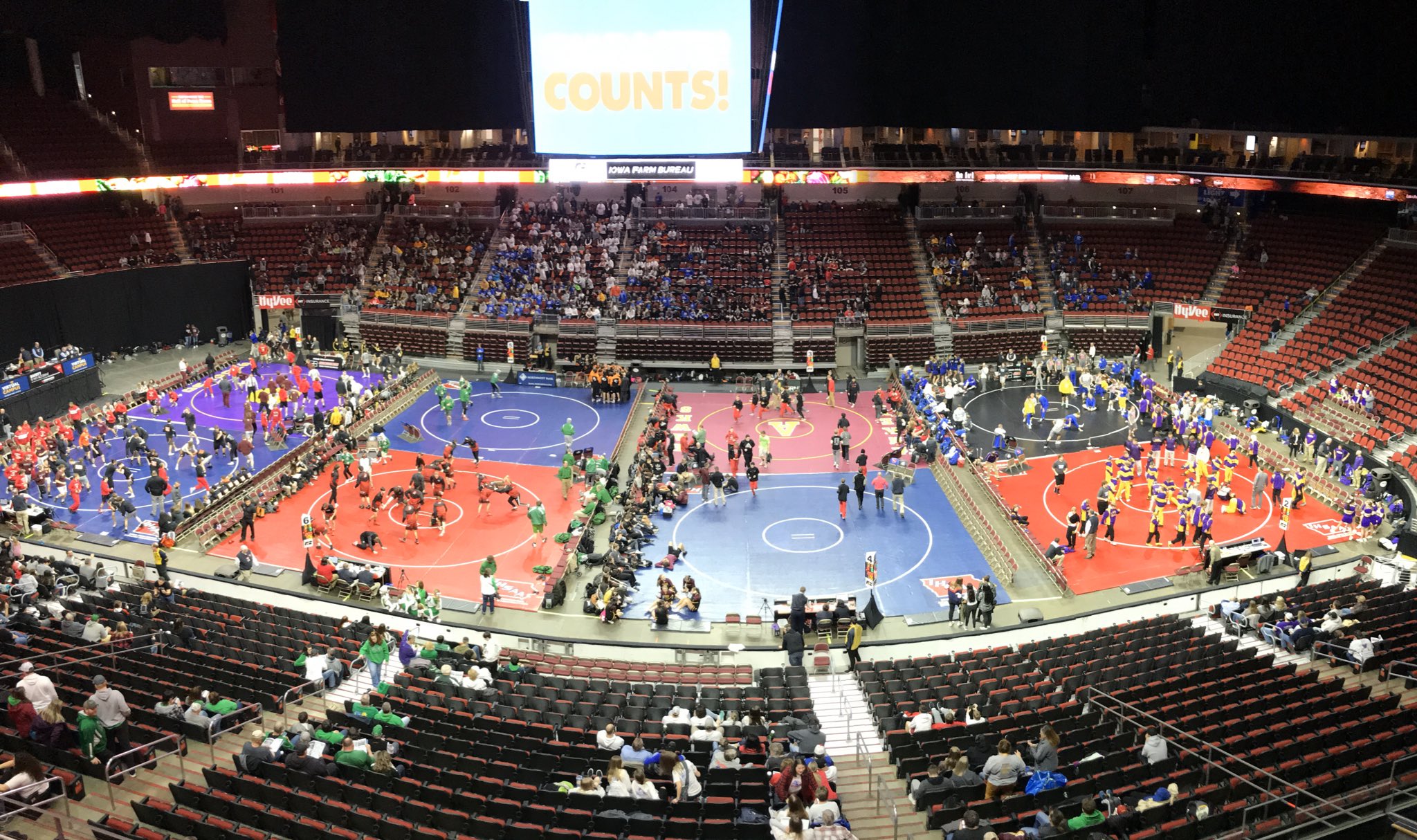 State Duals to stay on current schedule
The IHSAA’s wrestling advisory committee met in Boone on Feb. 27 to discuss the future of the state dual team tournament and wrestling’s postseason.
Asked to consider possible date and venue changes for state duals and their effects on sectional tournaments, the group preferred the IHSAA keep state duals in the current arrangement at Wells Fargo Arena the day before the traditional tournament. No formal recommendation was made. The approved agreements with Iowa Events Center include keeping state duals at Wells Fargo Arena.
The committee, alongside leadership from the Iowa Wrestling Coaches and Officials Association, was primarily concerned about how an IHSAA staff proposal – moving state duals to the current weekend of sectionals and a different facility, shifting all classes to district events as the only tournaments for individual state qualifying – would be executed, and would affect Class 2A and Class 1A programs.
The committee will still hold its annual spring meeting with plans to address possible qualifying procedures for postseason duals, and other recommendations.
FULL RELEASE FROM IHSAA:
DES MOINES, Iowa – The Iowa High School Athletic Association’s Board of Control approved contracts at last week’s meeting with Spectra, operator of Iowa Events Center, to keep the state wrestling tournaments and state basketball tournament inside Wells Fargo Arena through at least 2025. The board meeting took place on Thursday, March 12 at the Iowa Hall of Pride.
“We are excited to extend our agreement with the Iowa Events Center to host our state wrestling and basketball championships at Wells Fargo Arena,” IHSAA executive director Tom Keating said.
“This extension allows our student-athletes to continue to experience the thrill of state tournament competition in a first-class venue. This terrific facility, paired with the hospitality our fans and teams are shown by the Des Moines metro business community, is a winning combination.”
The contract extensions ensure the IHSAA’s two highest-attended tournament events stay in Des Moines, and include five optional annual renewals after 2025 which could take the contract through 2030.
The traditional wrestling tournament has been in the state capital every year since 1972, and basketball every year since 1963. Both events moved to Wells Fargo Arena once it opened in 2006.
“High school athletics are a tremendous source of pride for Iowa communities and we are proud to work with Tom and the IHSAA to keep the state wrestling and basketball championships in Des Moines at Wells Fargo Arena,” said Spectra’s Chris Connolly, general manager of Wells Fargo Arena.
“We are excited to work in conjunction with the IHSAA to provide all participants, support staff, and fans with an unmatched state tournament experience well into the future.”
State wrestling currently has four contracted dates, including one day for duals (see below) and three for the traditional tournament. State basketball’s schedule is five days since the IHSAA made the shift away from a six-day format in 2018.
“This is fantastic news for our metro,” Catch Des Moines CEO and president Greg Edwards said. “The IHSAA has a long history in bringing two of its largest events to our capital city. The IHSAA state wrestling championships continue to lead the country in attendance, and the boys’ basketball tournament has a great impact too. Both of these events generate huge economic benefits to our Iowa Events Center and so many local businesses. We are grateful for their continued support.”
The IHSAA is concluded the state basketball tournament last Friday with attendance restrictions at Wells Fargo Arena.
FUTURE TOURNAMENT DATES
Wrestling
February 17-20, 2021
February 16-19, 2022
February 15-18, 2023
February 14-17, 2024
February 19-22, 2025
IHSAA to start student advisory committee
The Board of Control approved the creation of a student advisory committee last Thursday, to start with the 2020-21 school year. The IHSAA is seeking students who participate in interscholastic athletics and activities, are focused on leadership, and interested in becoming liaisons on behalf of students for the IHSAA, staff, Board of Control, and member schools.
The IHSAA is seeking the perspective of advisory committee members on proposed by-law changes, state tournament assistance and feedback, while also providing leadership and educational opportunities.
The 12-member committee will consist of six juniors and six seniors each year, with applications opening later this month and selections notified in May.
Van Meter’s Durflinger joins board
The newest member of the IHSAA’s Board of Control is Van Meter superintendent Deron Durflinger. He was elected after Humboldt’s Greg Darling, the Central District representative, resigned his position. Durflinger’s term began with last Thursday’s board meeting, and he will serve the remainder of Darling’s term – through Nov. 2021 – and is then eligible for reelection.
BEDS enrollment for 2020-21 activities
The annual Basic Educational Data Survey from the Iowa Department of Education, which the IHSAA uses for enrollment-based sport classifications, has been approved by member schools and was approved by the Board of Control. The enrollment numbers include students from grades 9-11 from the previous school year (2019-20) for classifications in the upcoming school year (2020-21). It is available to view HERE and on the General Resources page.
BEDS enrollments were used to create classifications and districts for the 2020 football season, which were announced in February. Football schedules are currently being prepared for a public release later this month.