Panthers in Third Place after Day 1 in Tulsa 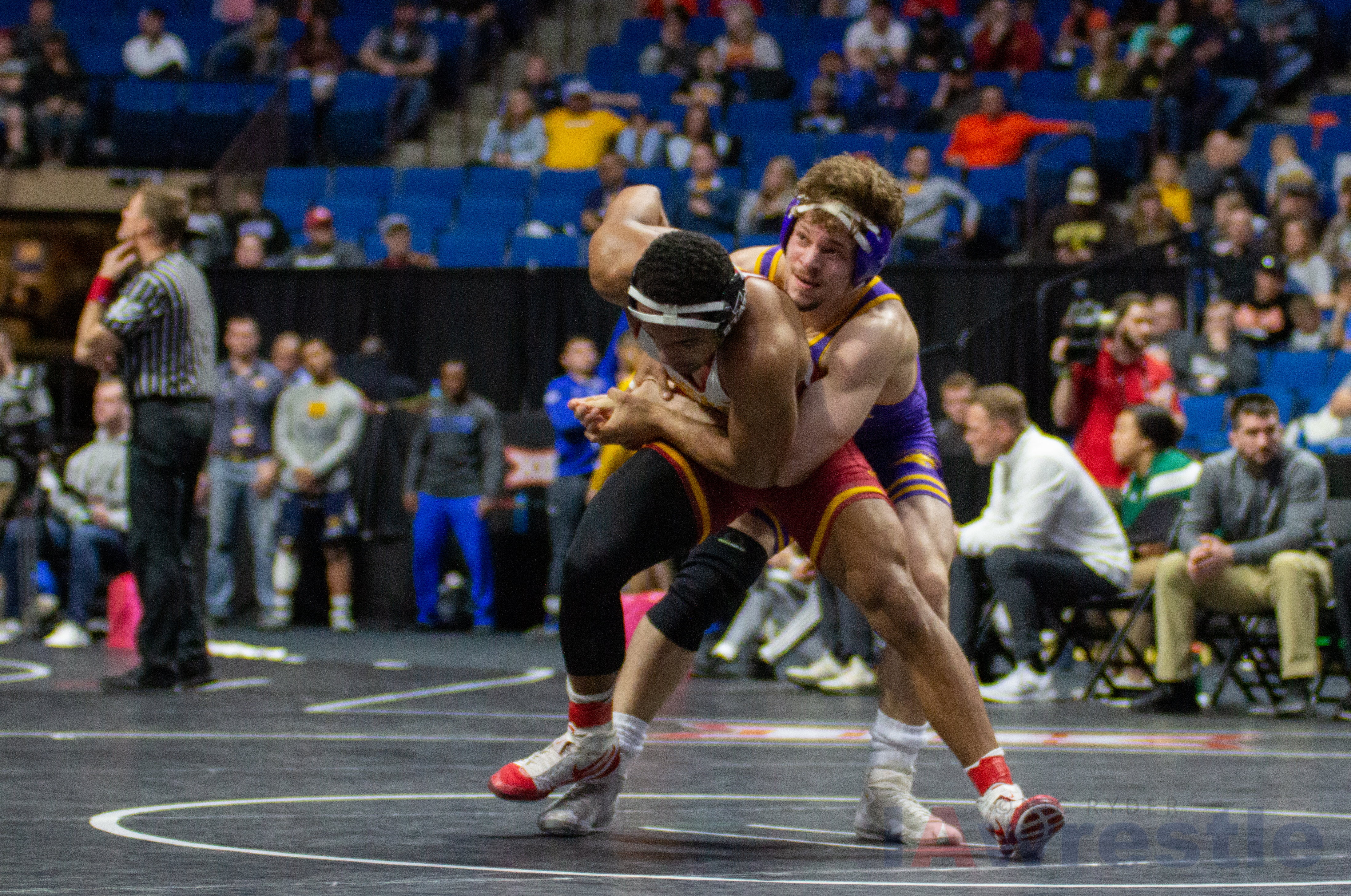 It wasn’t quite the day the way wanted, but Northern Iowa came out of Session II of the Big 12 Championships with two finalists, nine wrestlers still in the competition, and just 1.5 points behind second place Iowa State.

“I’m proud of how they responded.”

Bryce Steiert was the first finalist for the Panthers. He wrestled Oklahoma State’s Joe Smith in a rematch from their dual meeting a month ago. It was a little lower scoring match for the Panther, as Steiert took it 4-1.

“He’s going to try to block you out a little more,” Steiert said. “His gameplan was to wrestle a one-one match and try to score.”

Smith did just that in the first and second periods, mainly tying up with Steiert and trying to wear him out. That plan didn’t work out though. With the match tied 1-1 in the third, Steiert was able to connect on a takedown and ride Smith out for the win.

Taylor Lujan will go back to the finals of the Big 12 for the third year in a row as he attempts to repeat his 2018 appearance with a win. Lujan took down Iowa State’s Marcus Coleman 4-0 to earn his spot in the finals.

Lujan’s match was a lot like Steiert’s semifinal, not a lot of scoring from the feet. Lujan rode Coleman out of the second period and earned a quick third period escape to go ahead 1-0, before scoring a takedown with under 40 seconds left to advance.

“He’s (Coleman) a lot stinger in the hand fighting this time. He’s a great competitor, every time it’s different.”

Most of the Panther victories came on the backside of the brackets though. Jay Schwarm got things started off with a fall, and then followed that up with another fall to make the consolation semifinals tomorrow.

“We scored a lot of points on the backside. Four of those guys got into the top six.”

Three other Panthers earned their way to the consolation semifinals: Jack Skudlarczyk, Paden Moore, and Carter Isley all came away with two victories each. Skudlarczyk took down Iowa State’s #5 Todd Small 10-7 in a rematch from the UNI/ISU dual a few weeks ago. Skudlarczyk then took down WVU’s Lucas Seibert 11-1 to advance again.

Moore’s first win came by fall in 5:57 against SDSU’s #7 Peyton Smith and then a workman like win against West Virginia’s #6 Alex Hornfeck. The pair of upsets puts Moore one win away from a spot in the NCAA tournament.

At 165 pounds Austin Yant won his first match on the backside, a 4-3 decision against #3 Randy Meneweather from Air Force, but dropped a 6-3 match against Wyoming’s Cole Moody. Yant will wrestle for 7th tomorrow against UNC’s Jordan Robison.

The only Panther completely out of the tournament is Isaiah Patton. The undersized 197 pounder dropped an 8-3 decision to Utah Valley’s Tanner Orndorff in the first consolation round.

Overall, it was a much better session for UNI than the first one.

“I’m happy with our response,” Schwab said. “Now we’ve got to have a bunch of guys get odd numbers.”