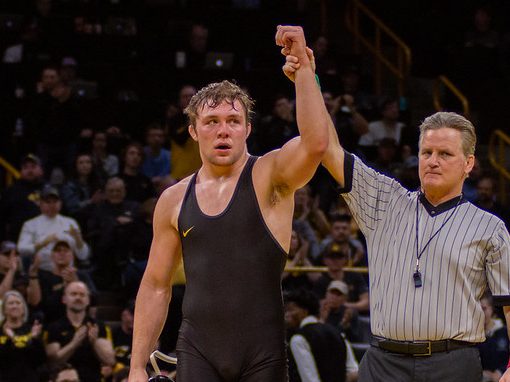 The top-ranked Iowa Hawkeyes will attempt to continue their undefeated season as they head into this weekend’s Big Ten Championships hosted by Rutgers in New Jersey. Iowa will be seeking to win its first conference title since 2015, the year they shared the title with Ohio State. In addition to the title in 2015, Brands has led the Hawkeyes to three other conference crowns near the beginning of his tenure as head of the program in the late 2000s.

This year’s squad comes into the Championships with an impressive 10 wrestlers all seeded third or better based on the conference’s pre-seeds released earlier this week. With every Iowa wrestler pre-seeded top three for our preview we will take a look at their projected quarterfinals opponent, and since if they wrestled to seed all would be in the semifinals, we also took a look at those matches as well.

For any of those interested, we did a simulation of the Big Ten brackets using WrestleStat’s prediction engine for all ten weight classes. For that breakdown head over to our Rokfin channel to see those.

As the top seed Lee will be in the driver’s seat this weekend over the likes of Devin Schroder (Purdue) and Patrick McKee (Minnesota). The surprising fact here is despite being a two-time NCAA champion, Lee is in search of his first Big Ten title this weekend (though we all know which title Lee values the most in the college season).

Lee hasn’t faced Nic Aguilar (Rutgers) who is the eighth seed, and Wisconsin did not make the decision to pull Eric Barnett’s redshirt until a couple of weeks after the Badgers faced the Hawkeyes in Carver.

For a potential semifinals opponent, Lee has Justin Cardani (Illinois) and Jack Medley (Michigan) on his side of the bracket. Iowa did not wrestle Illinois this season, but Medley is the only wrestler this season that did not lose by bonus to Lee – though it was a seven point loss, 8-1 decision in Ann Arbor.

The third seed at 133 pounds is Austin DeSanto, who finds himself behind Seth Gross (Wisconsin) and Roman Bravo-Young (Penn State) as the top two seeds respectively. This will be one of the more interesting weights to watch this weekend as the Big Ten is loaded with NCAA title contenders, and anyone of these wrestlers winning this bracket can set themselves up for the top seed in Minneapolis for the NCAA Championships.

The road for DeSanto will be a rather difficult one for him to navigate based on matchups. As a potential quarterfinals opponent he could face Ridge Lovett (Nebraska), who DeSanto beat 7-4 during the regular season dual meeting. DeSanto looked strong early on in his match with Lovett, but the Husker true freshman showed off how tough he can be in the top position, which ultimately made a huge impact on the outcome on that match. Prior to Lovett’s ride DeSanto was controlling the match from neutral.

In the semifinals, DeSanto should face Bravo-Young. For those that don’t remember, Bravo-Young was the wrestler DeSanto had to injury default to in January due to a knee injury. Since returning DeSanto doesn’t appear to have lost a step, but even though the injury may have played into the result, Bravo-Young looked to be on the verge of scoring big point against DeSanto. Last year DeSanto was 2-0 against Bravo-Young.

On the top side is Gross, whom DeSanto is 1-1 against. Back in December DeSanto won an impressive 6-2 match against Gross, but the Badger wrestler returned the favor at the Midlands with a 6-5 win. There is no questioning’s DeSanto’s ability to win this weight this weekend, but he will need to be at peak to navigate this tough field.

Coming in at 141 is Max Murin who sits behind top-seeded Nick Lee (PSU) and Luke Pletcher (OSU) as the top two seeds in this bracket. During the season Murin missed a few duals due to an injury, but while in the lineup he looks to have taken a step forward from a year ago. Last year March was the best version of Murin as his strong run at the conference tournament propelled him to a top-eight seed at nationals, where he made it to the bloodround.

The road to wrestling to seed will be a tough one for Murin. In the quarterfinals he has a potential rematch with All-American Mitch McKee, who Murin needed overtime to defeat last month in Carver. Another win against McKee would move him into a match against Pletcher, who is one of the top wrestlers in the country at this weight.

Should Murin fall to the backside he will find some difficult competition. Seeded fourth is Chad Red (Nebraska), who holds the only victory over Murin this season. Fifth seed Tristan Moran (Wisconsin) also gave Murin a tough battle earlier in the year.

One of the most impressive improvements from 2019 to 2020 has been Pat Lugo, who navigated a ridiculously difficult schedule to enter the postseason with just one loss, and ranked second in the country. His lone loss is to the nation’s top-ranked wrestler, and top-seeded Big Ten wrestler Sammy Sasso (OSU).

The Big Ten has eight wrestlers ranked in the top 20 nationally, and of the top ten ranked wrestler Lugo has faced seven of the nine. The only two Lugo has not faced this year are Missouri’s Brock Mauller, and Princeton’s Matt Kolodzik – who came out of Olympic redshirt.

In the quarterfinals Lugo will likely face Collin Purinton (Nebraska), though Griffin Parriorr (Purdue) is a threat to win by upset and advance. Assuming things go to seed Lugo would face #3 Brayton Lee (Minnesota) in the semifinals, which was a 3-2 decision for Lugo in February.

Coming off an upset to end the regular season, Kaleb Young will look to recapture some of his 2019 postseason magic this weekend as he enters seeded second in the Big Ten.  Young was perfect in Big Ten duals this season with all of his losses coming in non-conference duals (David Carr, Quincy Monday, and Wyatt Sheets). His projected quarterfinal round opponent would be Peyton Robb (Nebraska) who he defeated 6-4 during the dual meeting.

If he advances he would face Kendall Coleman (Purdue) and Young holds two wins over Coleman. The first being a fall in the Midlands semifinals and then a couple weeks later he beat Coleman 4-3 at Purdue. The top seed is Ryan Deakin (Northwestern) who has really emerged as a title contender this season, though last year Young managed to beat Deakin twice in March at the NCAA tournament.

Looking to repeat as conference champion is Alex Marinelli, who enters this weekend as the #2 seed with his only loss to the top-seeded Vincenzo Joseph (PSU). The loss to Joseph was Marinelli’s first career regular season loss in his three years as a starter for Iowa and he will be in the hunt to avenge that loss this weekend.

As a potential quarterfinal we could see Marinelli face Dan Braunagel (Illinois). In their only career meeting at the 2018 Midlands tournament Marinelli won by major decision against Braunagel. A win will likely set up a rematch with Evan Wick (Wisconsin) and Marinelli will look to make it five straight over the Badger wrestler after dropping their first career meeting. The average margin of victory for Marinelli is 1.5 points over the last four matches.

Assuming seeds hold we should see a 2019 Big Ten finals rematch between Marinelli and Joseph. Last year Marinelli won 9-3, which was his second straight win over Joseph. In January Joseph got his first win in the series with a 7-5 win in Carver.

Iowa’s other top-seeded wrestler is Michael Kemerer, who earned the top spot with a perfect season including his impressive victory over three-time NCAA finalist Mark Hall (PSU). The move from 157 has looked good on Kemerer this season, as he continues to win at a 60%+ bonus clip in an upper weight class, and he has earned some convincing victories against some of the weight’s top competition.

As a potential quarterfinal Kemerer could face either #8 Layne Malczewski (MSU) or #9 Tyler Morland (Northwestern) depending on how that first round match goes. His only history is with Malczewski, whom he beat by major decision in the dual meeting this year.

That should advance him to the semifinals where again he is likely to face either of #4 Devin Skatzka (Minnesota) or #5 Mikey Labriola (Nebraska).. Both wrestlers are ranked in the top eight in the country so either could conceivably win that quarterfinal. In the regular season Kemerer won 3-1 against Labriola, and he pinned Skatzka in the first period.

All things considered, true freshman Abe Assad sits in a fairly decent spot heading into his first Big Ten tournament as the #3 seed at 184 pounds. In the quarterfinals he should have a rematch with #6 Rocky Jordan (OSU). While this was a close match when the two met during the regular season (Assad won a late match takedown to win 3-1), and that could potentially set up a rematch with Cam Caffey (MSU) in the semifinals. This was another close match for Assad this one going to Caffey, 3-1.

With Aaron Brooks (PSU) and All-American Taylor Venz (Nebraska) both located on the top half of the bracket, Assad should be every bit capable to wrestle in the Midlands finals a true freshman.

This weekend Jacob Warner has a good opportunity to position himself as one of the top seeds in Minneapolis with a strong performance. The 197 weight (along with 157) has the least amount of qualifying bids for the NCAA tournament, which is a good gauge to describe the depth. As a projected quarterfinal Warner could face Shakur Rasheed (PSU), which will be a rematch that went to Warner 4-2 during the dual meeting.

The next match will be his potential matchup with #2 Eric Schultz (Nebraska). During this year’s dual Schultz won 3-1, but as a freshman Warner defeated his Husker opponent by scores of 4-1 and 7-5. If Warner can get back in the win column it should set up a potential finals with the nation’s top-ranked wrestler Kollin Moore (OSU). These two did not hit during the regular season.

With the #3 seed at heavyweight, we will see if Tony Cassioppi is able to make any adjustments from the regular season to improve on his seed as he enters his first postseason. Despite his age, Cassioppi has surged to the top of the NCAA rankings and is currently ranked third behind Mason Parris (Michigan) and Gable Steveson (Minnesota) who just so happen to be the top two seeded wrestlers in this Big Ten bracket.

As a potential quarterfinals opponent Cassioppi could face #6 Gary Traub (OSU) who he defeated 9-3 during the dual meeting. That should give us a rematch with the aforementioned Steveson in the semifinals. During the dual Steveson won 7-5 in what was the second loss of the season for Cassioppi (the other being to Parris). An upset here would upgrade Cassioppi from All-American pick to finalist contender in Minneapolis.