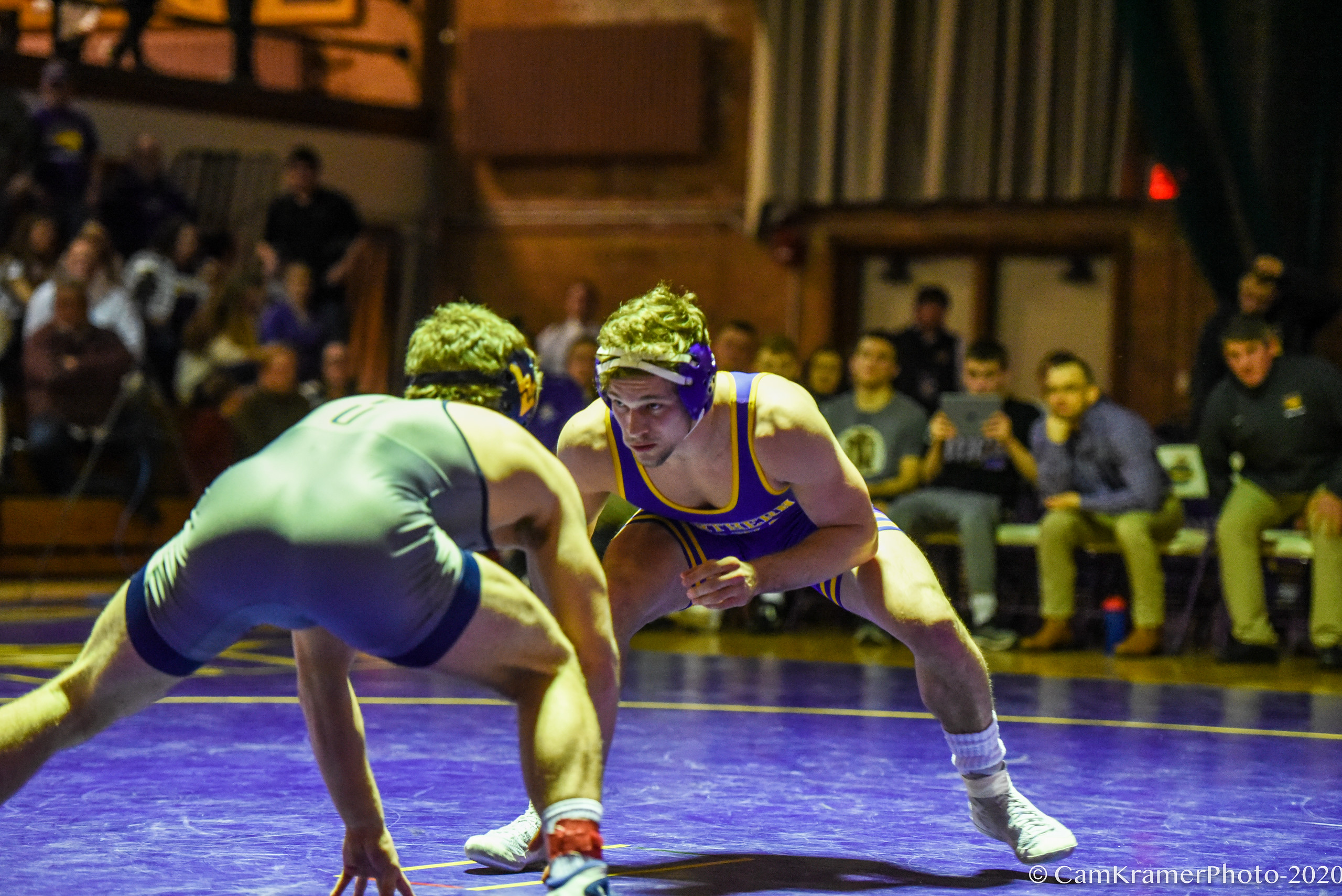 While most of the college wrestling world will be watching the Iowa State Tournament – well, maybe just those in Iowa – tonight, UNI will be traveling up highway 151 to Madison, Wisconsin to take on the 11th-ranked Badgers.

It’s the final dual for both squads, the second of two duals on the road for the Panthers, and senior night for Wisconsin. UNI is coming off an 18-16 loss at Iowa State, while Wisconsin defeated Michigan 20-12 at the UW Field House, both last Sunday afternoon.

The dual itself is fairly interesting because although there are eleven ranked wrestlers in total, but only three matches between ranked guys. Of those, two favor the Badgers: at 141 with #20 Michael Blockhus and #8 Tristan Moran, at 149 with #13 Max Thomsen and #19 Cole Martin, and at 285 with #11 Carter Isley and #6 Trent Hillger.

These matches are nearly all toss-ups as far as rankings go, with maybe 141 being an exception. They come at opportune weights for the Panthers though, with Blockhus, Thomsen, and Isley all capable of pulling out victories, and a win from either Blockhus or Isley could salt away a dual win.

Of course that depends on how the rest of the dual goes, and similarly to the Iowa State meet it will depend a lot on bonus points and winning the matches UNI is favored in. Of course after last week that starts with Bryce Steiert, who is facing unranked Jared Krattiger and looking for a solid bounce-back win before the Big 12 Tournament. Taylor Lujan is in about the same boat – minus the “bounce-back” part – but he’ll want to finish his regular-season out strong, preferably with bonus points.

If the dual starts at 125 I would expect UNI to lead 6-0 after the opening match. Jay Schwarm has proved me wrong all season, racking up 15 wins by fall (14 DI wins, which leads the nation) pushing him into fifth place all-time in UNI history with 49 total for his career. He would need four more to tie fourth-place John Kriebs with 53 and five more to tie third place (and best name for a person every) Rich Powers with 54.

Anyway, if Schwarm can get six on the board for the Panthers, I would expect Wisconsin’s #1 Seth Gross to match try to match it. Gross has been on a tear this season, dropping only one match on the year and winning with bonus points in all but six matches. If Jack Skudlarczyk were to keep this to even a major decision win, that would be a big win for UNI.

157 provides a little bit of an interesting wrinkle for both sides. UNI’s 157 pound backup, Keaton Geerts, has defeated Wisconsin’s Garrett Model twice in their careers – both times last season, once by tech fall and once by pinfall. But Geerts isn’t scheduled to wrestle, instead it’s senior Paden Moore, who won a come-from-behind match last week with Iowa State backup Grant Stotts. This is one of the swing matches of the dual – if everything else goes chalk this could decide the outcome.

This should be a good dual, no matter who wins. Much like the Iowa State dual it could come down to a less than three-point margin at the end, so any extra points or any upsets along the way could be huge. It’s Wisconsin’s senior night, and they’ll have a packed house ready to yell at the Panthers, so they’ll have another opportunity to work on the getting prepared for a “big moment” as Schwab talked about last week.

The dual will be live on BTN (actual TV!) and I’ll be up in Madison with live coverage. It’ll mostly be on my Twitter account, since we’re in the middle of state tournament coverage and everything, so give me a follow and check back for updates throughout the night.