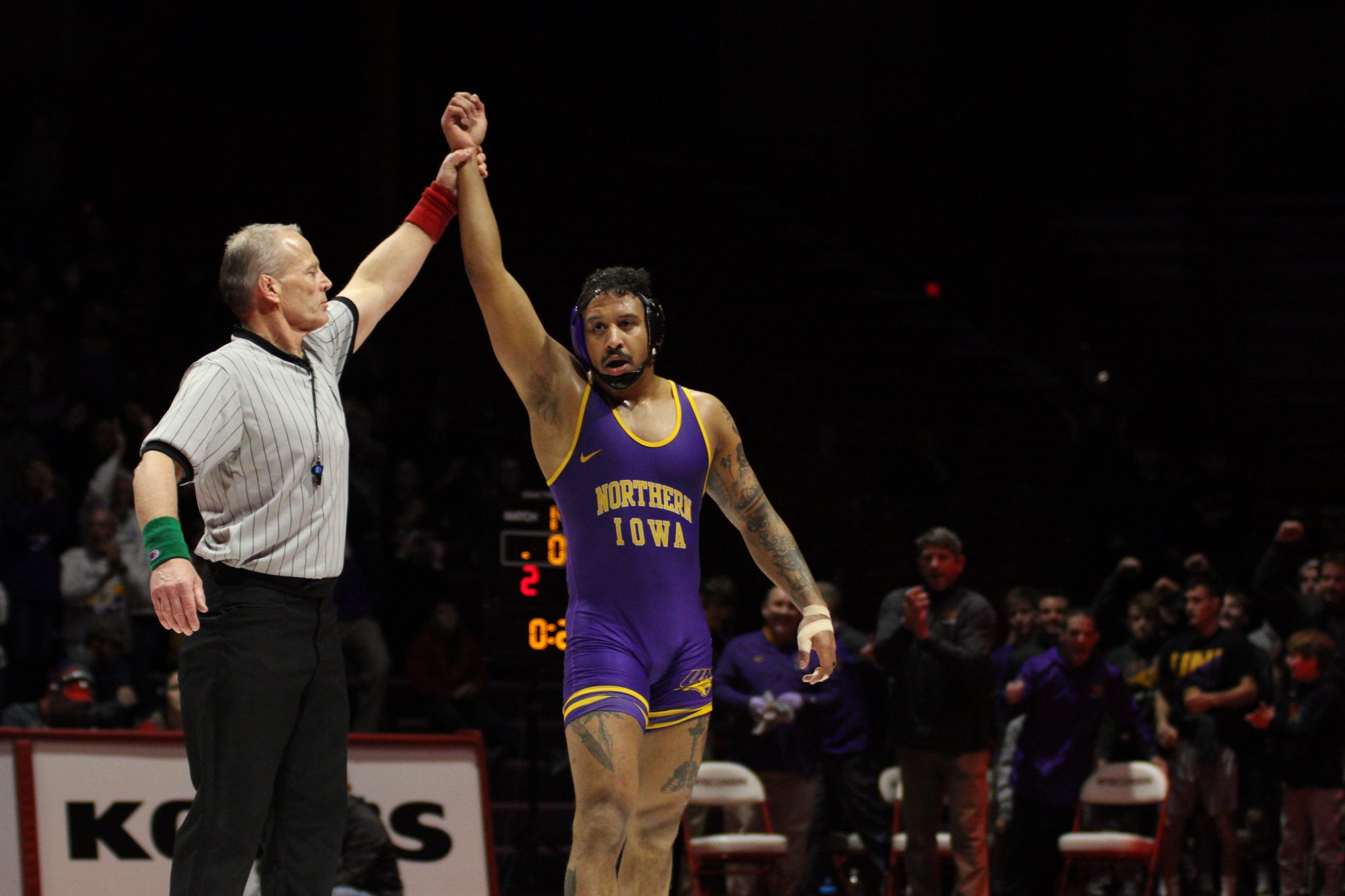 It was senior night in Wisconsin Thursday when the Panthers rolled into town. Well, I should be more specific, it was officially senior night for the Badgers, but UNI had no plans to celebrate them.

UNI seniors went 4-0 on the night, picking up three wins with bonus points and one big decision that won the dual for the team from Cedar Falls. UNI walked out of the UW Field House with a 20-18 team win.

Badger seniors went just 2-3 on the night, and only one of them picked up bonus points – Seth Gross at 133 pounds.

Isaiah Patton, officially UNI’s 197 pounder – he actually weighed in at 187, near the minimum to weigh in at for the weight class – took a few shots during his second tiebreaker win over Taylor Watkins, but none connected. The pair went through the first sudden victory tied at 1, and with Patton riding Watkins out, it appeared that all he would have to do was escape for a one point win.

“I’m just trying to stay focused and not force anything,” Patton said after the dual. “Reflecting on my last few matches, that was wehre I kind of faultered, where I just forced things. So this one I just wanted to be patient and take my shots when they were there.”

But a pair of cautions were given to Patton on bottom to start the tiebreaker, and coupled with a caution that UNI thought the head official rescinded in the second period, gave Watkins a temporary lead. Patton escaped and the pair were tied at two going to the second tiebreak.

Patton chose down to start the second set of tiebreaks after another scoreless sudden victory, he escaped, rode Watkins out to get a win in his last dual meet as a Panther, and salted away the victory for UNI.

“Just trying to be patient, and not force stuff. When I wrestle my style and I slow him down and make him wrestle my match then things turn out for the better.”

Jay Schwarm did Jay Schwarm things in his opening match against Eric Barnett. It seemed like Schwarm wrestled the exact same match he did last week against Iowa State’s Alex Mackall, getting the first takedown, giving up a reversal and then reversing Barnett before working for the fall.

It was Schwarm’s 15th fall of the year, he currently has 14 against DI opponents, leading the nation.

#20 Michael Blockhus put on show for the Panther fans that made the trip out, putting together two attacks in the first and two more in the third to walk away with a 9-4 over #8 Tristan Moran. The match was one of the best of Blockhus’ young career as he continued to attack, and connect, on shots on Moran.

Wisconsin took the lead going into intermission, 11-9, after a pair of wins by #19 Cole Martin and Drew Scharenbrock at 149 and 157 pounds. Martin had to come from behind to defeat UNI backup Triston Lara, who was subbing in for Max Thomsen for the night.

After a major decision win by Wisconsin’s #4 Evan Wick, #5 Bryce Steiert and #4 Taylor Lujan – and this is going to sound like almost every other recap from this season – put UNI back on the winning side, each earning major decisions against their Badger opponents. Steiert and Jared Krattiger hand fought like their lives depended on it in the first period, and Steiert earned a pair of takedowns in there and tacked one on at the end for good measure winning 9-1.

Lujan had a little bit of a tougher go…but not really. He had a takedown and four point nearfall in the first, and then followed that up with a takedown in each the second and third periods. Lujan’s win put the Panthers up 17-15 and in a position where if they could win one of the two remaining matches they’d be in a good spot to win the dual.

And Isaiah Patton did not fail to disappoint.

#11 Carter Isley dropped the final match of the evening, a 3-0 decision to #6 Trent Hillger. The pair were scoreless through two periods as Isley chose neutral to start the second, but he was unable to finish any shots, and Hillger won the match on a third period takedown.

Wisconsin picked up other wins from Gross, a 16-0 tech fall over Jack Skudlarczyk, and Drew Scharenbrock, a 7-2 win over Derek Holschlag.

UNI moves to 8-4 overall and finished 6-2 in the Big 12 conference. The Badgers fall to 11-6 overall, and they wrapped up Big 10 duals at 4-5. The Panthers have the next couple of weeks off until the Big 12 Tournament in Tulsa, Oklahoma.

One thought on “Panthers Claw Back, Finish Badgers 20-18”