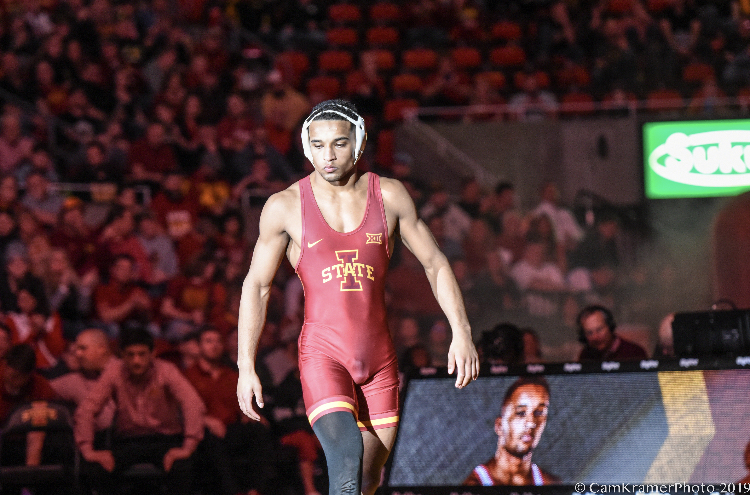 This looks to be one of those duals for the Cyclones to continue building confidence. That is not to say they’re not underdogs in a few weights.

Starting at 133 pounds, Todd Small is ranked just one spot below Anthony Madrigal at No. 16. Small put 17 points in Fresno, almost earning the tech fall, 17-4. Todd has looked great at times this year, and consistency down the stretch to the postseason will be key for the first year starter.

The marque matchup of the afternoon will be at 141 pounds. We’ll see, No. 6 Ian Parker take on No. 5, Dom Demas. Parker did beat Demas in the dual last year in Hilton in sudden victory. Since that win, he’s 0-2 versus Demas. We do know Ian’s capable, by last year’s result, and he hasn’t been taken down since the CKLV. The way Parker’s been wrestling of late, it wouldn’t surprise me at all to see the slight upset here.

Sam Colbray cutting down to 174 pounds probably has a few of you scratching your heads a month later. Since making the move, Colbray is 4-3 but the losses have been by three points or less, so he’s right there in every match. His offensive output has got to increase; he’s scored one takedown in his last two matches. His offense, when it’s firing, is as good as anyone out there. He’ll have his hands full with No. 14, Anthony Mantanona.

The last match where the Sooners are favored is at 197 pounds. Joel Shapiro will be looking to knock off No. 16, Jake Woodley. Joel used a takedown and two sets of four-point near fall in the first before pinning his opponent in the second period in Fresno. A win over a top twenty foe could be just what young Shapiro needs going forward.

No. 12 Alex Mackall has got to be chomping at the bit to get on the mat Sunday. He hasn’t wrestled competitively since Oklahoma State. If Mackall gets an early takedown this one could be over very quickly.

The much awaited return of No. 7, Jarrett Degen did not disappoint. Jarrett earned the fall in 4:27 against the Bulldogs, Greg Gaxiola last Friday night. For Iowa State to make a deep run this postseason, Degen’s presence is necessary.

We didn’t see No. 3 David Carr in California. Instead, Grant Stotts took a tough one-point setback to then No. 12, Jacob Wright. David was in the shop last week getting his oil changed, and fluids swapped according to, Brent Metcalf on Monday. Dresser followed that up Tuesday stating that Carr had a mild sprain and is day-to-day. So we could see Stotts go again on Sunday.

Putting in work on top last week was, Marcus Coleman. He had a two-point near fall and a four-point near fall in the second period on his way to a 13-2 major decision. This is just what Coleman needed to kick start his postseason run.

How many times have you seen a heavyweight score 21 points? That’s exactly what No. 14, Gannon Gremmel did last Friday, winning by a score of 21-8. Gremmel is Iowa State’s wild card. I’m interested to see his performance down the stretch leading into the Big 12 tournament.