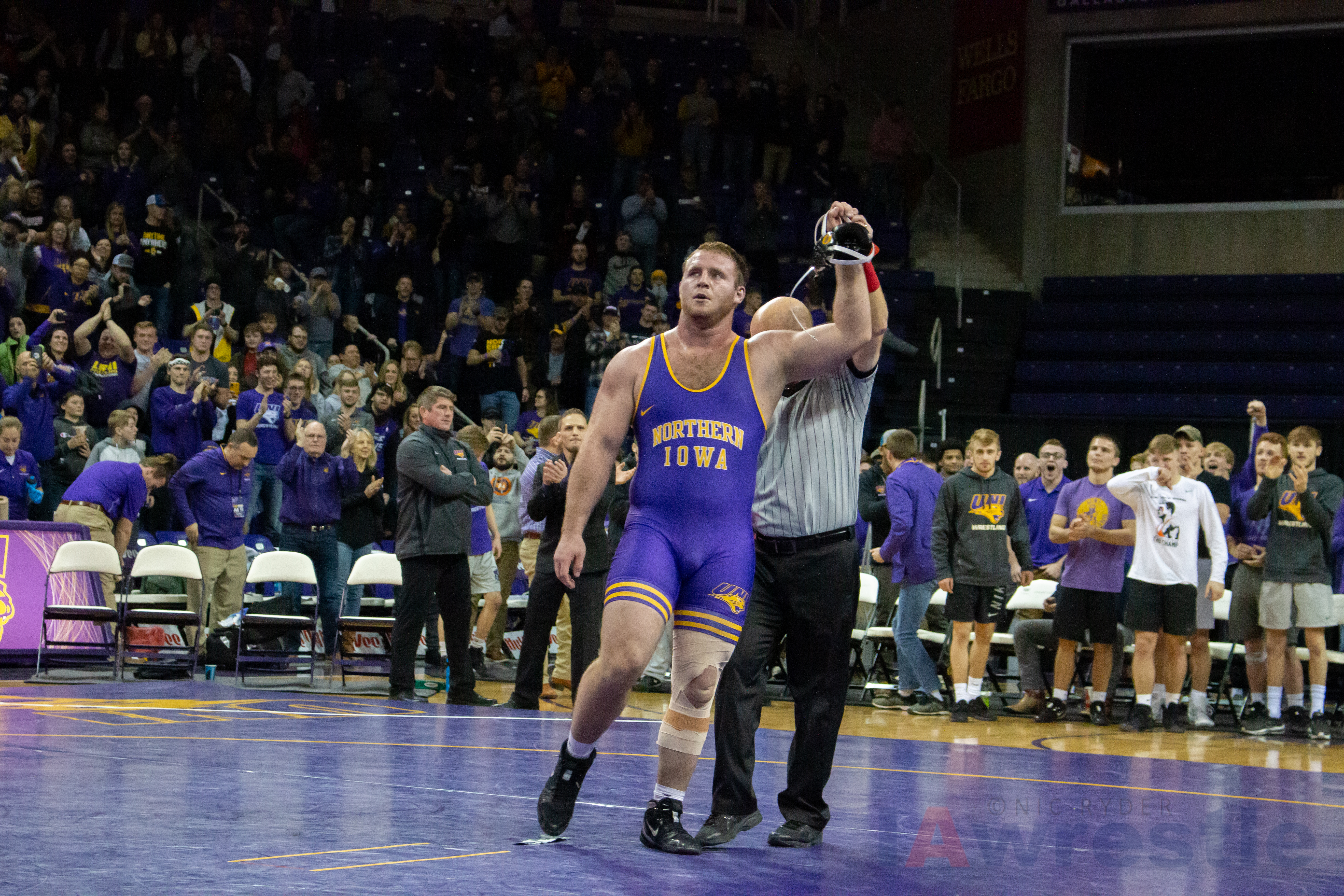 The UNI Panthers have left the Oklahoma section of the schedule 2-0 as they took down the Sooners (3-5, 1-4 Big 12) Saturday night 25-13. Pinfall wins by their lightest and heaviest wrestlers anchored the dual, and with Oklahoma State’s win over SDSU on Friday, UNI (6-3, 5-1 Big 12) is now in the driver’s seat for the Big 12 dual title.

Jay Schwarm got things started by doing Jay Schwarm things, nailing a body lock and eventually a cradle for a pinfall win over Christian Moody.

Max Thomsen was the only other Panther in the first half to get a win, picking up a 6-1 decision over Jacob Butler. Thomsen used a couple of solid single leg shots and earned a takedown in the first

Austin Yant got things going in the second half with a 10-0 shutout of Elijah Joseph. Yant used a pair of go by’s and then put on a ride that garnered a lot of time but no nearfall points. Joseph had no response to Yant, giving up several stall calls in the match as well.

In the match of the night #5 Bryce Steiert won a 7-2 decision over #18 Anthony Mantanona. Steiert connected on several high crotches, while Mantanona wanted to roll around more and embrace his inner Taylor Lujan, but that didn’t really work. Steiert was too strong to allow the Sooner to do much rolling at all and drew a couple of stalling calls along the way.

Taylor Lujan did not have any problems dispatching Darrien Roberts 9-3, though it would be good to see the Panther get some bonus points while winning all the time. He used a takedown in each period, plus an escape in the second, to get the win over Roberts.

As an aside, one of the commentators at one point said, “This is just a senior wrestling a puppy, but this is going to be a good puppy,” regarding Darrien Roberts. While Roberts may be many things, I can’t believe he has ever been a puppy.

With the match all but out of reach for Oklahoma as the heavyweights took the mat, Carter Isley led 4-3 before putting Collin McCoy away with a sweep single-to-a-cradle-to-a-fall in one of the quickest sequences seen at heavyweight this season. This came after Doug Schwab challenged a caution on McCoy to start the second period, which is something I don’t think I’ve seen before.

In a pair of closer-than-you-might-have-expected matches at 141 and 197 pounds, Michael Blockhus and Isaiah Patton both dropped decisions. Blockhus, taking on #5 Dom Demas, so a 1-1 match go to tiebreakers, where Demas hit a body lock and put Blockhus on his back for a four point nearfall. Up until then the Panther had done a good job of fending off Demas but ultimately came up short.

At 197, yes, Isaiah Patton took the mat against #16 Jake Woodley and put together an impressive defensive effort. Patton, who wrestled at 157 pounds just last season, was able to get to the third period down just 4-2 (and trailed on riding time) but was in on a shot when time expired.

The Panthers return home in two weeks for their senior night against West Virginia before hitting the road going to Iowa State. Oklahoma hosts Iowa State next weekend.