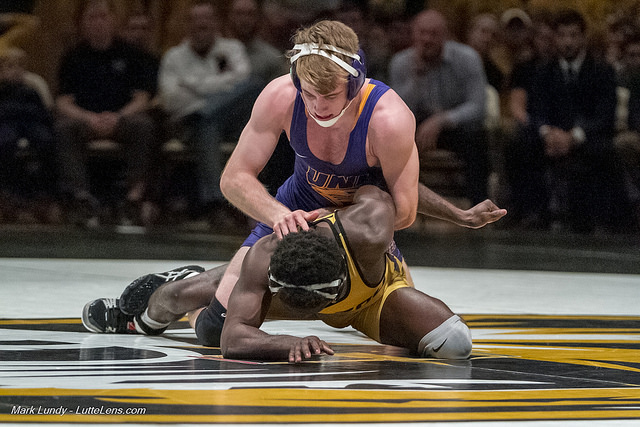 The UNI Panthers started off their weekend with a dominant performance against Northern Colorado on Friday night. The Panthers took eight of ten matches with two pins and one tech fall along the way.

The biggest news of the night was that Jacob Holschlag took the mat for the first time since being injured in UNI’s dual with Northwestern to start the year. Holschlag wrestled UNC’s normal 184 pounder Alan Clothier, who bumped up and knocked off the Panther 4-0. Holschlag was unable to get to much offense, and both men looked fairly gassed after the second period.

The start of the third saw Holschlag down just 1-0 and start the period on bottom. Clothier put in both boots though and rode Holschlag out, drawing three more stall points against the Panther.

Jay Schwarm got the dual started off in a big way, racking up 10 points before locking up Jace Koelzer in a cradle for the fall in 2:29. Easy peasy.

Jack Skudlarczyk got his first win in his last three matches with a 10-3 win over Mosha Schwartz. After a scoreless first period the two traded reversals after Skudlarczyk started on top in the second, then used a tilt to go up 6-2. Finishing out with an escape and other takedown, Skudlarczyk won 10-3.

At 141 pounds Michael Blockhus had scored a late escape point to tie his match at four before getting a takedown in sudden victory for the 6-4 win. Blockhus used a first period takedown and then a second period escape to take a 3-1 lead into the third. Chris Sandoval then had a takedown on the edge that was initially ruled out of bounds, but a challenge by UNC reversed that call and Sandoval had a 4-3 lead with 17 seconds left.

Blockhus drew a stall call against Sandoval when the Bear dropped to an ankle, the call also caused a restart, when Blockhus hit a roll and scored the tying E1 to send it to sudden victory. This call was also challenged by UNC, as they thought time had expired, but the call was upheld.

In what was supposed to have been the only match of the night between ranked wrestlers, UNC sent out Jimmy Fate at 149 pounds rather than #17Andrew Alire, so we were treated to a 6-1 Max Thomsen win. The match wasn’t as close as the score indicated, as Fate was unable to get anything going from any position.

Keaton Geerts was next up for UNI at 157 pounds, scoring a takedown in the first and third periods and racking up nearly five minutes of riding time over Jimmy Fate.

After intermission Austin Yant kept things rolling with a 2-0 win over Austin Matthews. UNC put out the senior in an effort to get anything going, but Yant put on a punishing ride in the third period to secure the 2-0 win.

Bryce Steiert went out and used three bow and arrows to rack up 12 total back points on route to a 16-1 tech fall win.

Taylor Lujan did Taylor Lujan things, wrapping up his match early in the third period for the second fall of the night. Lujan led 11-1 when he earned the fall.

At heavyweight Carter Isley is sidelined with a minor injury and Bryce Esmoil took the mat for the Panthers. Esmoil put Robert Winters Jr on notice with a punishing ride in the second and third periods. Unfortunitally Esmoil was unable to get any points off the ride and lost 4-2.

UNI will be in action on Sunday at Air Force at 1 PM CST. That dual will be streamed on TrackWrestling.