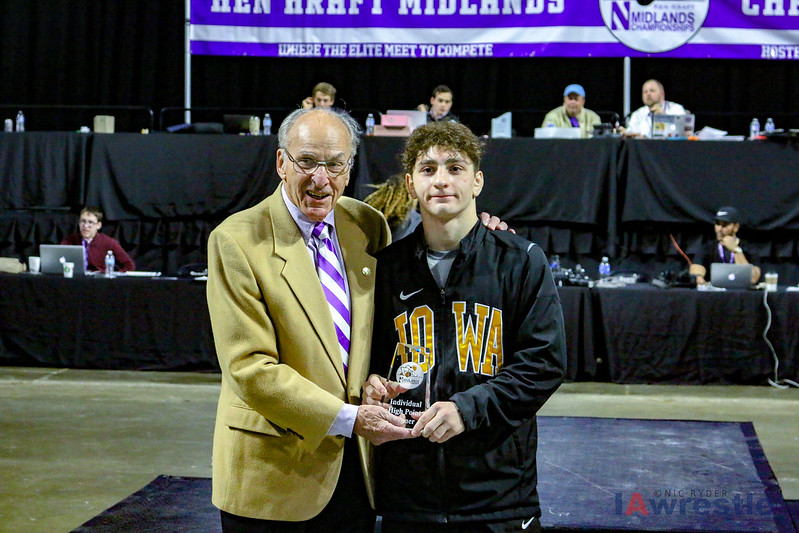 Next week in Evanston, Illinois the top ranked Iowa Hawkeyes will be in search of title number 29 at the 57th annual Ken Kraft Midlands. The team looks to enter the competition well positioned to win another team title and return two champions from a year ago.

Unfortunately the leading suspicion is that Iowa will be without one of their top threats this weekend with two-time NCAA champion Spencer Lee potentially being sidelined after winning a grueling freestyle tournament less than a week ago.

That means redshirt freshman Aaron Cashman will be the main face to watch at 125 pounds. While Lee and one of the fields other top wrestlers – returning NCAA finalist Jack Mueller is also expected to be absent due to an injury – this weight does feature Pat Glory who could be in the thick of a title race come March. Usually its hard for a wrestler to have a breakout performance when slotted behind a two-time NCAA champion, but this tournament could provide the opportunity for Cashman.

Update: Iowa’s match day notebook does list Spencer Lee as a probable for the Midlands.

Perhaps the creme de la creme when it comes to brackets this weekend will be the 133-pound field which will feature top ranked Austin DeSanto, 2018 NCAA Champion (and second ranked) Seth Gross of Wisconsin, and returning Midlands champion (at 125) Sebastian Rivera (who is ranked third). Its not often you can assemble the top three wrestlers in one bracket, but this could be the first of three brackets with this trio this season (Big Ten’s and NCAA’s being the remaining two).

DeSanto has the luxury of being the returning champion at this weight from 2019 and recently defeated Gross, which should mark him as the favorite.

We could learn a little more on the progression of Hawkeye sophomore Max Murin this weekend as he will be looking to return to the Midlands finals. In 2018 he was thwarted by UNI wrestler Josh Alber last season, and he will have his work cut out to improve upon his 2018 finish.

The top wrestler at this weight will be Oklahoma’s Dom Demas, who is ranked third in the country. Wisconsin’s Tristan Moran, UNI’s Michael Blockhus (Murin’s 2018 semifinals opponent) are other names to watch for in this bracket – as will Murin’s fellow teammate junior Carter Happel, who is a two-time Midlands medalist.

So far this season has been looking rather rosy for Pat Lugo, and a tournament win this weekend could rocket the senior into title contender. Making his return to NCAA action was North Carolina’s Austin O’Connor, who is the nation’s top ranked wrestler. Not only does this weight feature O’Connor but fellow top ten wrestler Max Thomsen (UNI), Yahya Thomas (Northwestern), and Griffin Parriot (Purdue) have this bracket shaping up to be a barn burner.

Earlier this season Kaleb Young was slotted as the nation’s #2 ranked wrestler, but after a pair of upsets the junior Hawkeye finds himself sitting #8 coming into this tournament. Young will have plenty of opportunities to make up some ground including a potential rematch with one of the wrestlers who upset him – Princeton’s Quincy Monday.

The top rated wrestler is Northwestern’s Ryan Deakin, who bested Young in the 2018 Midlands finals. Young came back to win two matches at the NCAA tournament against Deakin. Additionally top five wrestler Kendall Coleman of Purdue will also be in the field this weekend.

Iowa’s other returning Midlands champion is 165-pound standout Alex Marinelli who (wouldn’t you guess it) looks like he will lead a standout bracket. For starters there is Wisconsin’s Evan Wick – a wrestler that has given Marinelli numerous close battles over the past two seasons though since 2018 Marinelli has managed to come out on top of all meetings.

But the other big name is probably a wrestler Marinelli is looking forward to facing and that’s Virginia Tech’s David McFadden, a wrestler who pinned Marinelli at the 2018 NCAA tournament.

He’s not a reigning champion, but Michael Kemerer enters this weekend looking at potentially winning his third career Midlands title in what will be his fourth appearance. Last season Kemerer did not compete due to injury and we may only be two months into the season, but the All-American certainly looks to be making up for lost time entering the Midlands with a perfect record and all wins coming by bonus.

While Kemerer has appeared a man apart from his competition this weekend will give us a good measuring stick with #4 Dylan Lydy of Purdue and #5 Bryce Steiert of UNI in the field.

Where we still have some figuring out to do is at 184 pounds, which is the only weight we have seen head coach Tom Brands alternate starters between senior Cash Wilcke and freshman Nelson Brands. The younger wrestler started the first, second, and fourth dual of the season, and Wilcke getting that start in the third dual.

This is usually where decisions for the starting spot become much easier for the staff with a multi-day/match setting giving the coaching staff even more mat-time with their guys against outside competition to judge.

The top wrestler in the field will be UNI’s Taylor Lujan, who is #4 in the country.

The 197 bracket looks to be extremely interesting as Warner does enter as the top ranked wrestler, #2 in the nation, though their are several wrestlers in the field who have defeated him – some at this very tournament.

Coming off a huge win over Princeton’s Pat Brucki that’s obviously one of the bigger names to circle this weekend as the win by Warner put him in Bruck’s spot in the rankings. We also see Cal-Poly’s Thomas Lane, who was one of the wrestlers that defeated Warner at last year’s NCAA tournament.

Finally there’s Purdue’s Christian Brunner and Oklahoma’s Jake Woodley, who picked up wins against Warner during his true freshman campaign, though Warner also holds a win over both wrestlers.

While he is only a few matches into his first official season, Tony Cassioppi is off to a strong start to his career, rocketing into the top five of the rankings. So far in his career Cassioppi has only lost two matches – both during his redshirt season at this tournament. He will have a chance to redeem those losses as Central Michigan’s Matt Stencel and Campbell’s Jere Heino are both expected to be among the contenders next week.

We could also see another potential meeting with Wisconsin’s Trent Hillger, who Cassioppi knocked off earlier this month in Carver.

The other thing to keep in mind is Brands will likely be bringing several more wrestlers than those listed above. Iowa normally brings about 17 wrestlers to the Midlands, and Trackwrestling list the Hawkeyes as having over 20 wrestlers currently registered.

Its a good bet to expect to see several other wrestlers who are just outside the starting spot also get one of Iowa “invitational” slots. Some of those wrestlers getting the remaining invites could include Paul Glynn (133), Gavin Teasdale (133), Vince Turk (149), Jaren Glosser (149), Abe Assad (184), Zach Glaizer (197), and Aaron Costello (285).