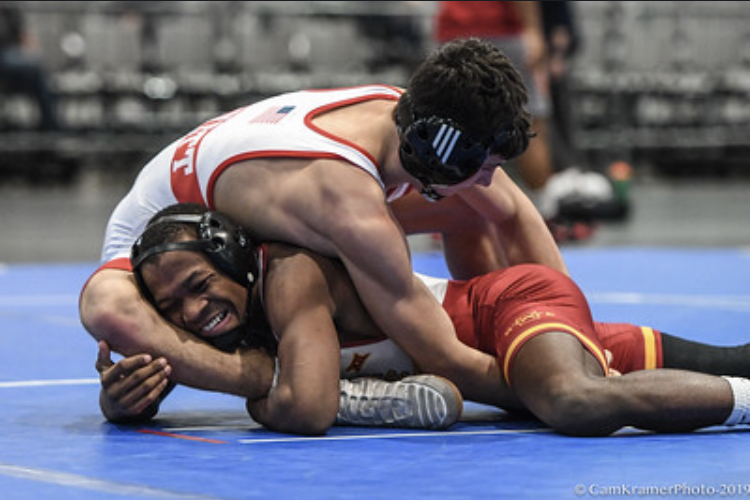 The Cyclones return home Saturday night after the brutal Cliff Keen Las Vegas Invitational. Iowa State had a half dozen podium finishers last weekend, but look to have lost, Jarrett Degen’s services for the time being. This will be the last time we see the Cyclones at Hilton in 2019.

#14 Alex Mackall finished with 4-2 record in Las Vegas a week ago. Two solid wins against Alex Thomsen (NEB), and an 8-5 victory over Brandon Courtney (ASU) for fifth place. Mackall will undoubtedly be looking to put big points prior to the Christmas break.

Leaving his mark at the CKLV was, Todd Small. His teammate, Austin Gomez mentioned prior to last weekend to keep an eye on Small, and was he right. Todd talked to the media Tuesday afternoon.

A 5-2 record, and fourth place finish last weekend, bolstered Ian Parker to #6 in The Open Mat’s latest set of rankings. Highlighting Ian’s tournament was a 5-3 win over Chad Red (Nebraska). Parker has been referred to as the teams spark plug around the wrestling room. Expect to see plenty of that spark Saturday night.

As mentioned by Kevin Dresser, #7 Jarrett Degen is a 50/50, game time decision whether or not he wrestles against UTC Saturday. Dresser also eluded to the fact that, Clear Lake three time state champ, Ryan Leisure is next on “The Hit Parade.” Depending on the severity of Degen’s injury; Leisure could be counted for an extended period of time.

We got to see #3 David Carr face adversity, and overcome it, at the CKLV. After suffering his first of the season in the semifinals to top ranked, Ryan Deakin (Northwestern), he wrestled back for third place. Carr blanked fellow top flight freshman, Kendall Coleman (Purdue) 4-0 in that placement match. The Hilton faithful will be looking for David to exit 2019 with a bang this weekend.

Let’s not forget that Chase Straw got off to a sluggish start last season. The new weight has brought new challenges. A strong performance to close out the calendar year is just what the doctor’s ordered for, Chase.

After a bye in the first round, #20 Marcus Coleman knocked off fifth seed #7 Devin Skatzka (Minnesota) 9-6. He’ll be looking to build off that as we head into the second half of the season.

The 184 pound bracket at the CKLV was the toughest on paper. #11 Sam Colbray just missed a top eight finish. A notable win for Colbray came in the round of 16 against #14 Jelani Embree (Michigan) by a score of 3-2.

Joel Shapiro is experiencing the grind of an NCAA DI wrestling season for the first time. He’s got immense upside, and a big win in front of the home crowd Saturday night is just what the red shirt freshman needs.

Starting quicker was on #15 Gannon Gremmel’s mind after the CKLV. He addressed the media Tuesday afternoon on this, amongst other things.