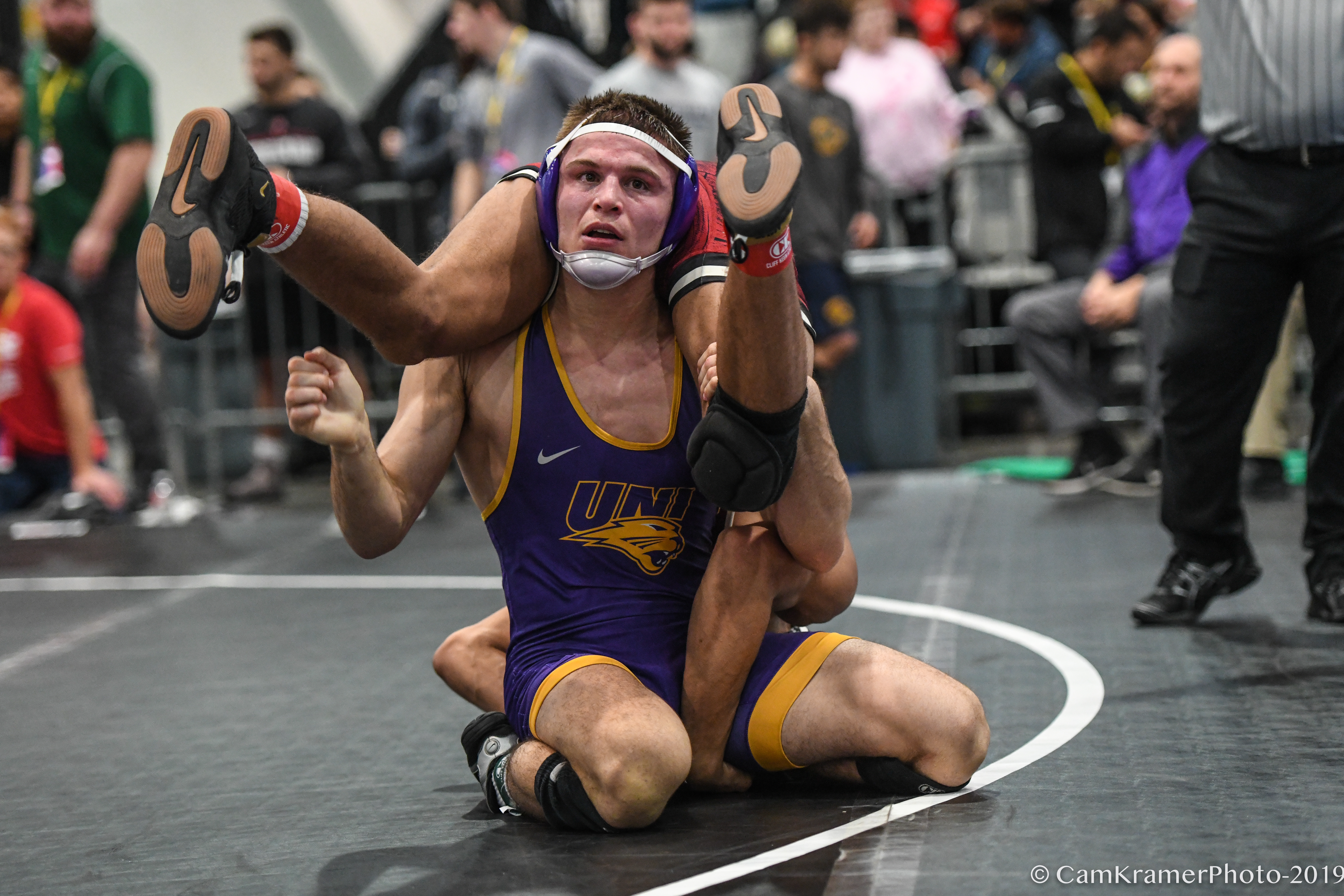 After a fairly successful morning session where Northern Iowa ended the day in first place, the Panthers wrapped up the evening session 7-1 and in a solid fourth. With four men on the frontside of the brackets they advanced three to the semifinals and had all three on the backside move on.

First up in the quarterfinals for UNI was Max Thomsen at 149 pounds in a dual rematch with Yahya Thomas from Northwestern. Thomsen won their first match, 4-3 and similarly won another one-point match, this time 5-4. Thomsen did not score a takedown Friday night, scoring three escapes and forcing Thomas into a stall point in the third period as he rode him out. The Panther earned exactly one minute of riding time to come out on top.

Bryce Steiert took down Jackson Hemauer just once in their quarterfinal match at 174 pounds, but it was enough as he earned a 4-3 win. Hemauer earned a pair of escape points and a locked hands call gave him his third point, but Steiert was too strong from neutral and the Bulldog found no offense. Steiert will face #4 Anthony Valencia in the semifinals tomorrow.

Taylor Lujan and Virginia Tech’s Hunter Bolen had the most exciting match of the night. Lujan came out with a pair of takedowns in the first, using his funk to stay, and roll, away from Bolen’s attacks, but the second period may have wore on Lujan a little more than expected, but after an escape point he still led 6-4.

Going into the third Bolen was on bottom and earned a reversal, tying the match, but Lujan came right back with a reversal and ride to earn the extra point. Bolen earned an escape but could not take Lujan down again and the Panther won 10-8. Lujan will take on NC State’s #3 Trent Hidlay tomorrow.

Carter Isley took on Michigan’s #1 seeded Mason Parris who dumped Isley off a single leg and earned a fall in 54 seconds.

Jay Schwarm wasted no time in his consolation match Friday night, running through Jakob Camacho with a double leg and then locking up a cradle for a fall in just 34 seconds. Schwarm will face #10 Alex Thomsen from Nebraska in another dual rematch. Schwarm won the first battle against Thomsen by fall.

Jack Skudlarczyk, Michael Blockhus, and Keaton Geerts all won on the backside to continue their tournaments as well.