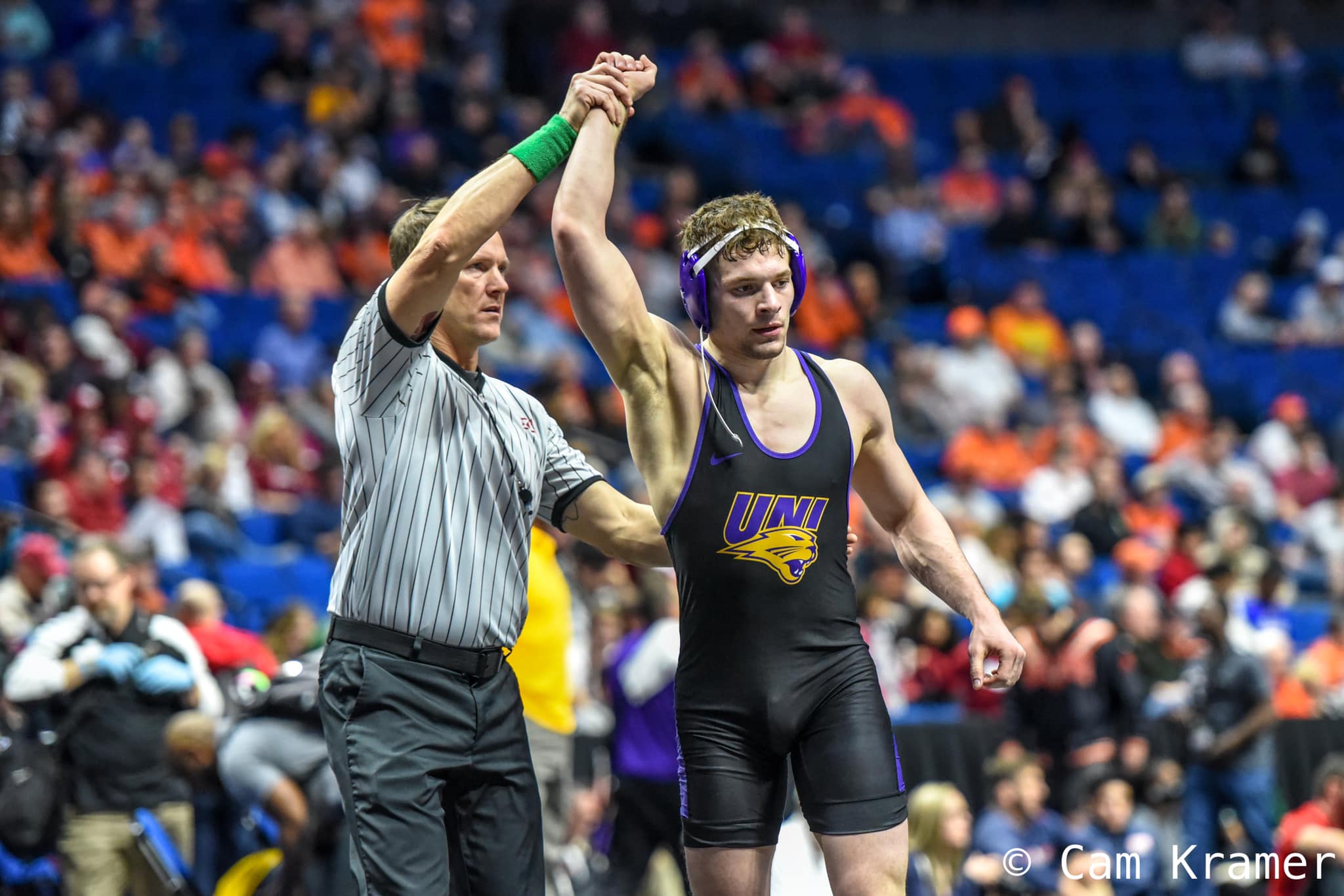 In what was one of at least two duals in the state today, the Nebraska Cornhuskers came into the West Gym and beat the Northern Iowa Panthers, 23-19. UNI falls to 0-2 on the season in duals, while Nebraska moves to 4-0.

For the Panthers the dual was highlighted by a pair of wins over number three ranked wrestlers:

In the first of the two matches where #3 went down, Bryce Steiert knocked off Mikey Labriola 2-1. Labriola earned an escape in the second period, but gave up a locked hands penalty as he was riding Steiert in the third. Nebraska challenged the call but it was upheld. Labriola went with a neutral start to reset the action, but couldn’t find any offense and Steiert got the win.

At 184 pounds the new man at the weight is Taylor Lujan, who won by major decision 15-6 over #3 Taylor Venz. Lujan, ranked fourth, got to work nearly right away, scoring a pair of takedowns and a reversal in the first period alone. Only scoring one takedown in the second, he went back to work in the third, wrapping up the victory on top after another pair of takedowns.

Jay Schwarm got things started off with a bang, eventually. He got taken down by Nebraska’s Alex Thomsen three times in the first period, trailing 6-2. But as Schwarm often does, he went to work on top to start the second, working Thomsen in to a cradle and landing a fall.

At 133 pounds Jack Skudlarczyk put another number on the left side of his record, coming back from a 2-0 first period deficit against Ridge Lovett. Like Schwarm, Skudlarczyk went to work on top, earning a four point nearfall before another takedown in the third period to win 8-4.

Nebraska earned their only upset of the night at 149 pounds, where #16 Collin Purinton closed out his match against #5 Max Thomsen in sudden victory with a takedown. The pair wrestled to a 7-7 tie at the end of regulation, with Purinton getting the winning takedown on an outside single leg. It was the only rematch of the UNI-Nebraska dual from last year, a 10-4 win for Thomsen.

Michael Blockhus lost in his West Gym debut to two-time All-American Chad Red, 18-0. Red hit a cement mixer in the opening seconds of the match, and Blockhus fought out of that, but the Husker’s offense was too good.

Nebraska’s Peyton Robb won by fall over Keaton Geerts and 157 pounds, while #6 Eric Schultz won by tech fall against Noah Glaser at 197.

UNI is next in action in a couple weeks out in Las Vegas, at the Cliff Keen Invitational, before returning home for the UNI Open on December 15th.