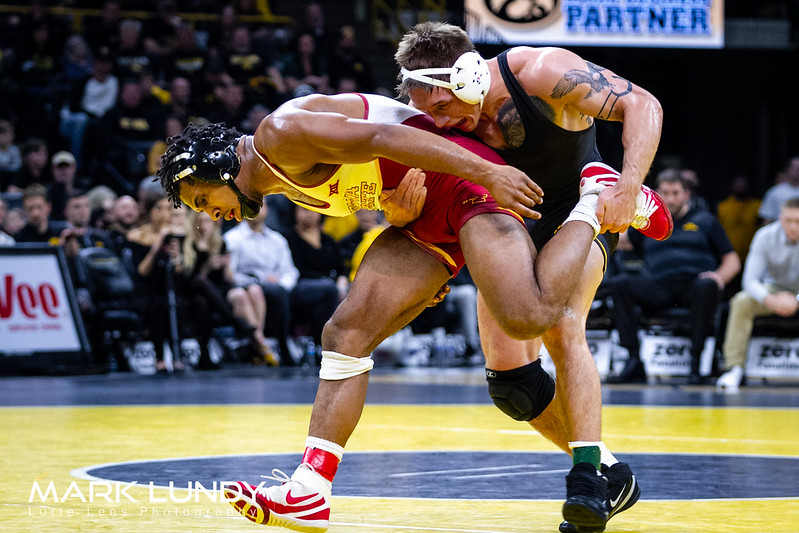 It’s one of the biggest wrestling weekends in the state of Iowa – Cy-Hawk week. The second ranked Iowa Hawkeyes will hit the road, traveling to Ames, Iowa for their meeting with Iowa State in search of their 16th straight win over their instate rivals. The Cyclones will look to buck that trend hoping home mat advantage will be in their favor as they look to upset in terms of both trend and rankings.

While Iowa holds the current streak, Iowa State still holds a large advantage in Ames holding 26-11-1 record at home. Last year the team nearly pulled it off the upset after the Hawks looked to be marginal favorites coming into the dual.

The rivalry has always been a heated and competitive, but the spark was rekindled in 2018 when the Cyclones hired former Iowa alum Kevin Dresser to lead the program. Dresser promptly hired three former Iowa wrestlers to fill out his staff to add fuel to the fire.

In their first meeting with Dresser at the head Iowa won handily, with their only loss in the dual a forfeit. A move the head Cyclone labeled as “chicken blank”. Then in 2019 the Cyclones won several swing matches to put the dual within striking distance, before Iowa’s Sam Stoll shut the door on the Cyclones’s chances.

This year’s dual has all the makings of excitement heading into the dual. Both teams appear to be still in the process of settling their final lineup for the season, with the Cyclones possibly a little bit closer to their final product than the Hawkeyes.

Starting off traditionally at the lightest weight (though we should note the last time these two teams met they drew a starting weight) we have a rematch from last year’s dual. In that match we saw Iowa’s Spencer Lee storm out to a 10-0 lead before losing steam and seeing Alex Mackall close the margin to a 13-4 final score.

In Lee’s match against Chattanooga we saw a similar match where the two-time defending NCAA champion charge to an early lead only to fail to put the match firmly away. Lee still managed a bonus win his last time out and we will see if his last result was related to his first weigh in of the season or if he has yet to get his seven minute lungs established. On the other side Mackall is coming off a 10-3 victory against Bucknell’s Brandon Seidman.

Where things take an odd turn is at 133 where last week’s dual starters looked wholly different than most were predicting in the preseason. For Iowa State its the fact that returning starter Austin Gomez is still working his way down to weight. Coach Dresser’s comments indicated Gomez would not wrestle at 133 until the Cliff Keen in December. In his stead former NJCAA champion Todd Small has been severing as the team starter.

For Iowa they saw their 2019 starter compete at 141 vs Chattanooga and Gavin Teasdale, who won an instrasquad match over teammate Paul Glynn, competed at the Luther Open instead. That led to Glynn starting (and getting a win) against Chattanooga, but leaves us with more questions than answers on what to expect for an Iowa starter this weekend.

The 133 match will likely favor the Hawkeye regardless of which of the three options they put on the mat, though Small will likely be able to keep the match within reach if the starter is Teasdale or Glynn.

Hear more on this dual preview in our Potentially Dangerous podcast:

Where Iowa could benefit from leaving DeSanto up at 141 is they can nullify the impact of Ian Parker, who was victorious in last year’s dual in his match against Max Murin. DeSanto looked brilliant in his match against Chattanooga and according to Brands he weighed in well under the 141 scratch weight.

Parker is a strong rider so whether DeSanto is staying up at 141 or even if his plan is to descend back to 133 how he handles Parker will be a good measuring stick.

The second rematch from last year will occur at 149 where Iowa’s Pat Lugo will meet ISU’s Jarrett Degen. The Cyclone is 2-0 against his instate counterpart winning in both last year’s dual and in the NCAA’s seventh place match.

If there is a match to circle its the 157-pound bout between Kaleb Young and David Carr. Entering the dual Young is ranked #2 and considered a title contender while Iowa State’s Carr may not have the same high ranking, but many are still viewing him as a wrestler with finalist potential. This has the makings of a fantastic match of contrasting styles with Carr having impeccable technique for a young wrestler, while Young’s strength being a difficult obstacle for Carr to have to overcome.

Iowa will be a large favorite at 165 in the bout between Alex Marinelli and Chase Straw. This will be the third weight class that Straw has appeared at in the Cy-Hawk rivalry and potentially his fourth different opponent. He competed at 149 pounds as a freshman wrestling Brandon Sorensen, as a sophomore and junior he competed at 157 facing Michael Kemerer and Kaleb Young, and now at 165 pounds he will face Marinelli.

In his return to action Iowa’s All-American Kemerer looked every bit explosive going back to his days at 157, earning a 20-0 technical fall in his return to action. He will face a much stiffer test this weekend with Iowa State’s Marcus Coleman, though the rankings still favor Iowa.

Coleman looked strong in his last outing earning a second period fall in his match against Bucknell.

One of the more anticipated matches in the preseason would have been a meeting between Sammy Colbray and Cash Wilcke, and while that match could still potentially happen, it was still a surprise to see the Hawks send Nelson Brands to the mat (who admittedly weighed in at 176.5) against Chattanooga.

Last year Colbray managed to best Wilcke, 7-6. This will be a key match the Cyclones have circled to pull of this upset.

Former West Des Moines-Valley prep Joel Shapiro has emerged as Iowa State’s starter at 197 over Francis Duggan. Shapiro fell to Drew Phipps 4-0 in his dual debut and will be facing an uphill battle against the #4 ranked Jacob Warner.

In the final bout we should see a meeting between Iowa State sophomore Gannon Gremmel against Hawkeye freshman Tony Cassioppi. In his dual debut Cassioppi delevered on his promise of chasing Iowa’s all-time pin record scoring a first period fall. In their only college meeting Cassioppi scored a fall over Gremmel at the Lindenwood Open.

Gremmel is coming of a DQ performance against Bucknell after receiving two unsportsmanlike penalties.