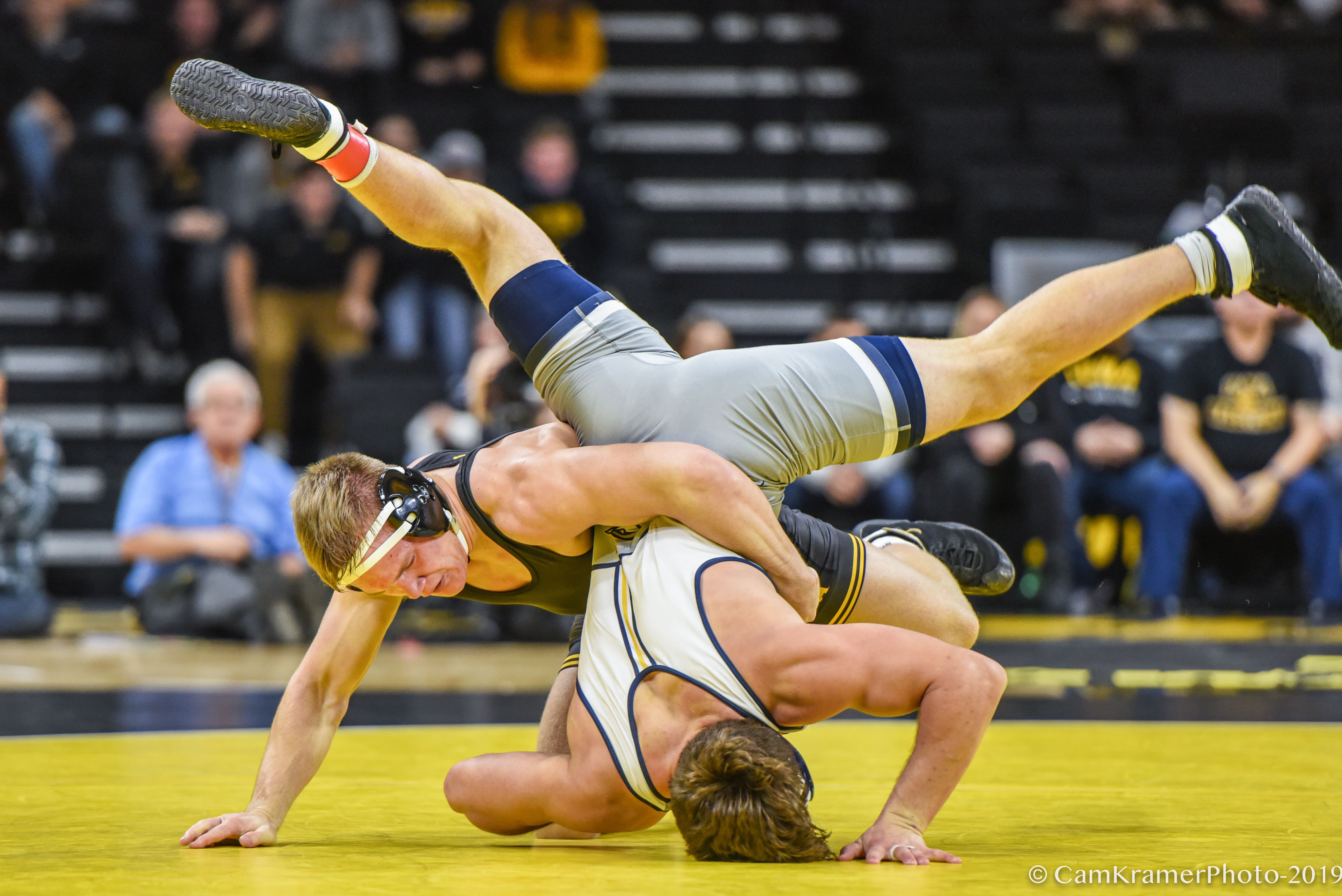 The Iowa Hawkeyes first competition is officially in the books as the team logged a 39-0 over Tennessee-Chattanooga inside Carver-Hawkeye Arena. This lineup returns a total of seven All-Americans and all seven of those wrestlers managed a victory over their Moc opponent.

Of the three weights where Iowa does not feature a returning All-American we instead saw two wrestlers make their Carver-Hawkeye debut, including a surprise start by Nelson Brands at 184 pounds.

Kicking things off at 125 pounds was Iowa’s two-time NCAA Champion Spencer Lee, taking on Fabian Gutierrez. Lee opened the season with a quick takedown and four point nearfall turn to take an early six point lead. Lee continued his high pace building a 12-3 lead in the second. Gutierrez did manage a takedown in the second period to cut the match to 12-5. Lee tacked on four more points to take the major 16-5.

Coming into the dual one of the bigger questions was what was Iowa going to do at 133 pounds with Tom Brands preseason press conference announcing for fans to expect to see Gavin Teasdale on the mat for November 17th, but after the redshirt freshman competed at the Luther Open yesterday that cast some doubt on whether or not the starter would indeed by Teasdale, or if former starter Paul Glynn would be on the mat.

Brands opted to go with the veteran, Glynn who gave up three first period takedowns to Wade Cummings before find his offense late in the period to cut the match to 6-5 in favor of the Moc wrestler. An escape and takedown by Glynn gave him the lead for the first time late in the second period up 8-6. Glynn managed to work a go behind from a front headlock that he transitioned into a double leg finish.

In the third Cummings took a shot and got in on Glynn, but the Hawkeye was able to stuff the head an go behind to go up 10-7. The match ended 11-7 after riding time was added for Glynn.

A little less surprising was seeing Austin DeSanto up at 141 pounds. At the team’s intrasquad matches DeSanto wrestled up at 141 pounds against Aaron Meyer signaling the former All-American may be sliding up in the lineup. DeSanto didn’t miss a beat up at the new weight as he blitzed out to a 14-4 lead after the first. He then finished things off in the second with a takedown and four more nearfall to win by technical fall, 21-4 against Aidan Murphy.

Consistency returned in the middle of Iowa’s lineup. Returning All-Americans Pat Lugo, Kaleb Young, and Alex Marinelli all returned to their starting roles from the previous season and rolled in their individual matches. At 149 Lugo came out on top of a workman like 9-4 decision over Tanner Smith. Young followed with a major decision at 157 pounds against George Carpenter, 16-6. Marinelli defeated Drew Nicholson by decision 9-4 on the strength of three takedowns and over four minutes of riding time.

After almost 20 months since his last time out on the mat in front of his home crowd, Michael Kemerer gave the fans in side Carver a trip down memory lane, defeating Hunter Fortner in dominant fashion, 20-0. It goes without saying racking up 20 points of offense while not surrendering any is about as dominant as it gets, but we’ll drive the point home.

As previously mentioned the surprise start of the day went to Nelson Brands, who made his debut at 184 pounds against Matthew Waddell. Last season as a redshirt Brands competed at 165 pounds, so the move to 184 bumped the freshman two weight classes to take on Waddell, who coming in was inarguably considered the Mocs best wrestler.

There was no deer in the headlights look for Brands as he quickly opened the match by taking Waddell down, and picked up another later on in the first to lead the match 4-2. The duo traded escapes in the second and third period, before Brands pulled away in the match with a takedown. After riding time the final result was 8-4.

Sophomore Jacob Warner took the lead just seconds into his match with Rodney Jones at 197 after a hands to the face penalty by Jones. Warner added a takedown in the first to lead 3-1. In the second Warner added to his lead with an escape and stalling penalty point against Jones. In the final period Jones caught Warner flat footed for a takedown, but the Hawkeye still came out on top 5-4.

The second wrestler to make his varsity debut in Carver was heavyweight standout Tony Cassioppi who quickly got a takedown and proceed to get to work on top in his match against Grayson Walthall. Just over midway through the first period Cassioppi stuck Walthall for the fall.

Up next will be an instate battle for Iowa as they head to Ames for their dual against Kevin Dress and the Iowa State Cyclones. The Dual takes place next Sunday at 2:00 PM.

One thought on “Hawkeyes Blank Chattanooga in Season Opener”