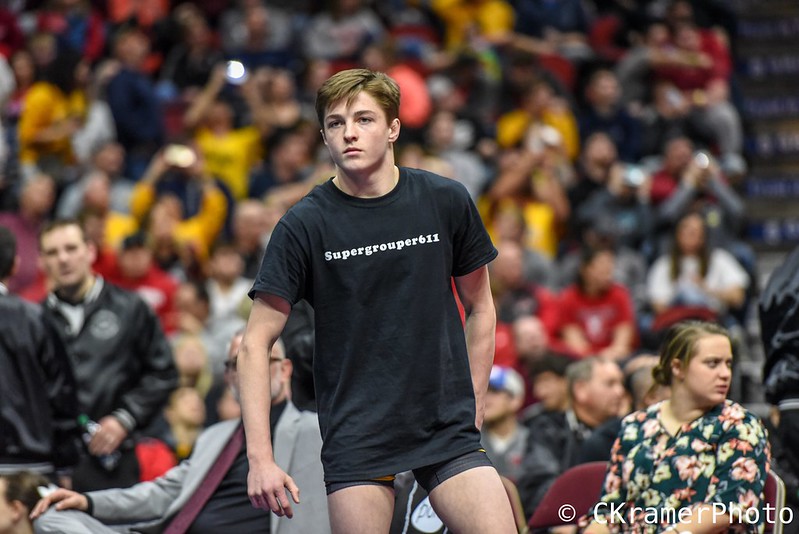 This week one of the nation’s top wrestlers in the class of 2021, Caleb Rathjen appeared on our Potentially Dangerous podcast to give us a glance inside his recruitment as some of the top programs in the country attempt to woo the Ankeny prep in hopes of landing his verbal commitment. With two more high school season left to go there is still plenty of time for Rathjen to rack up more accolades, but midway through his high school career the former national freestyle finalist already has a number of top programs knocking down his door.

Today the NCAA allows recruits to take up to five official visits, and by the end of this month Rathjen will have completed all five trips with an additional unofficial the following week. The three programs Rathjen has already visited include blue chip Iowa State in September, Big 12 program South Dakota State, and Purdue this past weekend. His next slate of visits include Iowa, North Carolina, and UNI.

In recapping his Iowa State visit Rathjen said his overall visit was positive. Through the summer freestyle circuit Rathjen has been able to form a relationship with current Iowa State assistant coaches Brent Metcalf and Derek St. John.

Listen to our interview with Caleb on the audio player below:

When asked which Iowa State wrestlers would make for appealing practice partners or teammates Rathjen had two in mind that seemed to immediately stand out.

“Guys like Austin (Gomez) and David (Carr). Those two really stand out. Not only the success in folkstyle and at the high school level, but what they have done in freestyle too. Austin made the Junior World Team last year. He didn’t end up wrestling. And then David winning a Junior World title this year. I love freestyle, that and folkstyle go back and forth on what’s my favorite style. I really enjoy freestyle. Those are two guys I would like to really be around.”

While Rathjen is definitely one of the state’s top recruits he shares the spotlight with another Iowa prep, Fort Dodge’s Drake Ayala. The two were on the Iowa State visit together, and are scheduled to visit both Iowa and North Carolina on the same weekends. While the two have formed a strong bond over the years competing for Team Iowa and traveling to the same universities for visits, Rathjen doesn’t think that will lead to the duo being a packaged deal.

“I don’t know if we will.” Rathjen said of committing to the same school as Ayala, who is considered one of the nation’s top lightweight prospects in the class of 2021. “I am guessing we will both try and figure out what we like the best, what we think fits the best. We’re definitely not planning to go to the same place.”

This weekend Rathjen will visit another instate school in the University of Iowa a program that Rathjen has already visited unofficially a couple of times.

Following his visit to Iowa Rathjen will hit the road to take his aforementioned visit to North Carolina on the weekend of October 26th. One fact that was not mentioned in the podcast was that Rathjen will then visit Northern Iowa the first weekend in November.

Rathjen added that he will compete at 138 pounds this coming season, which would ideally project him as a 149-pound recruit, at least at the start of his college career. The potentially to grow into a 157-pound prospect remains a possibility.