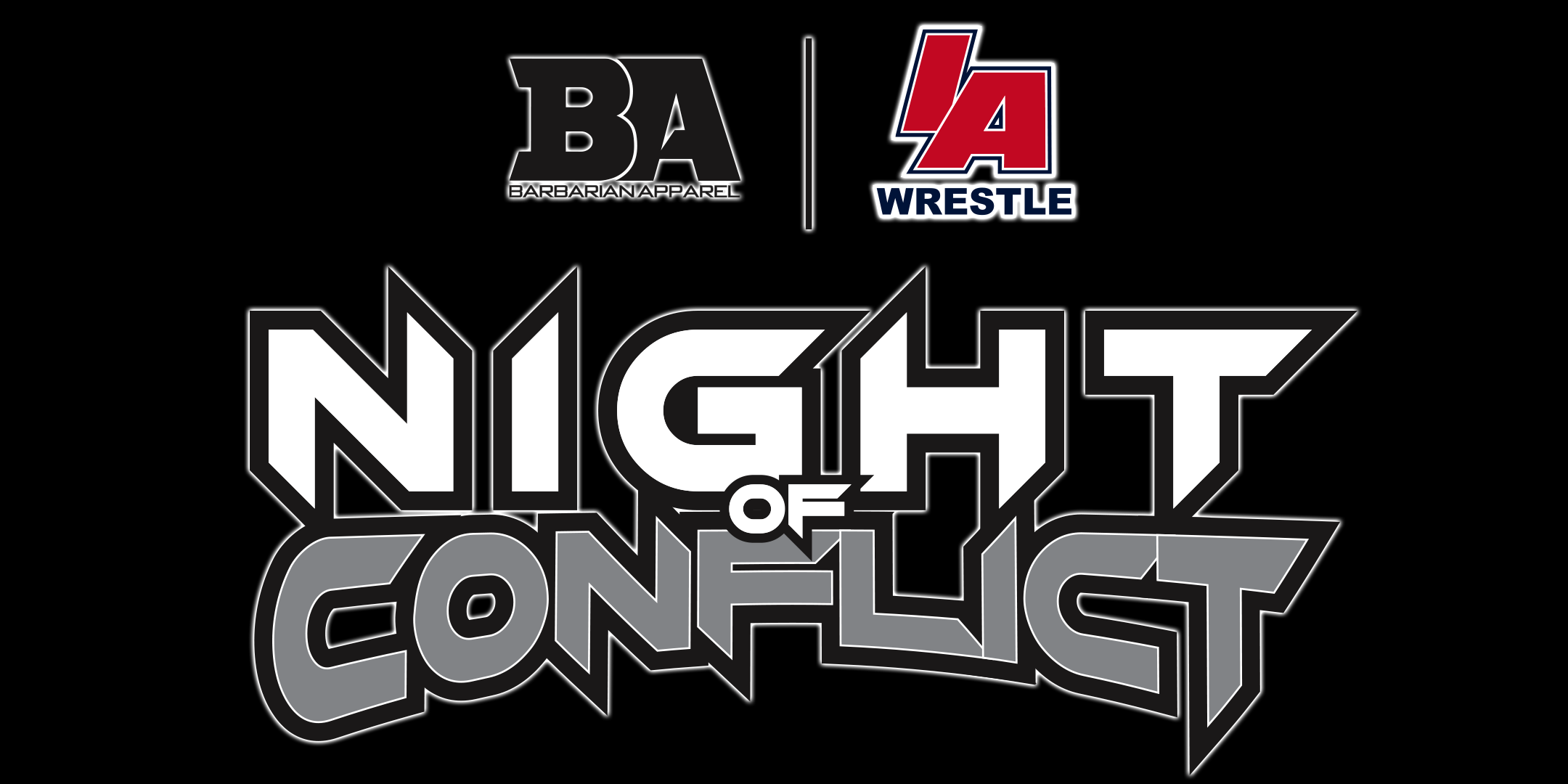 IAwrestle is pleased to announce that Night of Conflict will make its return as one of our premier events Saturday, October 19th. Night of Conflict will take place at the Five Sullivan Brothers Convention Center in Waterloo, IA and will feature some of the state’s top talent. The event doors open at 5:30 PM with first whistle to blow at 6:30 PM.

Night of Conflict will run alongside Iron Elite’s Fall Nationals that takes place October 19th and 20th. Iron Elite Fall Nationals is the only place to be on Oct. 19 (grades 7-12 boys and girls divisions) and Oct.20 (grades K-6 boys and girls divisions). Saturday’s tournament is expected to be completed by 5:30 PM with Night of Conflict kicking off at 6:30 PM.

A couple of two-time state place winners are now set to do battle with Briar Reisz of Logan Magnolia taking on Jalen Schropp of Williamsburg. Reisz enters his junior season with a career record of 106-6 and two state runner-up finishes. Schropp was a state qualifier as a freshman, placed fifth as a Sophomore, and third as a Junior last season. He also placed eighth at the 2019 postseason national tournament.

Avila was a 2019 1A state champion for Lisbon during his freshman campaign and followed that up by becoming a Fargo Cadet Greco All-American this summer. He will face two-time 2A state champion Matthew Lewis of Centerville who has a career record of 87-3. Both wrestlers are on a path to become four-time high school state champions and this is sure to be a fun match!

Genobana has reached the finals of the state tournament in each of his first two years of high school and is a two-time runner up in 2A. He carries a career record of 70-6. Lewis is a two-time state place winner finishing third in 2018 and sixth in 2019. He also placed fourth at the 2019 USA wrestling Postseason Nationals. He has an impressive high school record of 137-13.

2018 state champion, Jack Thomsen enters the event as a three-time state place-winner and stands at the top of our uncommitted seniors in the latest IAwrestle Fab50. Nick Hamilton enters his sophomore season with high accolades after being a state runner-up as a freshman and earning double Cadet All-American status in Fargo this summer placing fifth in freestyle and fourth in Greco-Roman.

Wyatt Voelker is another highly touted sophomore who placed fourth at state as a freshman before becoming a double Cadet All-American, placing sixth in freestyle and fourth in Greco-Roman. Mooberry is a talented and very dangerous junior who placed sixth at the state tournament last season and had a lot of big wins. This is a rematch of a great quarterfinal battle at the state tournament that Voelker won 5-4.

These are two very promising freshman that don’t have any high school accolades, but we expect to make a big splash on the class 1A 106-pound scene this upcoming season. Both are AAU state place winners with impressive youth resumes.

Hagen Heistand had a terrific freshman season in 2018 placing third in class 1A and finishing with a 51-3 record. Austin Kegley is a senior who also placed third in class 3A in 2019. Kegley also placed eighth as a sophomore and has made a name for himself on the freestyle/Greco-Roman scene in Iowa with some big moves and nice wins.

Braden Graff adds to the list of terrific sophomores in the event after placing third in class 2A and posting 50 wins in 2019. He has since transferred to West Sioux and will get a taste of some of his top competition in class 1A this upcoming season with Huston. Huston placed third in class 1A with a 46-2 record. Huston also posted an impressive victory over state finalist, Jace Rhodes, at the War at West Gym in March.

If you don’t know the name Justin McCunn you should get to know it. He is a senior on the rise, who placed eight as sophomore and second as a junior. Ashton Barker was one of the big stories at state this past season when he became the first place-winner in Iowa City Liberty school history after placing third. He has since transferred into Iowa City West and enters his junior season with high expectations.

Jack Gaukel comes into his junior season as one of Iowa’s best wrestlers in the class of 2021. He is a two-time state runner-up and has a high school record of 94-10. Yant, a senior, leads the returning Class 3A State Champions Waverly-Shell Rock as a two-time state place-winner after finishing fourth last season for the Go-Hawks.

Sophomore Stevie Barnes is yet another highly touted underclassmen from Underwood. Barnes was a state runner-up in class 1A and followed that up by placing third in greco at Cadet Nationals. Whitinger enters his senior season as a two-time state place-winner after finishing fourth as a sophomore and junior.

In addition to his achievements on the mat athletically, Yagla’s background in officiating includes 24 years as an NCAA official working the NCAA Division I National tournament from 1996-2007. He retired in 2007 and is presently employed at Kirk Gross Company in Waterloo, Iowa as Director of Marketing & Public Relations.

Jim Miller was NCAA Division II champion at 134 pounds for the University of Northern Iowa in 1974 and ’75 and placed second and fourth in Division I those same years.

After coaching at the high school level, Miller returned to UNI as the top assistant coach from 1983-91 when he became head coach at Wartburg. He had a career record of 413-37-2, winning 10 NCAA Division III team championships, 21 consecutive Iowa Conference championships and seven National Wrestling Coaches Association National Duals championships before stepping down after the 2013 season. He coached 37 individual national champions, 147 All-Americans and 72 NWCA Academic All-Americans at Wartburg.

Miller wrestled at East Waterloo High School and finished third in the state in 1971 and had a career record of 43-11.