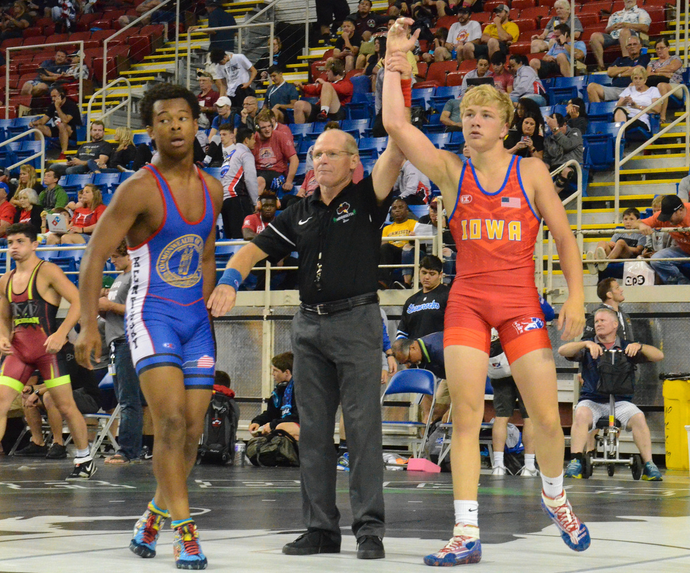 We wrap up our 2019 National Duals preview with the Junior team, who will head to Tulsa, Oklahoma to compete for a national title. This year’s team has expierenced drastic turnover from the 2018 group, with the only returning wrestler being Spencer Trenary at heavyweight, though Daniel Kimball (126) competed on Iowa 2017 Junior team.

Of while turnover means we will be seeing a lot of new faces take their first crack at competing at the Junior level, most of the new faces will be making the jump from the Cadet team, which brought home top eight finishes in both styles last year.

Returning All-Americans at the Junior level for this team includes Trenary, Kimball, and Cade DeVos (160).

All told this group boasts 20 individual state titles at this spring’s Junior freestyle and Greco-Roman state championships, with seven wrestlers bringing home gold in both styles.

Several wrestlers went on to represent Iowa at various regional tournaments throughout the country and four were lucky enough to win Regional titles for their state. The Northern Plains trio of O’Brien, Ayala, and DeVos were all dual champions, winning titles in both freestyle and Greco-Roman. Trenary captured the Western Regional Freestyle title in April, and Mooberry was a freestyle runner-up at the Southern Plains Regional.

This team will be looking to improve off a pair of top ten finishes from a year ago. Last summer the Greco-Roman team managed a sixth place finish, while the freestyle team came in 10th. Fans can catch the action live on Trackwrestling next week June 18th through the 22nd.