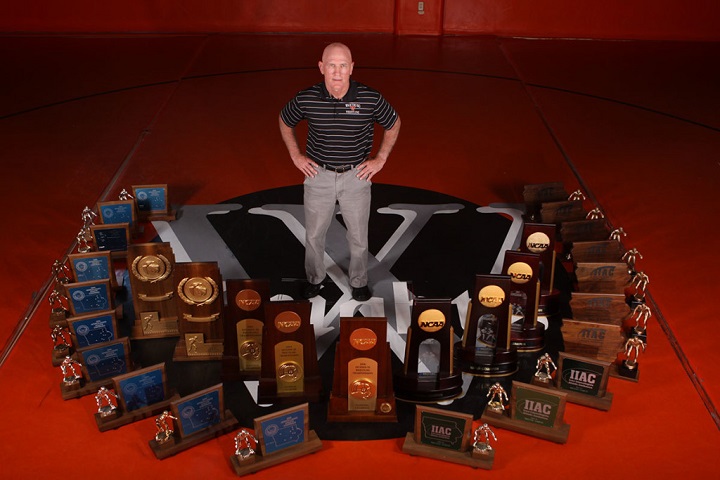 Miller will be responsible for the museum’s daily operations, including the preservation of artifacts, programming, planning, communications and fundraising, while also overseeing the Dan Gable Learning Center, a wrestling training facility inside the museum. He replaces Kyle Klingman, who resigned in April to accept a position with Trackwrestling.

“We are elated to have someone with Jim Miller’s background leading the Dan Gable Museum for the National Wrestling Hall of Fame,” said Lee Roy Smith, Executive Director, National Wrestling Hall of Fame. “He has a keen knowledge of the sport’s heritage while also contributing significantly to its history as a competitor, coach and motivational speaker. I am confident that he will advance our mission and the impact that the museum and its programs and services will have upon wrestling in Iowa and across the nation.”

“I am looking forward to getting started as the Director of the National Wrestling Hall of Fame Dan Gable Museum,” said Miller, who will begin his duties on July 1. “I see this next step in my life journey as an awesome and unique opportunity to get back involved with a sport that I love while working with Dan Gable and many others to advance wrestling right here in the Cedar Valley and in my hometown of Waterloo, Iowa.”

“The National Wrestling Hall of Fame Dan Gable Museum is newly renovated and having Jim Miller as its new director adds even more excitement to its overall potential,” said Dan Gable, the museum’s namesake and a Distinguished Member inducted into the Hall of Fame in 1980. “I am looking forward to working with a wrestling great and many others to enhance the great sport of wrestling.”

Miller wrestled at East Waterloo High School and finished third in the state in 1971 and had a career record of 43-11. He attended the University of Northern Iowa where he had a career record of 128-22 while winning NCAA Division II championships in 1974 and 1975 and finishing second and fourth, respectively, in Division I the same year. Miller competed in the East/West All-Star meet two times and was a National Freestyle runner-up in 1976.

After coaching at the high school level, Miller returned to UNI as the top assistant coach from 1983-91 when he became head coach at Wartburg. He had a career record of 413-37-2, winning 10 NCAA Division III team championships, 21 consecutive Iowa Conference championships and seven National Wrestling Coaches Association National Duals championships before stepping down after the 2013 season. He coached 37 individual national champions, 147 All-Americans and 72 NWCA Academic All-Americans at Wartburg.

“I want to thank Wartburg College for the past 28 years,” said Miller, who has been Emeritus Coach and also has been teaching at Wartburg for the last six years. “My 22 years as head coach of the wrestling program was the highlight of my 37-year coaching career and I will be forever grateful.”