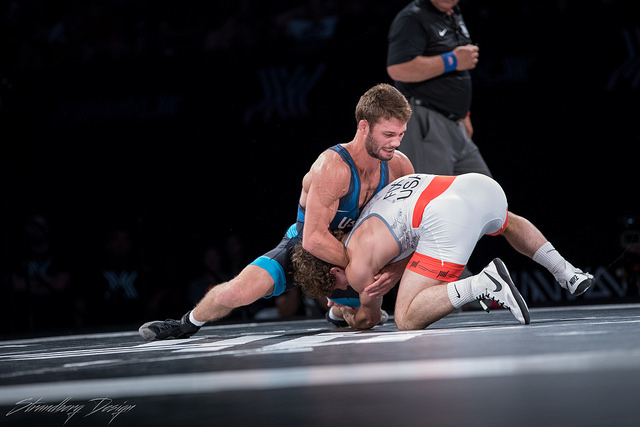 Three wrestlers from the Iowa City based Hawkeye Wrestling Club have advanced to the finals of the World Team Trials tournament in Raleigh, North Carolina. Reaching the finals for the HWC were Thomas Gilman, Lauren Louive, and Michaela Beck. The trio joins former Cyclone All-Americans Pat Downey and Kyven Gadson, who both qualified for the finals by way of winning last month’s US Open in Las Vegas. The wrestlers will compete in a best-of-three finals with the winner of this match advancing to the Final X event. Final X if the last stage of the qualification process to make USA Wrestling Senior World Team.

Reaching the finals at 57 kg was Gilman, who will face off with the familiar Darian Cruz of Lehigh Valley Wrestling Club. Cruz famously upset Gilman his senior at the NCAA tournament, who was the favorite to win the NCAA title that spring. Gilman would later get his revenge on Cruz that summer at the World Team Trials and eventually went on to take silver at the 2017 World Championships. The winner of this bout advances to Final X where they will take on Daton Fix.

At 86 kg we will see a rematch of last month’s US Open final as Nick Heflin successfully navigated the field to earn his rematch with former Iowa State All-American Pat Downey in the finals. Downey won their previous meeting 10-4 in Vegas and the winner will advance to Final X to face reigning World Champion David Taylor.

Ty Walz placed fourth at last month’s US Open, but tomorrow he will try and knock off Kyven Gadson in the finals at 97 kg. The former Cyclone NCAA champion has been as solid as they come domestically outside of his run ins with Kyle Snyder. Still Walz is a seasoned wrestler who represented the U.S. at the U23 level and could prove to be a tough match for Gadson.

That leaves the final matchup, which will be a meeting between two HWC members in Louive and Beck. Beck is looking to advance to Final X just a week following her success in Texas where she made Team USA Junior World Team at 59 kg.

Additionally we will see another HWC wrestler, Brandon Sorensen compete for his shot at a third place at 70 kg, taking on Jason Chamberlain in his final bout. In the event that Sorensen wins his third place match he would have the opportunity to wrestle to make the U.S. National Team, provided James Green (the wrestler that beat Sorensen) defeat Anthony Ashnault in the finals.