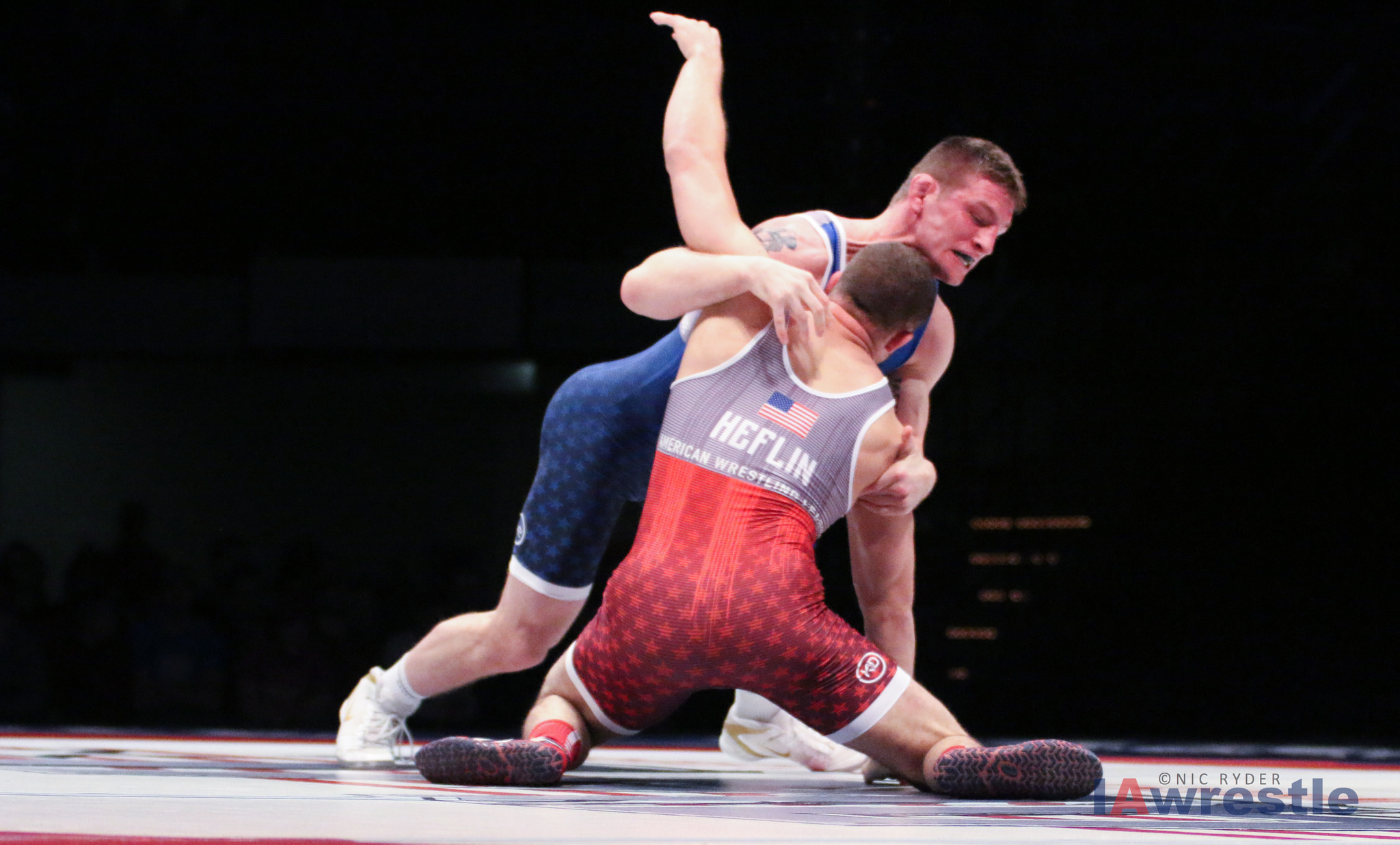 The 2019 US Open is upon us with action beginning on Friday in Las Vegas for multiple age groups (Senior and Juniors) in addition to all three styles taking the mat (Greco-Roman, freestyle, and Women’s freestyle).

The US Open has involved in significance over the last few years as the winner of the Open puts him or herself in a prime position to make the World Team for the United States. Seven Americans won a World medal at the 2018 World Championships, which means they are guaranteed a spot in the best-of-three finals in the competition to retain their position.

For the three weights that did not win a World medal 57, 65, and 70 kg the winner of the US Open can claim that best-of-three finals slot. The rest of the field will advance to the next leg of the World Team qualification process, which is the World Team Trials (held in North Carolina). The top seven at the Open advance to the Trials.

We will go into more detail under each weight below, previewing wrestlers who have an Iowa tie.

The biggest favorite in the field of course is the returning Team member Thomas Gilman, who will currently competes for the Hawkeye Wrestling Club. Gilman competed on the 2017 and 2018 World Teams, and was second in the World in 2017. This weekend he will need to navigate a loaded field with his chief contender expected to be Daton Fix, who was his Final X opponent in 2018.

Other notable wrestlers on Gilman’s side of the bracket includes Nathan Tomasello, who was Gilman’s rival on the Junior circuit and in college. In the quarterfinals he could match up with Joshua Rodriguez, who is coming off a gold medal performance at the Pan American Championships.

Also of note in this field is Jesse Delgado, who received the #10 pre-seed. Delgado spent a season Iowa City with the Hawkeye Wrestling Club.

Next is the 61 kg weight, which is the weight that features bronze medalist Colon, who is already sitting in Final X. That means the winner of the US Open bracket will not advance to Final X (as is the case at 57 kg) but instead they will receive an automatic bye to the best-of-three finals at the World Team Trials.

Two wrestlers with Iowa ties are featured in this bracket, and both have a long shared history with one another. Drawing the #4 and #5 pre-seeds were Cory Clark and Tony Ramos respectively both former standouts for the Hawkeyes.

Both wrestlers were NCAA champions at 133 pounds during their college career, and once upon a time Clark even lived with Ramos in college. Ramos went on to have a successful freestyle career making two World Teams (2014/2015) and has made the national team for five years running, all at 57 kg.

Clark on the other hand is in the beginning of his freestyle career, but he does own a head-to-head win over Ramos dating back last November at the AWL event that was held in Cedar Rapids. Clark won the meeting 8-0.

Based off their pre-seeds these two are slated to meet in the quarterfinals, and with a win they would then advance to face the weight’s top seeded wrestler, Nico Megaludis.

65 kg is another weight where Final X is currently unoccupied which makes the race for this weight’s US Open title much more dramatic. In the field with an Iowa ties is Sargent Bluff-Luton graduate Colton McCrystal, who was a gold medalist last weekend for Team USA at the Pan American Championships in Buenos Ares. The other ties are former Grand View standout Brandon Wright and former HWC competitor Nick Dardanes is also registered.

The weight’s top seed is Jordan Oliver, who has never competed on a World Team, but has several National Team accolades to his credit at this weight. The other top contenders at this weight are 2017 World rep Zain Retherford, 2018 Final X runner-up Joey McKenna, and 2016 Olympian Frank Molinaro. Overall the top of this field is loaded with talent.

That will make the path for all three wrestlers with an Iowa tie very difficult as the highest seeded wrestler is McCrystal, though that would put him in the same quarterfinal as the top seed. Wright was a breakout sensation at this tournament two years ago at 61 kg and he will now look to become a factor at a much more difficult weight.

This is the final weight where the US Open Champion has the opportunity to advance straight to Final X. For the past four years this weight has been dominated domestically by James Green, who is a two-time World medalist. Green is the bracket’s favorite entering this weekend’s Open.

The other top contenders at this weight, in order are Jason Chamberlain, HWC’s Brandon Sorensen, and Jason Nolf who round out the rest of the top four pre-seeds. The anticipated semifinal meetings between Green-Nolf and Chamberlain-Sorensen should be worth the price of admission alone.

Since entering the freestyle scene last year Sorensen is off to a strong start on the Senior circuit. He’s won medals at all five of his International appearances including gold at the Canada Cup and Cerro Pelado.

He has already squared off with Green on one other occasion, which resulted in a 10-0 victory for the World Team member at AWL last November.

This weight has been owned by Jordan Burroughs, who sits in Final X. The weight’s favorite if two-time NCAA champion Isaiah Martinez and the only Iowa wrestler with an Iowa tie to receive a pre-seed is #8 Jared Frayer.

Frayer spent some time in Iowa City on the Hawkeye coaching staff, and was a 2012 Olympian. He has since been heavily involved in coaching since the 2012 cycle.

This weight only had three wrestlers qualify for a pre-seed due to a couple of reasons. First and foremost this is a non-Olympic weight, which means it will not be contested in the 2020 Games held in Tokyo, so its not uncommon to see a mass exodus of wrestlers from this weight in the year prior to an Olympic year. Second sitting atop the weight in Final X is Kyle Dake, potentially one of America’s most dynamic wrestlers.

There are no wrestlers with an Iowa tie that received a pre-seed.

The are three weights that feature a wrestler with an Iowa tie receiving the top pre-seed. The first was Gilman at 57 kg. The second is featured at 86 kg where HWC Sammy Brooks will look to navigate a difficult weight.  Also featured in the field is former Iowa State All-American Pat Downey, who will be one of Brooks’s biggest threats for the top spot.

Already waiting in Final X is World Champion David Taylor, which means best case scenario the winner of this weight is in the best-of-three finals at next month’s Trials.

Most recently we saw Brooks compete on our World Cup team in March (which USA took third at) and his last individual performance was a gold medal at the Henri Deglane tournament in France. Brooks has plenty of freestyle experience having competed at the first ever U23 World Championships for USA. He actually defeated this weight’s second seeded wrestler Myles Martin to make the team in 2017.

Downey was seventh in this event a year ago, and won the Dave Schultz Memorial earlier this year.

There are no wrestlers with an Iowa tie at 92 kg. World Champion J’den Cox is already qualified for Final X. The one wrestler many will have an eye on this weekend is Bo Nickal who some view as a threat to knock Cox off the World Team.

The final weight that features a wrestler with an Iowa tie at the top is 97 kg where former Iowa State NCAA champion Kyven Gason will attempt to win yet another US Open title. He’s been USA’s alternate to Kyle Snyder the last two years, and is expected to once again be the top threat in Vegas.

his chief competition will come from former U23 World Team member Ty Walz, who is seeded second. His potential quarterfinal opponent will be fellow Iowa native Blaize Cabell, who is the #4 seed. Cabell was the runner-up to Walz at the Dave Schultz and finished fifth at the Cerro Pelado.