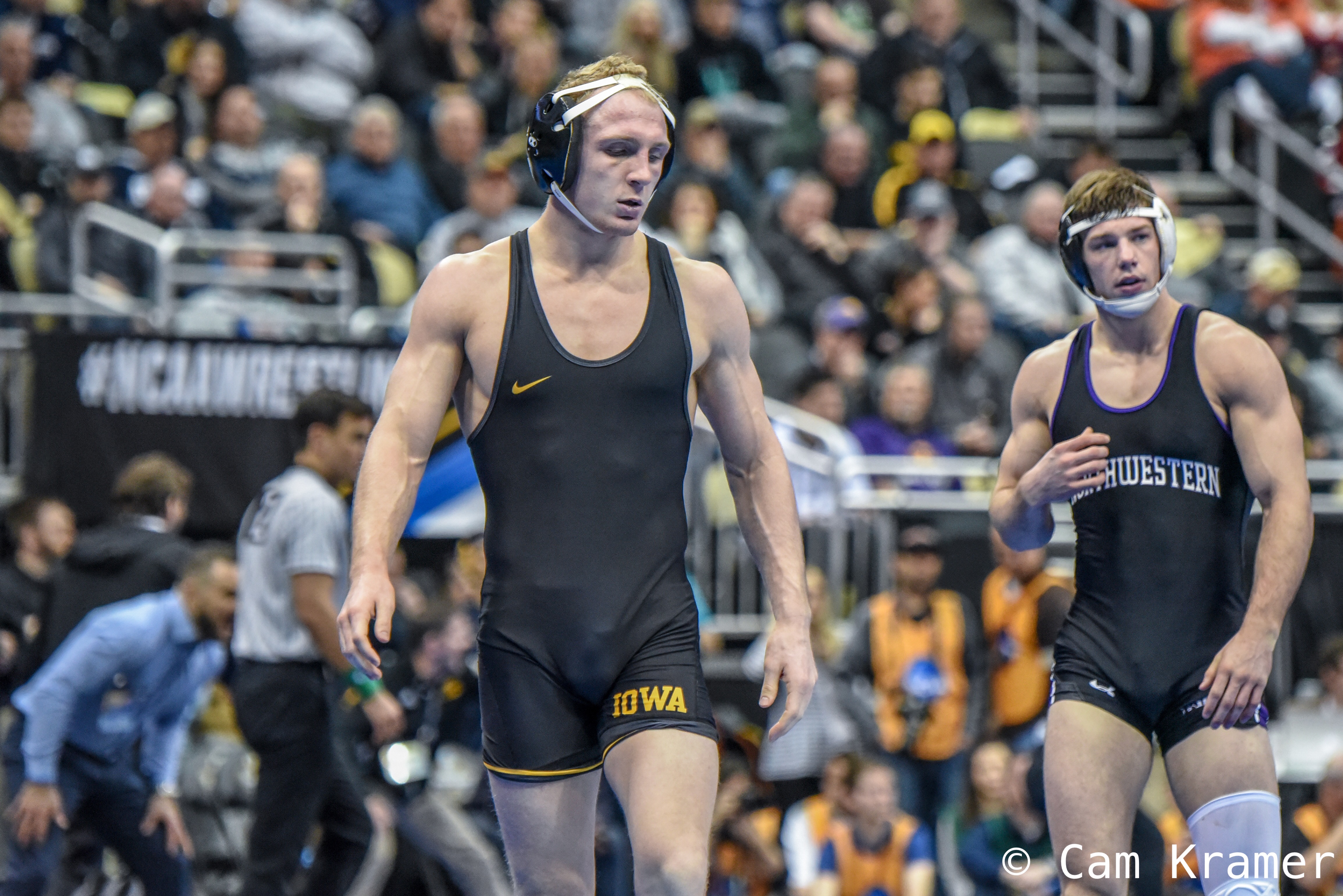 After a strong start to the tournament the Hawkeyes were tripped up in the quarterfinal round at the NCAA championships. Iowa began the tournament with 15 straight wins to being the tournament, and closed day one with a 16-2 record overall. They sent seven wrestlers to the quarterfinals, and had two additional wrestlers in the consolation bracket. Advancing with quarterfinal wins were Spencer Lee (125) and Kaleb Young (157). Both semifinalists are guaranteed a top six finish, which means they have secured All-American honors.

Dropping to the bloodround were Austin DeSanto (133), Max Murin (141), Pat Lugo (149), Alex Marinelli (165), and Sam Stoll (285).  Each wrestler that lost in the quarterfinal round still needs to win one more match to secure a podium finish.

It was all too familiar territory for Lee in the quarterfinals as he matched up against Sean Russell of Minnesota. Coming into the match Lee held a 3-0 record against Russell and had not given up a point to him in any of those meetings.

Lee built an 8-0 lead early against Russell, before surrendering a takedown. Lee was then able to score an escape and from there took Russell down and put him on his back to secure a big pinfall to earn his second career semifinals berth. The win also pushed the Hawkeyes to the front of the team standings temporarily where they led Penn State by a half point.

Tonight Lee will head to the semifinals and take on another familiar foe, Nick Piccininni of Oklahoma State. Lee carries a 1-1 record against his Cowboy opponent with the last match a loss by fall in the dual finale.

Joining Lee in tonight’s semifinal round will be Young who scored a huge upset at 157 pounds over #3 seed Ryan Deakin of Northwestern. Young scored three total takedowns in the match including two in the first period to pull out to an early lead. He then manged to score 13 seconds into sudden victory to take the match.

This result was the reverse of the earlier meeting between these two, as Deakin was the winner when the pair met in the Midlands finals. Now one win away from being a national finalist, Young will take on another Big Ten wrestler, Tyler Berger of Nebraska who is the bracket’s #2 seed.

DeSanto was unable to mount a comeback in his quarterfinal bout. Michigan’s Stevan Micic scored an escape followed by a takedown in the second period to lead 3-0. DeSanto chose neutral in the second period and forced two stalling points in his favor by wrestling a high third period pace, but ultimately fell 3-2.

DeSanto will see a familiar opponent later this evening when he takes on instate rival Austin Gomez of Iowa State for a chance to make the podium. Gomez defeated DeSanto earlier this season when the two met during the rivalry dual.

Also dropping the quarterfinals was Murin, who faced third seeded Nick Lee of Penn State. Murin was able to get into Lee’s legs a few times in the match, but was unable to convert any of his attempts into scores. He fell by the final score of 4-1 and heads to the bloodround.

Tonight Murin will continue his stretch of wrestling Big Ten wrestlers when he takes on Chad Red of Nebraska in the bloodround. He opened his tournament with Wisconsin’s Moran, followed by Carr of Illinois, before dropping his quarterfinal bout to Lee.

Lugo was unable to match his opponents offense in the bout at 149 as Micah Jordan of Ohio State came out on top 10-3 in their quarterfinal bout. Up next, will be Minnesota’s Thomas Thorn with a shot at the podium.

Top seeded Marinelli fell victim to upset in his bout against Virginia Tech’s Mikhi Lewis, who came in as the #8 seed. Marinelli initiated most of the offensive attempts in the match, but was never able to convert. Late in the match Lewis was able to score of re-short of a Marinelli attack, locking up a takedown as time expired to win.

The final Hawkeye dropping in the quarterfinals was All-American Sam Stoll, who lost 2-0 to the #4 seed Jordan Wood. Stoll surrendered a second period escape and was unable to get out from bottom in the third period, which led to Wood picking up one point for riding time.

Already on the backside of the bracket were Wilcke and Warner, who each opened their second day with victories. At 184 pounds Wilcke defeated Big Ten opponent Mason Reinhardt by major decision, 8-0 in his first bout. Similarly, Warner also scored a major, his by a score of 9-1 Josh Roetman of Navy.