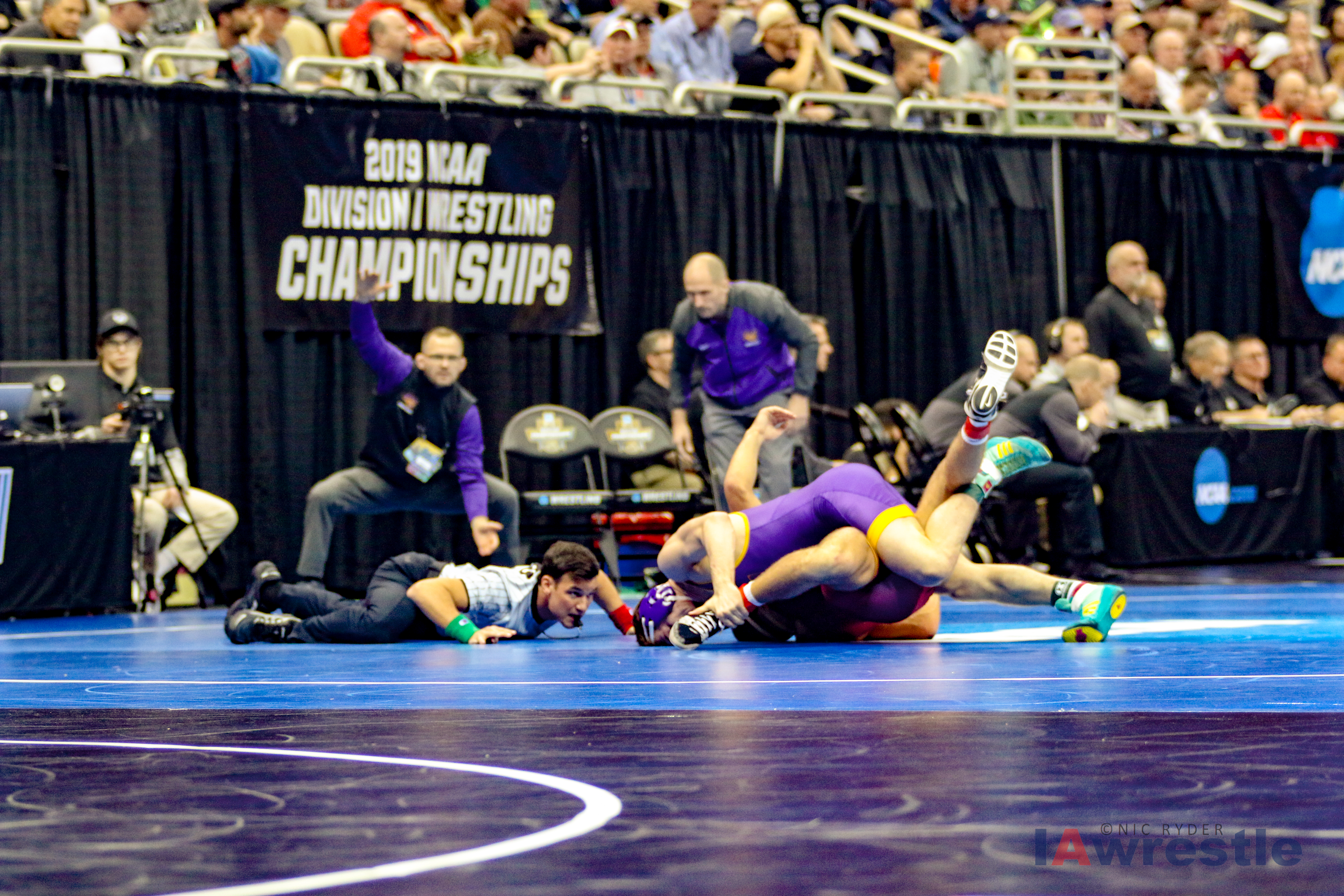 After day one of the NCAA wrestling championships, the Northern Iowa Panthers have three men in the quarterfinals and have all six qualifiers in the tournament. Bryce Steiert, Taylor Lujan, and Drew Foster all made the  The Panthers were in the top ten for most of the afternoon and ended the day with 15.5 points, good enough for 10th place.

“Really important that nobody’s tournament is done right now,” UNI head coach Doug Schwab said. “I talked about doing a lot of damage with six guys, got three on the back side and what matters right now is getting ready for the next match in front of them. I like how our guys are competing.”

“Got to stay in positions where you’re good, and mot panic,” Schwab said. “In Bryce’s match, in particular, he didn’t panic in any situation. You’ve got to win tough, tough, gritty matches like that.”

Steiert then scored a reversal in the third period after starting down and rode Massa out for the 2-1 victory. Tomorrow morning Steiert will see Arizona State’s Joshua Shields for a spot in the semifinals.

Taylor Lujan didn’t waste much time in the second period after starting on top to dispatch Minnesota’s Devin Skatzka, earning the fall in 3:22.

“I didn’t get to see Lujan’s match, but that guy ( scrambles quite a bit and usually he wins those positions. And good to get bonus points.”

I can’t *really* describe his fall because it came in a typical-insane Lujan way, and I wouldn’t do it jusitce. Lujan will wrestle the number one seed and 2017 National Champion Mark Hall in the quarterfinals.

Foster came out and, similar to his first round win, shut down the offense of Lou Deprez. He lead 2-1 after the first period and 4-1 after a reversal and rideout in the second. The Panther racked up over two minutes of riding time in the match and another takedown in the third made the final 7-1.

“I feel good, definitely could move around more,” Foster said afterwards. “I was more hanging out, in ties, my last match. I want to be moving more, just keep the guys uncomfortable when I’m wrestling.”

On the backside Jay Schwarm got a win by pinfall in 4:48. Schwarm trailed 2-1 after the first before choosing the top position to start the second.

“Good for Schwarm, break the seal, get a first win in the national tournament. Just keep it rolling.”

While those four all earned wins, Josh Alber and Max Thomsen both fell in the second round. Alber lost a 19-10 major decision to Lock Haven’s Kyle Shoop, after the Bald Eagle reversed Alber and earned a four point nearfall. Shoop again turned Alber for four in the second period and rode him out. Alber made a comeback, scoring four takedowns in the third, but it was too late and Shoop got the upset victory.

Max Thomsen lost to the two seed Micah Jordan 17-4. Thomsen was unable to get to his offense early in the match and Jordan was able to take advantage. Both Thomsen and Alber fall to the backside of their brackets and will wrestle tomorrow morning.

“It’s sweet to get three, I know the year before (2017) we only had two, to get three in is sweet,” Foster said of his teammates efforts. “And we have all our guys wrestling tomorrow.”

Backside wrestling will start tomorrow’s session, and Schwarm will be up first, followed by Alber and Thomsen. Steiert, Lujan and Foster will all wrestle in-between consolation rounds. The third session starts tomorrow morning at 10 AM central time.

One thought on “UNI puts three in quarterfinals, all six still alive”