Hawkeyes Open NCAA Championships with a Perfect Round 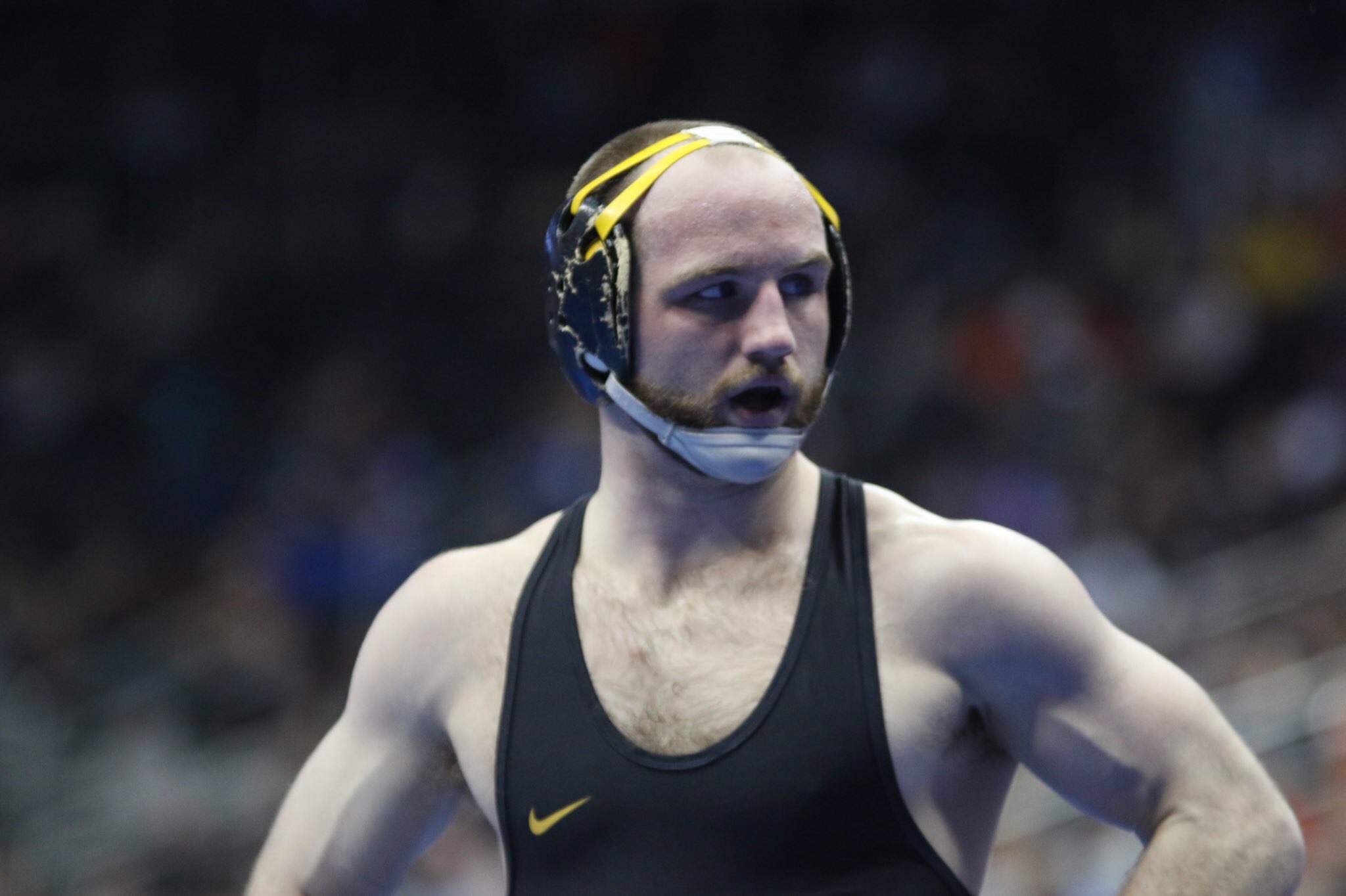 Iowa opened with a strong round in Session I of the NCAA championships held in Pittsburgh, Pennsylvania. The Hawkeyes advanced all of their nine wrestlers on the championship side of the bracket, including a pair of key upsets. Also of equal importance was Iowa’s bonus scoring, which has near the top of the pack in the team race, currently in fourth after Session I.

There was no match carrying more significance than the round one match between Iowa’s top seeded Alex Marinelli and Oklahoma State’s Joe Smith. After spending all season up at 174 pounds, Smith dropped down to the 165-pound weight class for the postseason. That is why the two-time All-American came in as the tournament’s #33 seed, and what put Iowa fans on edge early.

Smith looked strong in the first period taking a pair of takedowns against Marinelli, but it was the Hawkeye’s mat wrestling that put him ahead in this match. Smith chose the down position to begin the second and Marinelli put in a tough ride, which visibly drained the Cowboy. In the third Marinelli was able to nab a quick escape followed by a single leg takedown to pull ahead for the win.

With the 6-4 decision, Marinelli will advance Marineli to a second round meeting against North Carolina State’s Thomas Bullard, who is the bracket’s #16 seed.

But Marinelli wasn’t the only Hawkeye making noise in the first round, as freshman Max Murin earned an upset over fellow Big Ten wrestler Tristan Moran of Wisconsin, 3-2 to advance at 141 pounds. It was a tough season for Murin as he lost a few matches to higher ranked opponents, but in the month of March he has really come on by first taking seventh at Big Ten’s and now posting another key victory for his team. Murin is also one of four Hawkeye starters that hails from the state of Pennsylvania.

Tonight will be a rubber match between him and Illinois’s Mike Carr, who is the #6 seed. Murin dropped his regular season meeting with Carr after leading late in the third period. His win over the Fighting Illini came in the seventh place match at the Big Ten tournament.

The final upset scored by the Hawkeyes came at heavyweight, where Iowa’s lowest seeded wrestler, Sam Stoll pulled off a 8-5 over the #5 seed, Mason Parris of Michigan. In the early going of the match all of Stoll’s offense came from stalling penalties as Parris was wary of tying up with Stoll’s upperbody locks. Stoll picked up a takedown in the second to begin to pull away from his Michigan opponent and spent most of the third period riding to seal his win.

Up next for the returning All-American wrestler will be Northwestern’s #12 seed Conan Jennings, a wrestler that Stoll is undefeated against in college, including a couple wins by fall.

The rest of Iowa’s Pennsylvania quad looked at home in their first round matches as Spencer Lee (125), Ausin DeSanto (133), and Kaleb Young (157) all cruised to bonus victories in round one. Lee defeated Iowa native Bryce West by technical fall, 18-0 and will take on #14 Sean Fausz of North Carolina State.

DeSanto won his match by disqualification after his opponent Codi Russell of Appalachian State picked up too many stall warnings. Tonight, DeSanto will face Penn State’s Roman Bravo-Young, which was a match DeSanto won 12-8 when the two met at the Big Ten tournament.

Also winning by technical fall was Young, who defeated Dan Reed of Columbia, 16-1. He too will have a rematch from the Big Ten tournament when he faces Ohio State’s #11 seed Ke-Shawn Hayes in round two.

Pat Lugo came into this tournament facing an opponent that had defeated them in their previous meeting, but the 149-pound junior was able to reverse the outcome downing Arizona State’s Josh Maruca, 5-2. Up next is Virginia Tech’s Ryan Blees who is coming off an upset over #7 seed Kaden Gfeller. The two wrestlers have not met before.

Advancing at 184 pounds was junior Cash Wilcke, who picked up a narrow 3-2 decision over fellow Big Ten wrestler Nick Gravina in the opening round. He will now face one of the tournament’s top seeds, Cornell’s Maxwell Dean who is the #5 wrestler at 184 pounds.

After building a convincing lead freshman Jacob Warner looked to be headed for bonus territory in his match over Drew Phipps of Bucknell. Warner had a seven point lead (with riding time) with under a minute to go and was in on a scramble to secure a major decision. While rolling around Warner was caught on his back and gave up a takedown and four near fall points, which closed the match to 9-8.

Thanks to riding time Warner will be advancing on the front side of the 197-pound bracket and will take on Thomas Lane of Cal Poly in the next round. Lane is coming off an upset over #12 seed Rocco Caywood of Army. This will be the first meeting between these two wrestlers.

The next round of wrestling will take place tonight at 6:00 PM CT. ESPN will have coverage broadcast on their main channel, with all eight mats available for live streaming on ESPN3.

2 thoughts on “Hawkeyes Open NCAA Championships with a Perfect Round”