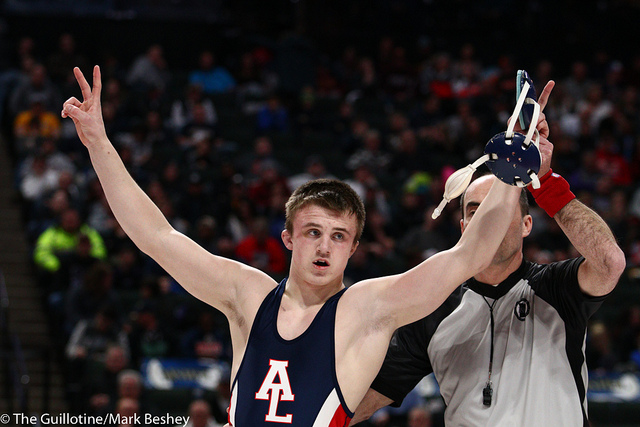 High school seasons across the country are finally reaching their conclusion and soon wrestlers will be making their transition from folkstyle to freestyle and Greco-Roman as the International season ramps up in the spring. With another season officially in the books we decided to take a moment to look back on the season that was for the University of Iowa’s current and future recruiting classes. The Hawks are in a unique position where they already have more verbal commitments in the class of 2020 than the class of wrestlers signed and coming into Iowa City next season.

Unsurprisingly, most of the future Hawks finished their season on top of podium at their respective tournaments. A few wrestlers came up short on their title aspirations, but the group still collectively produced an impressive five state titles, and eight medals overall.

The first recruit to compete at a state tournament was 2020 prospect Jesse Ybarra of Sunnyside, Arizona. Ranked 14th at 126 pounds by The Open Mat, Iowa fans are already looking forward to the potential lightweight recruit. This past month Ybarra finished as the state runner-up falling to Bobby Tellez. There is no reason to hit the panic button on Ybarra dropping his final match of the season. As a sophomore Ybarra won a Cadet national title out at Fargo and won two matches against national ranked Jeremiah Reno and Caleb Rathjen respectively at last fall’s Agony in Ames.

The Hawkeye recruits picked up a pair of state champions the following weekend as Cobe Siebrecht of Lisbon, Iowa and Abe Assad of Glenbard North, Illinois. Both wrestlers came into their respective state tournaments with an interesting storyline, and were hungry to win a title.

For Siebrecht it was the fact that he had already experienced coming up short of winning a title on two occasions, finishing as the runner-up as a sophomore and junior. He would not be denied on his third attempt as downed talented freshman Nick Hamilton of Underwood in the finals, by the score of 9-1. As a sophomore Siebrecht was downed by West Sixou’s Adam Allard, who recently won his third state title last month, and as a junior he was Alex Thomsen’s opponent in what would be his fourth state title match.

It should also be noted that Siebrecht hails from the storied Lisbon program that has produced a number of wrestlers that have gone on to Division I wrestling careers including current roster member Carter Happel (141) and assistant coach Ryan Morningstar.

For Assad it was a story of redemption. Heading into the postseason Assad was carrying an undefeated record until he was upset in the Sectional semifinals by Jon Halvorsen by the score of 2-1. The loss motivated Assad and as he tore through his state bracket pinning his way to the title. His final fall came against Halvorsen in the first period.

Other recruits in action that weekend were the brother duo of Mason City Cullan and Colby Schriever. Taking sixth due to injury was Cullan, who entered the state tournament as the top ranked wrestler. A broken ankle sidelined the two-time state champion for most of January and February with Cullan making his return for the postseason. After making it through Districts and his first two matches at state, Schriever suffered a shoulder injury which caused him to default in the semifinals.

His brother Colby came in with title aspirations of his own at 138 pounds. Unfortunately his bid was ended by Eli Loyd in the state finals, but Colby’s run to the finals was certainly impressive as he took out title contender Drevon Ross in the quarterfinals.

That left the Minnesota trio of Ryan Sokol of Smiley, Patrick Kennedy of Kasson-Mantorville, and Zach Glazier of Albert Lea who all brought home titles at their respective weights. Perhaps the most impressive feat was that all but one of the matches by the Hawk recruits ended in a bonus victory, and the only one that didn’t was Glazier’s 1-0 win over Cade King, who is ranked #20 in the nation. It was also the fifth time that the two had wrestled this past season.