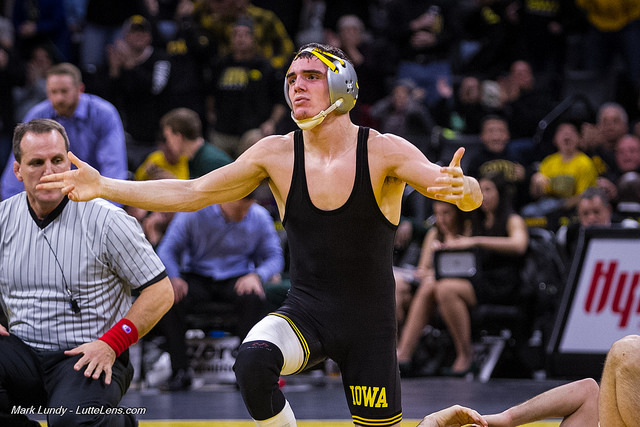 The Iowa Hawkeyes kept their unbeaten streak alive following a 48-0 beat down of Maryland inside their home arena. The Hawks took all ten bouts including bonus wins from eight of their wrestlers. It was the first shutout posted by the Hawkeyes since their season opener out at Kent State, where Iowa won 45-0 over the Golden Flashes.

Pat Lugo got the Hawkeyes off to a red hot start at 149 pounds. The junior rolled to a 23-8 technical fall victory over Pete Tedesco in the second period.

Kaleb Young looked like he was going to continue the bonus momentum as he was leading Ryan Diehl 8-1 at one point in the match, but a late comeback by the Maryland wrestler closed the gap to a 10-4 final.

At 165 pounds Marinelli was able to join Lugo in the bonus win department with his second period fall over Phillip Spadafora. Marinelli ran a high pace in the second period, but ended the period with just a 2-1 lead. In the second he managed to score an escape, takedown, before turning Spadafora over to his back.

Offense was a little bit harder to come by early on in the 184-pound bout as Wiclke took a 2-0 lead early in the second, and both of those points came from stalling penalties on Kyle Jasenski. Despite Jasenski efforts to slow the match down,Wilcke began to pull away in the second with three second period takedowns. He continued his offensive onslaught to end his match win 23-9 to give Iowa four bonus wins in their first five matches.

Not  to be outdone, Jacob Warner showed off his skills on his feet racking up five takedowns in the first period in his match against Nikko Cappello at 197-pounds. Warner continued that pace in the second and third periods to come away with a 24-9 technical fall.

That setup the dual’s lone ranked meeting between #5 Sam Stoll and #11 Youssif Hemida at heavyweight. There was no score through the first two periods with Hemida picking neutral in the second. Stoll picked down in the third and got an early escape for the match’s only score, winning 1-0.

Spencer Lee spent more time waiting to shake hands than he did wrestling as he took down Brandon Cray early and followed with a pin at the 30 second mark.

With regular starter Austin DeSanto sidelined due to a one match suspension it was Paul Glynn getting the nod at 133 pounds. For the second time of the evening Iowa went back-to-back with pins as Glynn put Orion Anderson in the first period.

With Iowa looking to finish the shutout, freshman Max Murin came out with the Hawk’s ninth and final bonus victory of the evening winning 12-3 over Danny Bertoni.