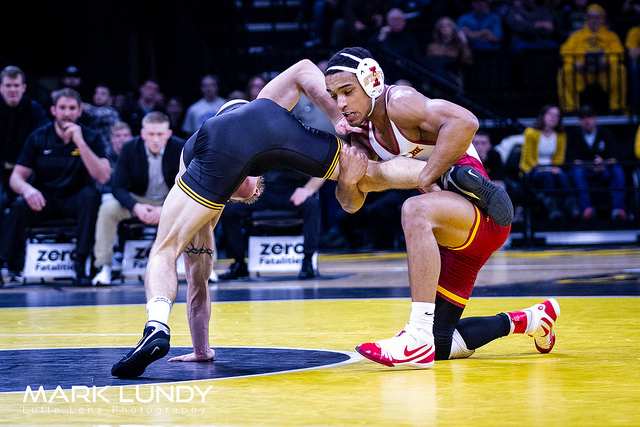 Safe to say the Cyclones bounced back with authority Friday night. It was their first shut out of a conference opponent since February 1st, 1996. Twenty three years to the day people, let that sink in for a moment.

Iowa State swept all ten matches. Of the ten, four by fall, two major decisions, and one forfeit.

Utah Valley comes calling Sunday afternoon. It will be their third dual in four days; they’ve yet to get a win in the Big 12. They do however, have upsets over No. 14 Rutgers, and No. 21 Purdue earlier this season.

I’ d look for more big points out of Alex Mackall, No. 13 Austin Gomez, and No. 13 Jarrett Degen on Sunday. These three Cyclones have combined for 53 wins this season. Their Wolverine counterparts have 23.

The first intriguing matchup comes at 141 pounds. No. 9 Ian Parker has been on an absolute tear, with no signs of slowing down. No. 11 Matt Findlay hasn’t wrestled in the first two stops this weekend for the Wolverines, but is listed as probable.

It was good to see Chase Straw put eleven points on the board in his match Friday night. That’s well above the team average of 7.8 points a match, coming into their dual against the Jackrabbits.

Zane Mulder brought the Hilton crowd to it’s feet in his debut! A fall in the first period of his collegiate debut…Awesome. He could face No. 10 Demetrius Romero, but he like Findlay, hasn’t wrestled yet this weekend.

Another ranked matchup comes at 174 pounds. No. 19 Marcus Coleman looks to take on No. 12 Kimball Bastian. Bastian wrestled on Thursday, but not on Friday. Haven’t seen anything about an injury. So it’s anybody’s guess whether he goes or not.

When he faces Will Sumner on Sunday, Sammy Colbray will notch win number twenty on the season with a victory.

A great opportunity presents itself at 285 pounds for Gannon Gremmel. A win Sunday over No. 12 Tate Orndorff would catapult him in the rankings, and do nothing but help his confidence going forward.

To put a bow on this, if Utah Valley wrestles all of it’s starters, this will be an exciting dual. If not, look for more big points from Iowa State.