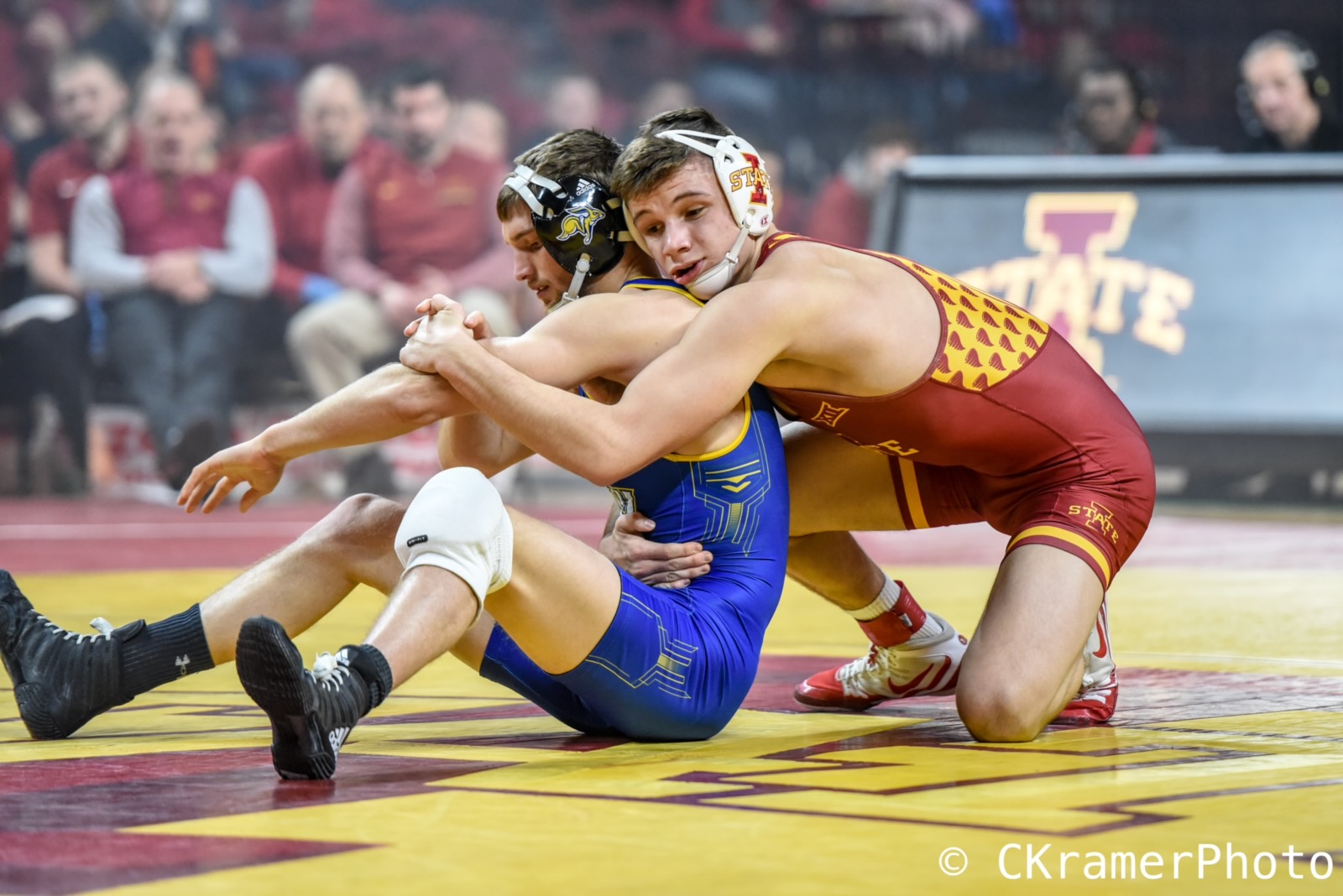 It marked the first time the Cyclones recorded a shutout vs. a conference opponent since defeating Missouri, 45-0 in 1996 and it was the largest margin of victory over a Division I team since 1998 (New Mexico, 57-0)

The Cyclones were aggressive all night, winning the takedown battle, 28-3.

Two first-period takedowns by Chase Straw propelled the junior to an 11-4 victory over Colten Carlson at 157 pounds to open the dual.

The 3,648 fans in Hilton Coliseum erupted in the 165-pound match. Zane Mulder, a true freshman competing in his first dual, shocked the fans with a pin at the 1:57 mark over Logan Peterson.

Mulder registered his second takedown in the first period and got the Jackrabbit in a cradle to record the fall.

Marcus Coleman major decisioned Samuel Grove (12-3) at 174 pounds, Sam Colbray picked up an 8-4 decision at 184 pounds and Willie Mikluswon by forfeit at 184, as the Cyclones went into intermission with a 22-0 lead.

Gannon Gremmel was the winner at heavyweight, defeating Blake Wolters, 5-3. Gremmel had two takedowns and rode out Wolters the entire second period to notch the victory.

Alex Mackall wasted little time in dispatching Gregory Coapstick at 125 pounds. Mackall raced out to an early 14-0 first-period lead behind a trio of four-point near-falls. He then turned Coapstick for the fall at the 2:24 mark.

It was more of the same in the 133-pound match, as Austin Gomez won by fall over Rylee Molitor at 4:52.

The marquee match was at 149 pounds, which pitted a pair of ranked wrestlers in No. 11 Jarrett Degen and No. 19 Henry Pohlmeyer. Degen fell behind early, as Pohlmeyer took a 4-2 lead on two first-period takedowns.

Degen chose down to begin the second period and recorded a reversal with :58 seconds left, riding out Pohlmeyer the rest of the way to head into the third period tied 4-4. Degen then capitalized off a failed Pohlmeyer granby roll with a half nelson to end the match at 5:48.

Next Up
Next up for the Cyclones is a matchup vs. Utah Valley on Sunday. First match is at 2 p.m. That match will be televised on Cyclones.TV.