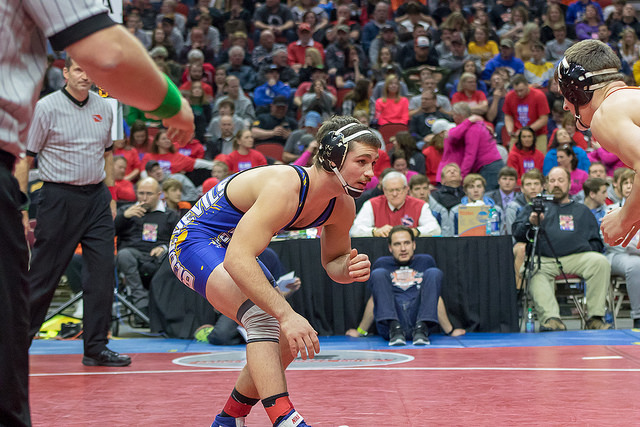 Fresh off a third place finish at the Southern Scuffle, the Cyclones head to North Dakota for a clash with the Bisons. It’s worth noting Iowa State finished third with only one finalist at the Scuffle. This shows the guts this team possesses, navigating through the backside of brackets, having six more starters finish on the medal stand.

At 125 pounds, after finishing on the podium at the Scuffle, Alex Mackall will look to knock off #9 Brent Fleetwood of NDSU. Alex is showing all the signs of pulling off the upset in this one.

In the only ranked matchup of the evening, #9 Austin Gomez takes on #15 Cam Sykora. Gomez put the country on notice at the Scuffle. In the semifinals, down 8-3 Austin tossed Roman Bravo-Young of Penn State to his back for the fall.

Ian Parker has been cleared to wrestle at 141 pounds. A slight concussion at the Southern Scuffle (Round of 16) forced Ian to medically forfeit out of the tournament. It will be a match-time decision if he will go, or not. Ryan Leisure looks to wrestle for Iowa State if Parker’s withheld.

Looking to build on an impressive first half of the season is, Jarrett Degen. Degen avenged his quarterfinal loss at the Scuffle to Russell Rohlfing (CSU-Bakersfield) by pinning him in their fifth place match. He brings a #11 ranking, up one spot from last week, at 149 pounds into his match against North Dakota State.

Chase Straw had a good showing at the Scuffle, placing seventh. Chase is starting to show some consistency at 157 pounds. As we all know, consistency is something Coach Kevin Dresser is drilling into his wrestlers.

Due to some injuries, true freshman Logan Schumacher looks to be the guy at 165 pounds for the Cyclones, in the interim. The pride of Martensdale-St.Mary’s takes the mat against previously ranked, Andrew Fogarty of North Dakota State.

At 174 pounds, Marcus Coleman had a record of 4-3 and finished sixth at the Scuffle. He battled his way back after Taking a loss to #1 Mark Hall in the quarterfinals. Coleman is a gritty young man, I look for him to come out firing on all cylinders, as he did against Ohio just before break.

At the Southern Scuffle, Sammy Colbray was a huge bonus point scorer at 184 pounds for the Cyclones. He had three falls on the tournament, that undoubtedly helped secure their third place team finish, the last one coming in his fifth place match. Completing his tournament on a high note.

Due to illness, #4 Willie Miklus didn’t make the trip to Chattanooga. He’ll no doubt be looking to score big points in his post Christmas break debut. Previously ranked, Cordell Eaton of North Dakota State is slated to be his opponent. Eaton is a product of North Scott high school where he was a three-time placewinner.

I’ve said it before, and I’m going to say it again, Gannon Gremmel is a grinder at 285 pounds. Gannon finished eighth at the Scuffle. He will likely see, highly recruited Brandon Metz of North Dakota State. Good test right out of the gate for Gremmel to kick off his second half of the dual season.