Rapid Recap: Iowa State Too Much For Ohio in Hilton Homecoming 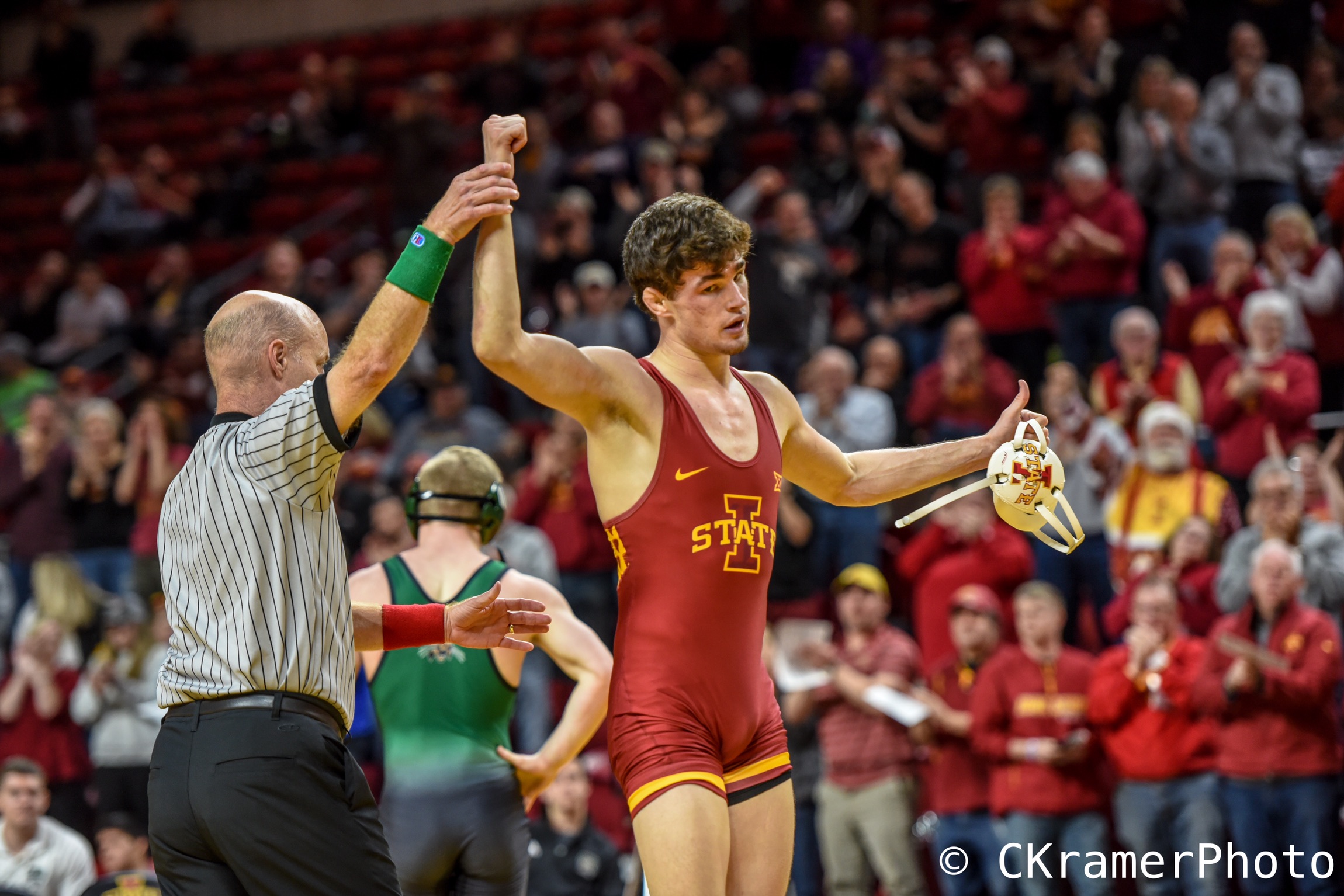 Up at 133, Austin Gomez finished a takedown with fifteen seconds left in the first to take the early lead. Gomez earned a point on a second stall call on Mario Guillen of Ohio. After a little back and forth Gomez got the job done for a 5-3 decision.

At 141 pounds, Ian Parker scored the first takedown and never looked back riding out Hagan the entire period. He earned a reversal in the second, and almost had a whipover but went out of bounds. Four nearfall points in the third, with some fancy footwork on the edge keeping his right toe in bounds on a tilt. He finished with over three minutes of riding time to score a 12-1 major over Kyran Hagan.

Jarrett Degen put on a takedown clinic in the first period. Scoring three takedowns in the first and then was up and out quick to start the second to take a commanding 7-2 lead. He ended it with a FALL over the Bobcat in the second period with four seconds left!

Chase Straw was down 7-4 late in the third, and in on the leg of Carson of Ohio, but time ran out before he could finish.

Skyler St. John got the nod at 165 pounds. Skyler was taking a lot of shots in the third, but he dropped a hard fought battle 4-3.

At 174, Marcus Coleman grabbed two takedowns in the first to lead 4-1. The Bobcat chose down to start the second, Coleman intentionally released him after acquiring riding time. Couple more takedowns by Coleman to lead 8-4 heading to the third. Marcus would dominate the third to finish the match major decision 14-6.

Sam Colbray gave up a takedown, but was out right away in the first. He chose down to start the second and was out on the whistle. A takedown with fifteen seconds left in the second had Colbray up 4-2 after two. Yaergen chose down to start a crazy third period. An escape and a takedown of his own then a Colbray reversal brought the match to 8-6. Yeargen was dinged with his second stall, giving another point Colbray. THEN a crazy scramble at the end, went to review to challenge a Colbray takedown in the waning seconds. Iowa State would win the challenge and the Hilton crowd went wild! Colbray by 9-8 decision.

With the crowd in a frenzy, Willie Miklus scored two takedowns and eight nearfall points to lead 12-1 after the first. Another pair of takedowns gave Willie the tech fall 17-2

At 285lbs, Gannon Gremmel closed out the dual for the Cyclones with a pair of takedowns for a 33-6 dual victory over Ohio.