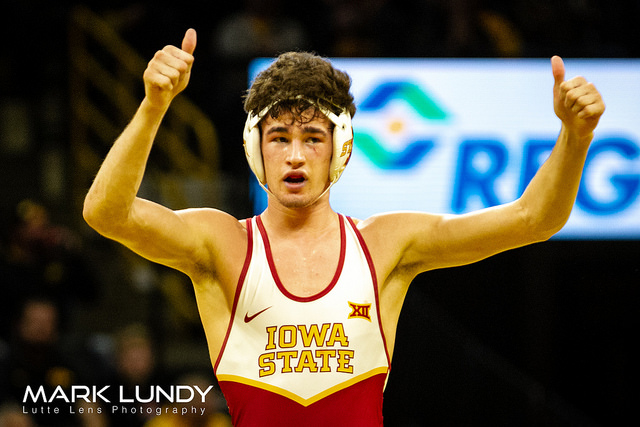 Iowa State will finally make their dual debut at Hilton this Sunday. The Cyclones have been on the road for over a month, and Iowa State fans are ready for Cyclone wrestling!

One week till @CycloneWR is back in Hilton!

Alex Mackall will have yet another test when he battles No. 15 Shakur Laney. Mackall was the 125 pound champ at the UNI Open last weekend.

Last time out for Austin Gomez was nothing short of amazing. Against Austin DeSanto of Iowa, needing at least a tech fall to get the dual win, with the score tied Gomez threw him to his back for six points with under thirty seconds left in the match. That win catapulted him to No. 10 at 133 pounds in the next set of rankings.

Coming in at No. 12 in the rankings at 141 pounds is Iowa State’s Ian Parker,  who last time out had a big win over in-state rival Max Murin. Parker used a late takedown as well to secure the match.

Jarrett Degen, who jumped up one spot in the rankings released Tuesday, checks in at No. 8 at 149 pounds. Degen enters Sunday’s dual with an 8-1 record. A couple weeks ago in Carver against Pat Lugo, he got an escape and takedown in tiebreakers to get the 7-4 victory

At the UNI Open, Marcus Coleman took home the title at 174 pounds with a major decision in the finals over Austin Yant of UNI 22-10. He’ll look to improve on his 9-3 record Sunday against the Bobcats.

A big win, against then ranked No. 8 Cash Wilcke, propelled Sam Colbray into the rankings on December 4th at No. 18 at 184 pounds. Colbray jumped to No. 17 in the rankings released last Tuesday. It’ll be interesting to see what that win in Carver has done for his confidence.

Southeast Polk grad, and seasoned veteran, Willie Miklus is now ranked No. 6 at 197 pounds. Some said it was a controversial call at the end of his match with Jacob Warner, but Miklus wasn’t having it, stating that it was a good call.