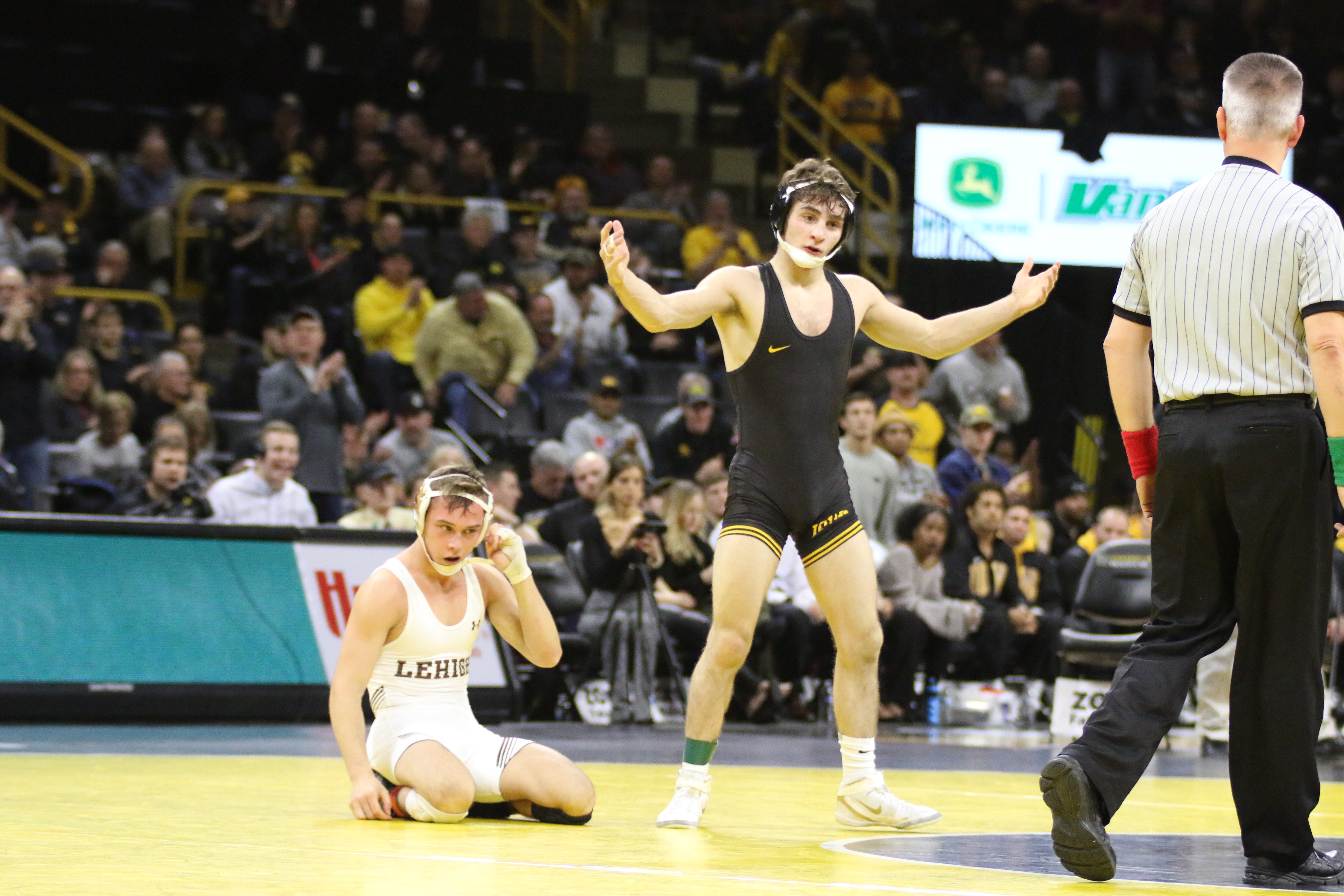 The Iowa Hawkeyes improved to 6-0 on Saturday night after their 28-14 victory over the Lehigh Mountain Hawks. The Hawkeyes won the opening six bouts in the dual, and seven out of ten total to bring home the win inside Carver-Hawkeye Arena. Iowa was bolstered by five of their starters putting in bonus point performance, inducing an impressive four in a row to begin the action.

The dual kicked off at 125 pounds where #1 ranked Spencer Lee made short work of Lehigh’s Luke Resnick, racking up 15 points in the first period to put the Hawkeyes up 5-0 early. Lee came out with heavy hands that snapped Resnick down to the mat for a takedown early on in the match and from there a trio of four point near fall turns to end it.

After falling victim to upset last week, sophomore Austin DeSanto came out with a purpose in the second match earning two takedowns in the first period, with the second coming on short time to go up 4-1 early. DeSanto piled on six more points in the second period coming by way of reversal and a pair of takedowns. In the third DeSanto tacked on three more takedowns to put the match away with a bonus victory.

Also looking to rebound from an upset a week ago was Hawkeye freshman Max Murin who took on Dan Moran at 141 pounds. Murin scored the third straight bonus victory for Iowa thanks to a big first period. Early in the match Murin was able to secure a takedown and turked Moran over for four nearfall that put him up big early. Three more takedowns in the second and third periods made the final 14-3.

The 149-pound meeting was a very controlled win for Hawkeye Pat Lugo who faced Jimmy Hoffman. The junior was in the driver’s seat the entire match and nearly managed to put Hoffman away with a first period cradle before time expired. Lugo added a pair of scores in the second and third periods to win 12-3.

That set up a meeting between Kaleb Young and Josh Humphreys to close out the first half of the dual. While Humphreys is unranked by The Open Mat, several other ranking services have taken note of the Lehigh’s strong start to his career which made the 157-pound arguably the best matchup in the first half of the dual. Young struck first in the match with a takedown, but Humphreys managed to get out quick. A second period escape by Young followed by third period rideout put aways the match for a 4-1 win for the sophomore.

Starting the second half of the dual was sophomore All-American Alex Marinelli who charged out to a 6-2 lead in the first period scoring three takedowns on Trey Cornish. An offensive barrage broke out in the second period as Marinelli poured on the takedowns to increase his lead to 17-5 after the second period. With the technical fall well in hand Marinelli worked for the fall but a Cornish stall out lead to prevented Marinelli the opportunity.

After last week’s injury to freshman Myles Wilson the Hawkeyes were in need of some new blood at 174 pounds and they found their answer in Jeremiah Moody. The Hawkeye junior began the season at 157 pounds, but after losing the spot to Young and with his team needing someone to fill into the lineup Moody answered the call taking on #6 Jordan Kutler. It was there Lehigh got their first victory in the dual as Kutler downed Moody 12-3.

Cash Wilcke brought the crowd back to life in his 184-pound bout against Andrew Price. After a scoreless first Price took a 3-0 lead with an escape and takedown. Wilcke was able to get out in the second to cut the deficit to 3-1, which made all the difference. In the third Wilcke got an escape and takedown to take his first lead 4-3. With a minute left Price managed to get out to knot things at four points. The match was then decided in sudden victory as Wilcke was able to secure single on the edge to end the match.

Lehigh responded at 197 pounds as the ranked Jake Jakobsen took out Hawkeye backup Steven Holloway by fall in the first period.

With the dual meet well in hand Iowa opted to send out freshman Aaron Costello to face the #6 ranked Jordan Wood at heavyweight. The young Hawk was unable to counter Wood’s leg attacks as the Mountain Hawk wrestler came out on top in the final matchup by the score of