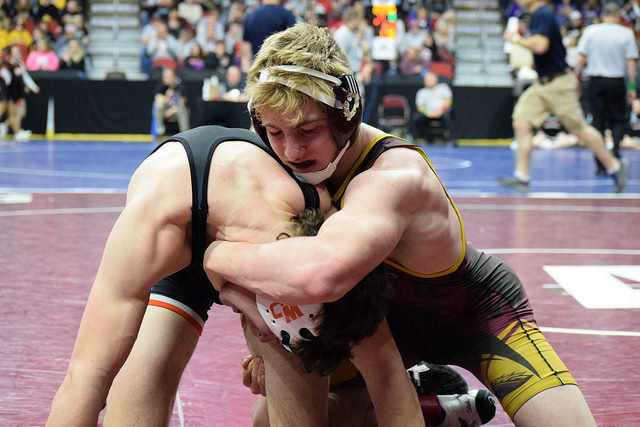 While none of these are stand out teams there will be some really good wrestlers in this sectional. Andrew Flora (ADM, Adel) , Cody Fisher (Woodward Granger) & Skyler Noftsger (Ballard) are all top talents in 2A. Van Meter is a program on the rise with guys like Caleb Swalla, Derrin Sesker and Colby Wiederholt leading the charge.

Webster City lost a lot of fire power from last year but still has Drake Doolittle. Perry dropped down to 2A and will be led by state runner up Kaleb Olejniczak. Overall this looks to be one of the easier sectionals and there will be plenty of chances for guys to get through.

Assumption lost some seniors from last years squad and will be adjusting to a new coach after long time head man Pete Bush stepped down after last season. They are always tough though and I expect them to surprise some people this season as well led by Iowa State commit Julien Broderson. Monticello returns 3 state place winners with Chase & Kain Luensman and Lake Stahlberg. Central Dewitt will be very strong in the lower weights with Zeimet and Howard but don’t have much else for proven guys. Depending on weights there could be some interesting battles in the middle weights with guys like Baylor Crigger (Camanche), Abe Michel (Maquoketa) and Kole Kreinbring (Assumption).

Dubuque Wahlert are the defending state champs but lost some serious fire power. West Delaware should be one of the favorites in class 2A this year as they are still fairly young but loaded with talent. Mount Vernon is always good and a tough out for anyone. 170 could be the weight to watch here as place winners Paul Ryan (Mount Vernon) and Jack Neuhaus (West Delaware) return and Connor Dehn (Dubuque Wahlert) will be really good too.

Clarion-Goldfield-Dows has proven to be one of the best programs in class 2A in recent years and they will be the favorites here again. They will have a solid lineup led by Spencer Trenary and Reed Abbas. If Humboldt’s Joey Busse gets back to 145 he will be a preseason favorite at that weight. Kyler Fisher of Southeast Valley is probably one of the most over looked guys in Iowa and will compete for a state title at whatever weight he goes. There could be a good battle at 285 to follow Trenary with McKade Eisentrager (Iowa Falls), Clayton McFarland (Southeast Valley) and Justin Jones (Humboldt).

Osage will still be young this year but don’t sleep on the Green Devils as they will be really solid and could get quite a few guys through. Charles City is one of those programs that will always produce some tough kids and will be led by a couple returning state place winners in Dylan Koresh and Jack Sindlinger. Eric Faught is Clear Lake has placed top 3 at state every year and will look to close out his high school career with that elusive state title. Kade Hambly (Clear Lake) and Dalton Chipp (Hampton-Dumont) both had great post season runs last year at 195 and it should be a fun matchup all the way through the postseason.

Creston has been so good for a long time but won’t return as many proven guys this year and have a new head coach. However, this sectional will be plenty good with a tough Winterset team and a rising Red Oak program. Red Oak will return 5 state qualifiers and will be led by place winners Thomas Bentley and Justin McCunn. Jack West returns for Winterset and will look to climb higher on the stand along with qualifiers Kruise Kiburz and Bryce Hatten and a good core around them. Red Oak will be strongest in the upper half of there lineup while Winterset will be better in the first half.

Atlantic returns the McLaren’s and Connor Pellet along with most of there 2018 lineup. They always seem to have a couple guys step up too and should be really solid once again. Benjamin Schmitz of Kuemper had a great season last year and will be a favorite to be near the top of the podium again. Sergeant Bluff Luton May be the favorite in this sectional though led by hammers like Jack Gaukel and Easton Graff that should place really high in Des Moines. They return 10 starters from last year and I expect guys like Nate Curry and Isaac Bryan to have good years as well.

Union, LaPorte City has had a good program for a long time and they should be really tough again this season. They return Kolten Crawford and  Jack Thomsen return from top 4 finishes as well as qualifiers in Adam Ahrendsen and Lane Albertsen. Independence will be led by Matthew Doyle and always has some guys who surprise people. Cole Davis was one who spent some time in the rankings last season.

This will be a tough sectional and there will likely be some good kids left home from this district again. New Hampton lost some big names but don’t worry about the Chickasaws as they will be in the mix in class 2A again and return place winners in Rosonke and Rasing. Crestwood should also be really solid again as well with place winners Anderlik and Colton Bye returning and fab freshman Carter Fousek coming in. Rasing and Bye could be a fun matchup if they’re at the same weight. Max Babcock (New Hampton), Gunner Rodgers Jr (NFV) and Jackson Rolfs (Decorah) had some battles last year and all 3 return.

PCM, Monroe might just be the early favorites in the 2A team race going into this season. They return state champion Lucas Roland along with major fire power  in guys like Wes Cummings, Colby Tool, Jarron Trausch, Landon Fenton & Payton Drake. If they can get some more guys to Des Moines it would be a big boost. Carlisle moves down into class 2A and have returning place winner Carter Logue. Bondurant-Farrar is a program making gains and will be led by place winner Colby Lillegard.

Albia will be led by one of the states best in 2 time state champ Aden Reeves. They will also return Landon Turner from injury and Dominick Morris who was ranked much of last season and was victim of a weird call at sectionals that kept him home last season. EBF will have a solid lineup again this year with guys like Trestin Sales, Tyler Landgrebe, and Sage Walker leading the way. Brock Beck of Grinnell placed 6th and Jalen Schropp of Williamsburg placed 5th last season and both are very capable of improving on that. The lower weights should be really tough in this sectional.

Bishop Heelan is coming off a great season and should be really good again this year. They will return a handful of state qualifiers led by place winners Brennan Todd and Kobe Clayborne. 182 could be a fun weight as Luke Jenness of Sheldon returns after placing in 17 and qualifying for state last season. He could be challenged by a tough Kolton Bus of Central Lyon and Chayce Hooyer of Sioux Center.

Spirit Lake Park will be led by a couple of hammers in state finalist Kyler Reick and place winner Dakota Powell who might be the early favorite at 220 in class 2A. Mason Hill of Cherokee, Washington returns after leaving 8th last season and should make some noise if he can return to 106. Jason Peta of Estherville took some losses last season but wrestled well at be end and made the stand at 113 in Des Moines. Estherville will sorely miss Lincoln Coakley this season as he is done wrestling after a terrible accident this offseason.

Centerville returns 3 guys who placed top 3 at state last  season in Matthew Lewis (1st), Nathaniel Genobana (2nd) & Kayden Kauzlarich (3rd). They are the only three 2018 state place winners in this sectional. After placing in 2017 Washington’s Tristin Westphal-Edwards had a rough state tournament but will be looking to get back on the podium this season along with teammate Walker Ikerd who qualified last season as well. West Burlington has a new coaching staff and returns three state qualifiers in Griffin Molle, Caleb LaLonde & Tucker Moore.

This should be a fun team race between Solon and West Liberty. Both should have really solid lineups and return a lot of starters. Solon returns 4 state qualifiers led by place winners Zeb Gnida & Zack Bevans. They also have dynamite freshman Hayden Taylor entering the lineup this year as well. West Liberty returns 5 state qualifiers including Will Esmoil who placed 3rd in 2017. Columbus Community will be led by 2 time state finalist Jarod Kadel and Cam Rice who placed 8th last season. John Crowley of Tipton is also a returning place winner after finishing 7th at 126 last season.