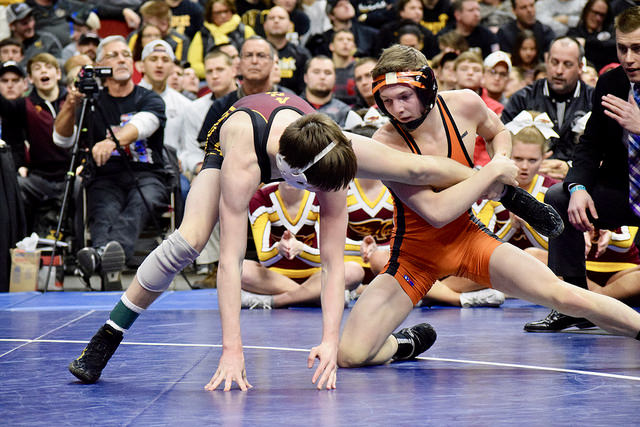 The honor of being the state’s top available senior currently belongs to Valley-WDM’s Nick Oldham, who we rate as the 10th best wrestler in the state overall in the Fab 50. Nick takes over the top slot after Davenport Assumption’s Julien Broderson made his verbal to Iowa State this past weekend.

We’ve said it many times now, but the last 12 months have been really good to Oldham, who has downed nationally ranked opponents and won his first state title during that stretch.

That success has led to four Division I programs checking on the Valley Tiger with Big Ten powerhouse programs Ohio State and Minnesota headlining, followed by the rising South Dakota State, and Edinboro rounding out the list. In an earlier interview with IAwrestle Oldham stated his list wasn’t a final four as he is hoping to once again increase his stock with a big performance at the Super 32.

On Oldham’s heels is Clear Lake product, Eric Faught who will be chasing his first state title this season. There is a good chance that Faught will be the favorite to win his 2A weight class, but fellow Fab 50 member Kaleb Olejniczak may have something to say on the matter with the news coming out that Perry will be returning to 2A this season.

Faught has always been a force since he stepped on to the mat as a freshman, and the Clear Lake wrestler has already competed in two state finals. After coming up just short on a couple of occasions Faught is hungry to finish the job on Saturday night. You can read’s 2A analyst Lars Underbakke’s full thoughts on Class 2A here.