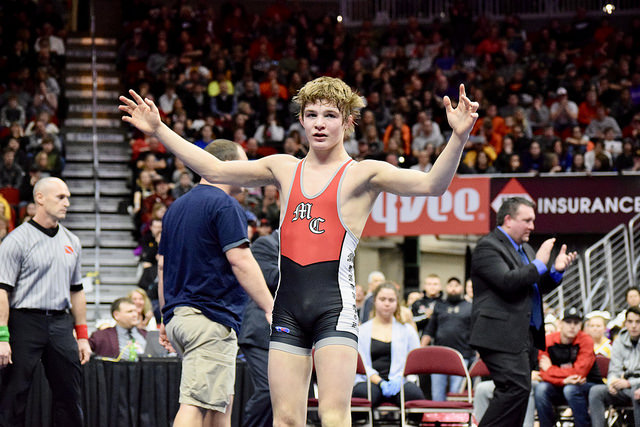 The recruiting season is heating up as we enter the fourth weekend in which college programs can host official visits for athletes in the classes of 2019 and 2020.  This weekend the University of Iowa will have their largest group of recruits on campus, with eight wrestlers making the trip to Iowa City. The Hawkeyes will be bringing in talent from all across the country, as well as several big instate names, for the visit.

Thanks to their colleagues on the gridiron, the wrestling team was fortunate enough to have their recruiting weekend fall on the same day as a nationally televised night game between the Wisconsin Badgers in Kinnick stadium. This also means that the team’s wrestling practice, which is open to the public, will begin later in the morning. Scheduled start time is 10:00 AM in the Dan Gable Wrestling Complex of Caver-Hawkeye Arena.

So who are the eight high school athletes that are visiting Iowa this weekend? For starters the group is a 5-3 split between the classes of 2019 and 2020 respectively. Three of the 2019 athletes should come as no surprise with two of them current verbal commitments, Abe Assad and Zach Glazier. The other name is Davenport Assumption prep Julien Broderson, who informed IAwrestle earlier this summer that he would be visiting Iowa this weekend.

In June Glazier became the first member of Iowa’s 2019 class, as the Minnesota native announced his news while attending the university’s annual wrestling camp. A couple months later Glazier would be joined by Assad, who was coming off of a bronze medal performance at the Cadet World Championships. The duo are ranked #11 (Assad) and #68 (Glazier) by The Open Mat (TOM) and project in the upperweights.

Joining Broderson in the class of 2019 are targets Brevin Balmeceda of Florida and Cobe Siebrecht of Lisbon, Iowa. Iowa has strong ties to all three wrestlers. Broderson wrestled under former Iowa NCAA champion Pete Bush, though the two-time state champion is currently considering several schools at this point.

Balmeceda is ranked #10 by TOM and he currently projects in the 157-165 range. His ties are more recent as Balmeceda competes for the same high school that current Hawk Pat Lugo did.

That leaves us with the three targets in the class 2020 yet to discuss, Mason City duo Cullan and Colby Schriever and Arizona prep Jesse Ybarra. As far as TOM rankings go Cullan Schriever is the biggest name coming in at #12 while Ybarra checks in at #26. Fans of Iowa USA Wrestling should already be familiar with Ybarra as he took down Ankeny star Caleb Rathjen in the finals of Fargo earlier this summer.

Cullan’s twin brother Colby is no slouch in his own right as the state medalist has come within inches of medaling at various national tournaments.

As an additional nugget IAwrestle has learned that the Hawkeyes have strong interest in New Jersey prep Robert Howard, the nation’s #2 ranked wrestler in the class of 2020. While Iowa’s interest may not be the world’s best kept secret, we do know that the Hawks plan on hosting the junior sometime in November.